Posted Aug. 16, 2016
July 2016 was the warmest July in 136 years of modern record-keeping, according to a monthly analysis of global temperatures by scientists at NASA's Goddard Institute for Space Studies (GISS) in New York. 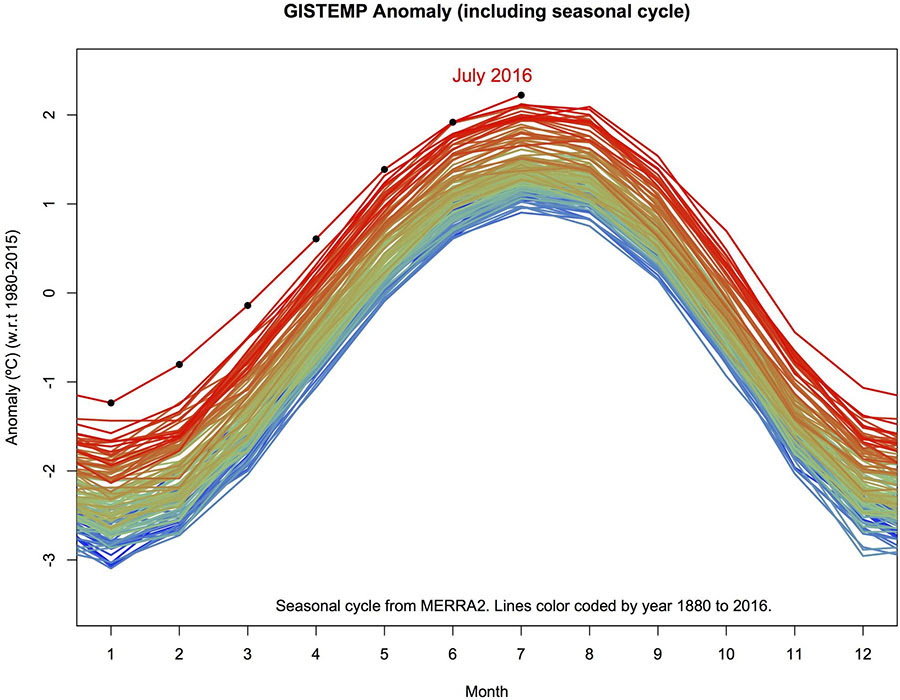 Because the seasonal temperature cycle peaks in July, it means July 2016 also was warmer than any other month on record. July 2016's temperature was a statistically small 0.1 degrees Celsius warmer than previous warm Julys in 2015, 2011 and 2009.
“It wasn't by the widest of margins, but July 2016 was the warmest month since modern record keeping began in 1880,” said GISS Director Gavin Schmidt. “It appears almost a certainty that 2016 also will be the warmest year on record.”
The record warm July continued a streak of 10 consecutive months dating back to October 2015 that have set new monthly high-temperature records. Compared to previous years, the warmer global temperatures last month were most pronounced in the northern hemisphere, particularly near the Arctic region.
The monthly analysis by the GISS team is assembled from publicly available data acquired by about 6,300 meteorological stations around the world, ship- and buoy-based instruments measuring sea surface temperature, and Antarctic research stations. The modern global temperature record begins around 1880 because previous observations didn't cover enough of the planet.