0 shares
Share on FacebookShare on Twitter Newsletter
The following book review is part of a series originally published in the Journal of the Oasis Foundation. The six books selected highlight aspects of aspects of Christianity and Islamic history and culture in the Middle East and their bearing on the situation in the region today. Oasis was founded in 2004 in Venice to encourage mutual understanding and opportunities for encounter between the Western world and the Muslim majority world. According to Oasis, “interreligious dialogue involves intercultural dialogue because religious experience is always lived and expressed through the medium of culture: not merely at the theological and spiritual level, but also at the political, economic, and social ones.”
***** 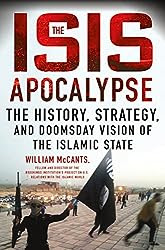 The ISIS Apocalypse: The History, Strategy, and Doomsday Vision of the Islamic State
by William McCants, St. Martin's Press, 256pp
The Isis Apocalypse, one of the best books on ISIS published, takes the reader on a virtual tour of the Islamic State from its origins to the present day, and explores the obscure allusions to Islamic history and theology that crop up regularly in the writings of its ideologues.
Abū Mus‘ab al-Zarqāwī, the ruthless and bloodthirsty former leader of al-Qaeda in Iraq, drew his inspiration precisely from medieval history, and was a particular admirer of Nūr al-Dīn Zengī (Nureddin), the great adversary of the Crusaders in twelfth-century Syria. After the American invasion of 2003, Zarqāwī decided to attempt a replay of Nureddin’s exploits by launching a campaign of terror against the modern “Crusaders” and their Muslim allies, and thus set the stage for the emergence of the Islamic State in Iraq.

McCants is masterful in documenting how the leadership of al-Qaeda, and Osama Bin Laden in particular, were wary of Zarqāwī’s plan. Schooled by previous failures, Bin Laden cautioned the Iraqi group on several occasions against the dangers of prematurely proclaiming a full-fledged jihadist state, which by its very nature would immediately attract an international military response.
But the “fatal attraction” of the Islamic State, the ultimate destination in the jihadist utopia, prevailed over Bin Laden’s warning. Zarqāwī was killed before he could carry out his plan, and so it was his successor, Abū Ayyūb al-Masrī, who got to proclaim the Islamic State, and entrusted the leadership of the new entity to Abū ‘Umar al-Baghdādī on 15 October 2006. A few months later the infamous black flags were hoisted, which in their fabrication and colour resembled those used by the Prophet and the Abbasid caliphs.
Initially, however, Bin Laden’s prophecy seemed to come true. Lacking a solid popular base, and having antagonized the Sunni tribes, the Islamic State quickly lost ground. Analysts – as well as the jihadists who had remained affiliated to al-Qaeda – scornfully dismissed it as a “paper state.” One day, even al-Masrī’s own Yemeni wife asked polemically her husband: “Where is the Islamic State of Iraq that you’re talking about? We’re living in the desert!”.

The authoritarian and arrogant style of al-Masrī and al-Baghdādī, their brutality, and the apocalyptic fervour that drove them (on several occasions they gave orders to attack in conditions of great disadvantage in the belief that the Mahdi – the Muslim Messiah – would intervene to save them) soon put an end to their effort. Abū Bakr al-Baghdādī, learning from the failure of his predecessors and taking advantage of the changed geopolitical circumstances, transformed the scraps of the “paper state” into the caliphate, which was proclaimed on 29 June 2014. According to McCants, the new leadership of Isis has gradually downplayed the Mahdi’s role in favour of the caliph’s in its discourse.
The millenarian dimension, though still present, has been postponed to a later date because, according to an Islamic tradition, twelve righteous caliphs must succeed one another before the end of the world.

The book has the great merit of setting out the relevant facts, through an analysis of original documentssuch as declarations from Salafi ideologues, letters exchanged between Bin Laden and the leader of al-Qaeda in Iraq that were intercepted by US intelligence, and diatribes on jihadist forums and social networks, and uses transcripts of conversations with jihadi prisoners and ex-prisoners.
What it lacks, unfortunately, is any analysis of the relations between the Islamic State and non-jihadi Muslims or of the treatment of religious minorities. Indeed, of this latter question the book makes no single mention. These reservations notwithstanding, at a time when literature on the Islamic State amounts to little more than instant books, The Isis Apocalypse is an essential tool for understanding the actions of Isis and the ideology behind them.

Although there are 65 million refugees scattered across the globe, I have only met a couple of them, both from Sudan. According to the migration expert from the University of Virginia interviewed below, my experience must be pretty typical. I live a comfortable life in a stable, wealthy country and have no idea of the suffering endured by refugees in countries like Colombia, the Democratic Republic of Congo or Pakistan.
Most news stories about refugees focus on violent conflict, such as the situation in Syria. But when there is no grand geopolitical clash, millions of people are ignored by Western media. My two friends both had the same experience of dreary year upon dreary year in a dusty camp in northern Kenya, where nothing ever happened. Is there a solution? Christine Mahoney believes there is. Read her recommendations below.