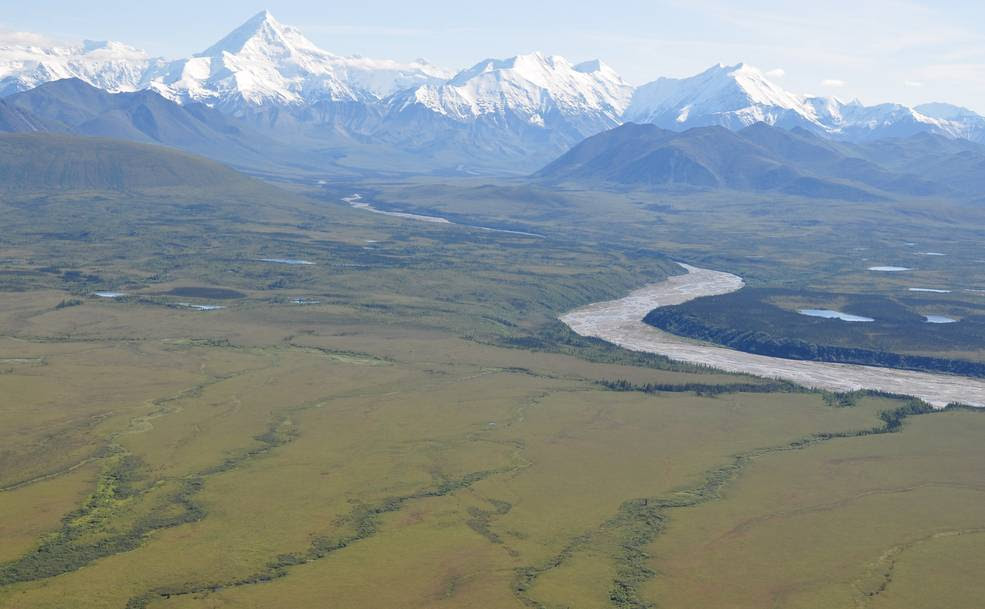 The ABoVE campaign will combine field work, airborne surveys, satellite data and computer modeling to study the effects of climate change on Arctic and boreal ecosystems, such as this region at the base of the Alaska Range south of Fairbanks.
Credits: NASA/Ross Nelson
As part of a broad effort to study the environmental and societal effects of climate change, NASA has begun a multi-year field campaign to investigate ecological impacts of the rapidly changing climate in Alaska and northwestern Canada, such as the thawing of permafrost, wildfires and changes to wildlife habitats.
The Arctic Boreal Vulnerability Experiment (ABoVE) will bring together on-the-ground research in Alaska and northwestern Canada with data collected by NASA airborne instruments, satellites and other agency programs, including SMAP, OCO-2, and upcoming ICESat-2 and NISAR missions.
Over the next decade, scientists from NASA and other public and private organizations will investigate questions about the formidable region that spans about 2.5 million square miles (6.4 million square kilometers).
"Boreal forests and tundra are critical for understanding the ecological impacts of Earth’s changing climate," said Jack Kaye, associate director for research in NASA’s Earth Science Division in Washington. "These ecosystems hold a third of the carbon stored on land – in trees, shrubs, and the frozen ground of the permafrost. That’s a lot of potential greenhouse gases in play. We need to better understand these ecosystems, and how a warming climate will affect forests, wildlife and communities both regionally and globally."
ABoVE includes three project phases and two seasons of intensive airborne surveys. The research activities will be coordinated with other U.S. and Canadian partner organizations. The 21 projects selected for the first phase will investigate topics such as the impacts of wildfire on ecosystems and insect outbreaks on forest health.
"The region is rapidly changing, and we’ve already seen a lot of that from field measurements and remote sensing," said Scott Goetz, ABoVE science team lead and deputy director at Woods Hole Research Center in Falmouth, Massachusetts. "It’s an area that’s warming with climate change, and there’s a lot of potential for permafrost degradation, especially with these massive fires burning off the organic soil layer."
The field campaign will provide an opportunity to study how Arctic ecosystems respond to the scorching fires on a regional scale. More than 5 million acres in Alaska and 9.7 million acres in Canada have burned so far this year, making 2015 the second most devastating fire year on record for Alaska, with the most intensive three-week period of burning on record, according to Charles Miller, deputy science team lead for ABoVE at NASA’s Jet Propulsion Laboratory (JPL) in Pasadena, California.
ABoVE researchers will survey Alaska’s interior forests to better determine how much carbon is stored in these remote regions. They’ll investigate the extent and thawing rate of permafrost – soils that have been frozen for hundreds of thousands of years, locking in carbon-rich plant and organic matter.
“Warming air temperatures can thaw permafrost, which acts like unplugging a deep freezer,” said Peter Griffith, ABoVE chief support scientist at NASA’s Goddard Space Flight Center in Greenbelt, Maryland. “The vegetation and carbon previously frozen in the soil starts to rot and decay – like food in an unplugged freezer – releasing methane and carbon dioxide into the atmosphere. This increase in greenhouse gases further warms air temperatures, perpetuating the cycle by causing more thawing and more greenhouse gas release.”
The ABoVE projects also will study impacts on the wildlife of Alaska and northern Canada, including habitat and migration changes for raptors, songbirds, Dall sheep, moose, caribou, wolves and brown bears.
The socio-ecological impacts of climate change will be a significant focus of the campaign. The Dall sheep study, for example, will examine the effects of their changing habitat on subsistence hunting and tourism. Another researcher group will work with village residents in the Yukon-Kuskokwim River Delta of western Alaska to track changes in vegetation, permafrost, fire and lakes.
“More societal impacts of change will be investigated in future projects, with another call for projects scheduled for 12 to 18 months from now,” Griffith said. "What’s happening in the Arctic is not staying in the Arctic. It certainly matters to the people who live there, but the consequences are far reaching."
The ABoVE field campaign’s research agenda was developed through workshops that brought together scientific experts from across the United States and Canada, and builds on ongoing NASA projects including the Carbon in Arctic Reservoirs Vulnerability Experiment (CARVE) and Airborne Microwave Observatory of Subcanopy and Subsurface (AirMOSS) airborne missions.
For more information about the ABoVE campaign, visit:
http://above.nasa.gov/
-end-
Steve ColeHeadquarters, Washington202-358-0918stephen.e.cole@nasa.gov
Rani GranGoddard Space Flight Center, Greenbelt, Md.301-286-2483rani.c.gran@nasa.gov
Alan BuisJet Propulsion Laboratory, Pasadena, California818-354-0474alan.buis@jpl.nasa.gov
Editor: Gina Anderson
Publicado por salud equitativa en 11:15 No hay comentarios: