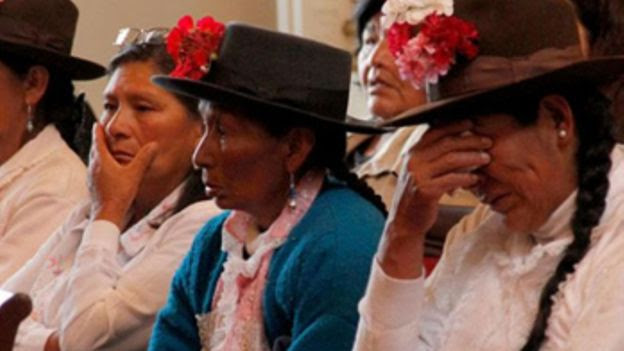 Most of the victims of the sterilization campaign were poor indigenous women / BBC
"A nurse put me on a stretcher and tied my hands and feet," said Sabina Huillca. "I asked them to bring me my little baby girl but instead they anesthetized me. When I woke up, the doctor was stitching my stomach. I started screaming, I knew I had been sterilized."


In Peru, during the presidency of Alberto Fujimori, 272,000 women and 22,004 men were sterilized between 1996 and 2000 as part of the National Reproductive Health and Family Planning Program. Most of the men and women were indigenous, poor, and living in rural areas. The program's alleged aim was to eradicate poverty through lower birth rates, but evidence has emerged over the years that it was coercive and blatantly violated reproductive rights.
Over 2,000 women have testified that medical practitioners performed the procedures against their will. In many cases, the women did not speak enough Spanish to understand what they were consenting to and in some cases, providers did not even go through the motions of obtaining informed consent. Some women have shared stories of providers offering them money to have the procedure or intimidating them with threats or violence.   Some women died due to complications and other women still suffer serious health complications today.


Last month, Public Prosecutor Marcelita Gutiérrez decided not to pursue charges of crimes against humanity against former President Fujimori and several staff members of the Ministry of Health. Gutiérrez stated that instances of forced sterilizations of indigenous women were not conclusive evidence that the practice was state policy and were, rather, isolated cases.
Some health providers tell a different story, saying that they  were required by state officials to meet daily quotas. Dr. Hernando Cevallos, a leader of a regional medical doctor’s union, for example, received an order to sterilize 250 women in 4 days in 1997.

Meanwhile, the victims and their allies are appealing the dismissal of the case and hoping to appeal to a higher court, such as the Inter-American Court. Tania Pariona, a newly elected member of the national Congress and indigenous activist, said of Gutiérrez’s decision, “I believe we are facing a situation of shameful impunity in the country.”


Congresswoman Pariona went on to highlight the scale of the reproductive health program (in terms of the number of people sterilized) during this period, pointing out that in many indigenous communities today there is not even a single ob-gyn to perform a safe delivery. More than 15 years after the end of this “reproductive health” program, the Peruvian state continues to fail indigenous women.
Shena Cavallo works with the International Women's Health Coalition. This article has been republished from Democracia Abierta under a Creative Commons licence. It has been slightly abridged.
- See more at: http://www.bioedge.org/bioethics/peru-continues-to-debate-legacy-of-forced-sterilizations/12010#sthash.c7la1iNv.dpuf

One of the recurring themes thrown up by assisted reproduction is the importance of genetic ties. Are we determined by our origins, or can we forge our own identity? Does it matter whether our nearest and dearest are our kith and kin or whether they are just the people we hang around with?
By chance I just stumbled across the astonishing story of a Hungarian politician whose life was transformed when he discovered his true genetic identity.
By the time Csanad Szegedi was 24, he was vice-president of Jobbik, a far-right, nationalist and virulently anti-Semitic party. He was elected to the European Parliament as a Jobbik MEP in 2009 and wrote a book, I Believe in Hungary’s Resurrection.
Then he learned his family’s deepest secret: he was a Jew. His grandfather and grandmother were actually Auschwitz survivors.
Szegedi’s life fell apart. He was forced to resign from Jobbik.
Suddenly he did a complete about-face. Under the tuition of a Lubavitch rabbi from New York who was living in Budapest he became an Orthodox, observant Jew; he had himself circumcised, adopted the name Dovid and burned a thousand copies of his book. Now he ismigrating to Israel with his wife and two children. He is interesting in joining the Knesset.
Szegedi is obviously a complex, intense man. He could even be a charlatan. But his astonishing journey does suggest that there is something to the idea that our personal identity is incomplete if it lacks the genetic heritage.