In reversal, Donald Trump signs executive order to keep families together at border | The Indian Express

In reversal, Donald Trump signs executive order to keep families together at border | The Indian Express

In reversal, Donald Trump signs executive order to keep families together at border

It was a dramatic turnaround for Donald Trump, who has been insisting, wrongly, that his administration had no choice but to separate families apprehended at the border because of federal law and a court decision. 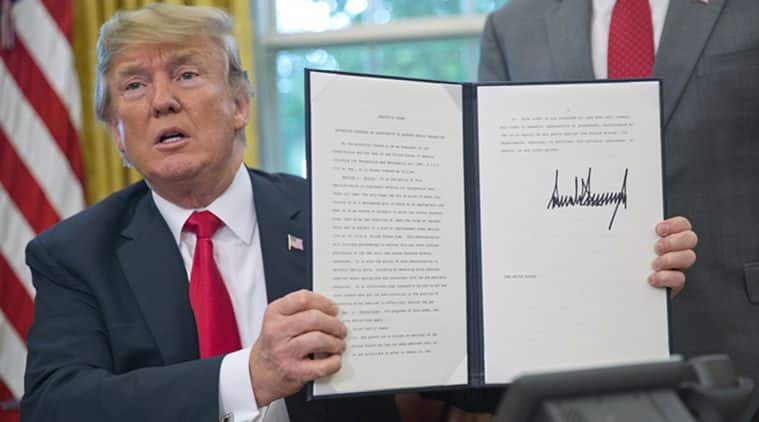 President Donald Trump holds up the executive order he signed to end family separations, during an event in the Oval Office of the White House in Washington, Wednesday, June 20, 2018. (AP Photo/Pablo Martinez Monsivais)

Bowing to pressure from anxious allies, President Donald Trump signed an executive order Wednesday ending the process of separating children from families after they are detained crossing the US border illegally.
It was a dramatic turnaround for Trump, who has been insisting, wrongly, that his administration had no choice but to separate families apprehended at the border because of federal law and a court decision.
48s

Donald Trump hugs American flag after immigration speech
Donald Trump hugged the American flag after an immigration speech in Washington DC. The US President had railed against illegal immigration before his stunt.
The news in recent days has been dominated by searing images of children held in cages at border facilities, as well as audio recordings of young children crying for their parents — images that have sparked fury, question of morality and concern from Republicans about a negative impact on their races in November’s midterm elections.
Until Wednesday, the president, Homeland Security Secretary Kirstjen Nielsen and other officials had repeatedly argued the only way to end the practice was for Congress to pass new legislation, while Democrats said he could do it with his signature alone. That’s what he did on Wednesday. 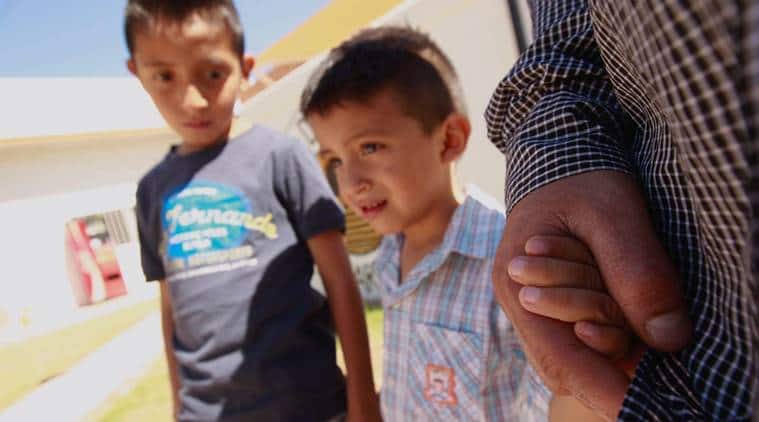 Salvadoran migrant Epigmenio Centeno and his sons, nine-year old Axel Jaret (L) and three-year old Steven Atonay, pose for a photograph outside the shelter House of the Migrant, after Epigmenio decided to stay with his children in Mexico due to US President Donald Trump’s child separation policy, in Ciudad Juarez, Mexico June 19, 2018. (REUTERS)
“We’re going to have strong, very strong borders, but we’re going to keep the families together,” said Trump who said he didn’t like the “sight” or “feeling” of children separated from their parents.
He said his order would not end the “zero-tolerance” policy that criminally prosecutes all adults caught crossing the border illegally. The order aims to keep families together while they are in custody, expedite their cases, and ask the Department of Defense to help house families.
Justice Department lawyers had been working to find a legal workaround for a previous class-action settlement that set policies for the treatment and release of unaccompanied children who are caught at the border. 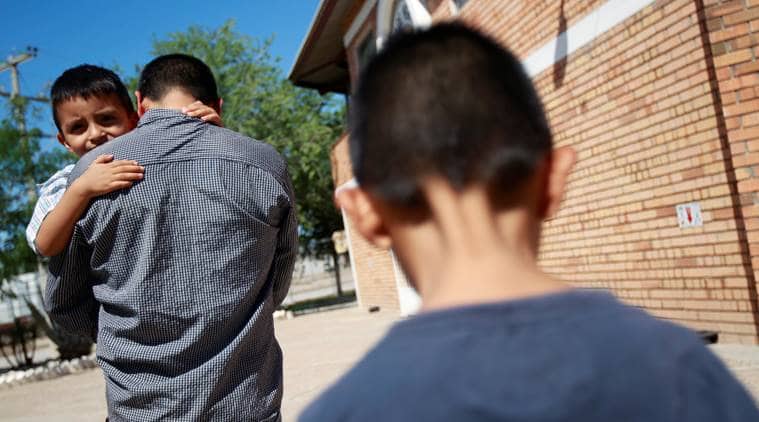 Salvadoran migrant Epigmenio Centeno carries his three-year-old son Steven Atonay, as his nine-year son old Axel Jaret follows, outside the shelter House of the Migrant, after Epigmenio decided to stay with his children in Mexico. (Source:  REUTERS)
Still, Trump’s order is likely to create a new set of problems involving length of detention of families, and may spark a fresh court fight.
Also playing a role in his turnaround: First lady Melania Trump. One White House official said Mrs. Trump had been making her opinion known to the president for some time that she felt he needed to do all he could to help families stay together, whether by working with Congress or acting on his own.
Nielsen traveled to Capitol Hill Wednesday afternoon to brief lawmakers. And members on the fence over pending immigration legislation headed to the White House to meet with Trump.
Trump had tweeted earlier Wednesday, “It’s the Democrats fault, they won’t give us the votes needed to pass good immigration legislation. They want open borders, which breeds horrible crime. Republicans want security. But I am working on something – it never ends!”
The administration recently put into place a “zero tolerance” policy in which all unlawful border crossings are referred for prosecution — a process that moves adults to the custody of the U.S. Marshals Service and sends many children to facilities run by the Department of Health and Human Services. Under the Obama administration, such families were usually referred for civil deportation proceedings, not requiring separation. Republican leaders shout in protest as President Donald Trump meets at the Capitol with House Republicans to discuss a GOP immigration bill Tuesday, June 19, 2018, in Washington. (Source: AP Photo)
The policy had led to a spike in family separations in recent weeks, with more than 2,300 minors were separated from their families at the border from May 5 through June 9, according to the Department of Homeland Security.
Two people close to Homeland Security Secretary Nielsen said early Wednesday that she was the driving force behind the plan to keep families together after they are detained crossing the border illegally.
One of the people said Nielsen, who had become the face of the administration’s policy, had little faith that Congress would act to fix the separation issue and felt compelled to act. Nielsen was heckled at a restaurant Tuesday evening and has faced protesters at her home.
But others pushed back on the idea that Homeland Security had led the rollback. One official said it was the Justice Department that generated the legal strategy that is codified in the working executive order, and disputed the notion that Homeland Security was involved in drawing up the document.
Planning at the Justice Department had been underway over the past several days to provide the president with options on the growing crisis, said the official, who, like others, spoke on condition of anonymity to discuss the effort before its official announcement. 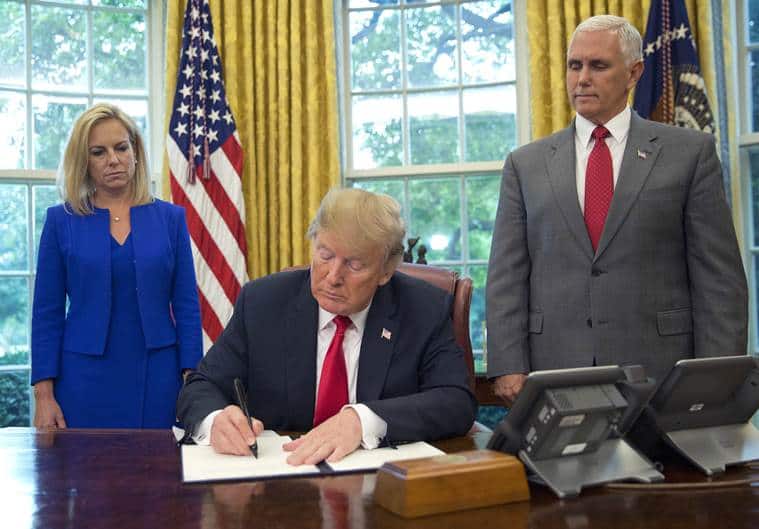 President Donald Trump signs an executive order to keep families together at the border, but says that the ‘zero-tolerance’ prosecution policy will continue. (AP Photo/Pablo Martinez Monsivais)
The person said Trump called the Justice Department Wednesday morning asking for the draft order. The official did not know what prompted Trump to change course.
The Flores settlement, named for a teenage girl who brought the case in the 1980s, requires the government to release children from custody and to their parents, adult relatives or other caretakers, in order of preference. If those options are exhausted, authorities must find the “least restrictive” setting for the child who arrived without parents.
In 2015, a federal judge in Los Angeles expanded the terms of the settlement, ruling that it applies to children who are caught with their parents as well as to those who come to the U.S. alone. Other recent rulings, upheld on appeal, affirm the children’s rights to a bond hearing and require better conditions at the Border Patrol’s short-term holding facilities.
In 2016, the 9th US Circuit Court of Appeals ruled that child migrants who came to the border with parents and were held in custody must be released. The decision did not state parents must be released. Neither, though, did it require parents to be kept in detention, apart from their children.
For all the latest World News, download Indian Express App
Publicado por salud equitativa en 13:38