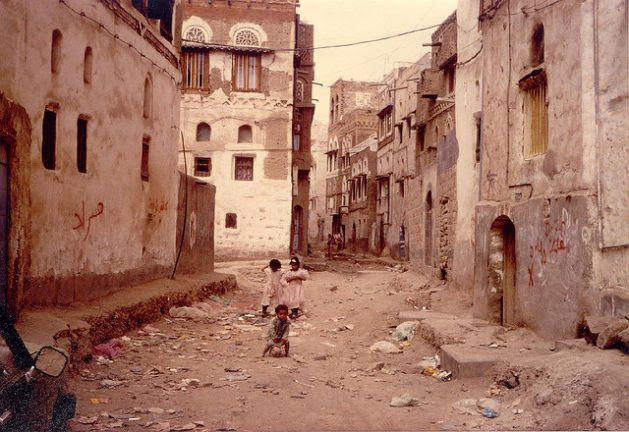 Sana'a backstreet, Yemen. Credit: Ahron de Leeuw
ROME, Jun 28 2018 (IPS) - As Yemen’s people struggle to survive amid what has been described as the world’s worst humanitarian crisis, the stranglehold by both government coalition forces and rebels over the country’s main ports of entry and distribution is cutting off a lifeline of support to 22 million people.

Amnesty International, in a report published on Jun. 22 after seven months of extensive research, said that the Saudi-led government coalition are blocking the entrance of essential humanitarian aid, including food, fuel and medicines. And any distribution of this aid is slowed by Houthi rebels within the country.
“The core aspect highlighted by the report is that humanitarian aid finds it extremely difficult to reach destinations inside the country,” Riccardo Noury, communications director and spokesperson for Amnesty International in Italy, told IPS.
Aid workers described to Amnesty International the extent of delays, with one saying that it took up to two months to move supplies out of Sana’a, the country’s capital.
“The most difficult part was getting the aid out of the warehouse once it is in Yemen,” the aid worker was quoted as saying.
World’s worst humanitarian crisis
Yemen’s war began after Houthi rebels took control of the country’s capital at the end of 2014, forcing the government to flee. In support of the government a coalition of states, led by Saudi Arabia, launched an offensive against the rebels. At least 10,000 Yemenis have been killed in almost three years of fighting, with the overall injured numbering 40,000.
The conflict has pushed Yemen, which was already known as the Middle East’s poorest country before 2014, to the verge of a total human, economic and social collapse.
Save the Children, an international non-governmental organisation that promotes human rights, estimates that 130 children in Yemen die every day from extreme hunger and disease.
It is estimated that three quarters of Yemen’s 27 million people are in need of assistance.
A third require immediate relief to survive and more than half are food insecure – with almost 2 million children and one million pregnant or lactating women being acutely malnourished, the Amnesty International report said. About 8.4 million people face severe insecurity and are at risk of starvation, the report noted quoting figures from the World Food Programme and the United Nations Office of Humanitarian Affairs (UNOCHA).

Overly bureaucratic procedures and long waits for clearance
Amnesty International examined the role of the two major parties in the conflict. On the one hand there is a blockade imposed by the Saudi-led coalition on the country’s air, road and harbour ports, while and on the other hand the slow bureaucracy and corruption of Houthi rebels compromises the flow of aid within Yemen.
Last November, the Saudi-led coalition blocked all Yemen’s ports after rebels fired missiles on neighbouring Saudi Arabia. The ports where opened weeks later but only to allow humanitarian aid into the country.
“However, humanitarian aid alone is not sufficient to meet the needs of the Yemeni population, who also rely on commercial imports of essential goods such as fuel, food and medical supplies,” the Amnesty International report said. It noted the restriction on commercial imports “impacted Yemenis’ access to food and exacerbated existing food insecurity.”
Whereas prior to the blockade more than 96 percent of the country’s food requirements were being met, as of April, “food imports were half (51 percent) of the monthly national requirement.”
Exacerbating the matter is the fact that this year Yemen only received 53 percent of required aid funding. According to the Financial Tracking Service database, which tracks humanitarian aid flows in areas of crisis, in 2018 Yemen received only USD1.6 billion against a request of USD2.9 billion. According to UNOCHA, Saudi Arabia has donated over half a billion dollars towards this aid.
While humanitarian aid is allowed into the country, the government coalition forces are accused of forcing aid vessels to wait for coalition clearance before being allowed to proceed to anchorage. This leads “to excessive delays and unpredictability that have served to obstruct the delivery of essential goods and humanitarian aid.”
However, even when aid eventually enters Yemen, its distribution is hindered by rebel forces.
Houthi rebels have to approve authorisation of movement of aid in the country. It is meant to take, at the most, two days. But sometimes it can take up to five days because of a shortage of officials.
“However, [aid workers] complained that overly bureaucratic procedures have caused excessive delays. They gave the example of the fact that permits provided to humanitarian organisations confine authorisation for movement to the specific day, time, and geographic location that was mentioned in the application.”
The consequence is that if aid workers “are not able for some reason to proceed to the operation on that day [they] have to put a request for a new permit and wait again,” the report said.
Houthi forces have been accused of extortion and interference in the distribution of aid and of “using their influence to control the delivery of aid, to influence who receives aid, and in which areas, and which organisations deliver it.”
One aid official told Amnesty International that they were “often told by Houthi forces to hand over the aid and that they [Houthi forces] would distribute it.”
The delays by both sides is against international humanitarian law, said Noury.
“All warring parties must facilitate the rapid distribution of impartial humanitarian assistance to all civilians in need. They also must ensure freedom of movement for all humanitarian personnel,” he added.
Human rights in Yemen
Noury expressed deep concern for the human rights situation in the country.
“First of all, you have all this situation linked to violations of international humanitarian law, that deals with the conflict itself. This is a very dirty conflict, in which warring parties have used arms that are forbidden by international law, such as cluster bombs. Then, you have the countless attacks against civilians that were committed by the Saudi-led coalition, and then, obviously the issue of humanitarian aid flows,” he said.
Noury stated his concern over the freedom of expression in Yemen as activists from local NGO, Mwatana for Human Rights, are being arrested by both Houthi rebels or Saudi forces as they attempt to impartially report on crimes perpetrated by both warring parties.
Amnesty International have called for the U.N. to “impose targeted sanctions against those responsible for obstructing humanitarian assistance and for committing other violations of international humanitarian law.”
It’s called on the government coalition forces and rebel forces to end delays and allow prompt delivery of aid and the allowance of commercial flights into the country.