A government official told reporters bilateral talks on managing so-called secondary migration had been "encouraging" ahead of Thursday's EU government leaders' summit, which may help defuse the crisis over migration dividing her coalition. 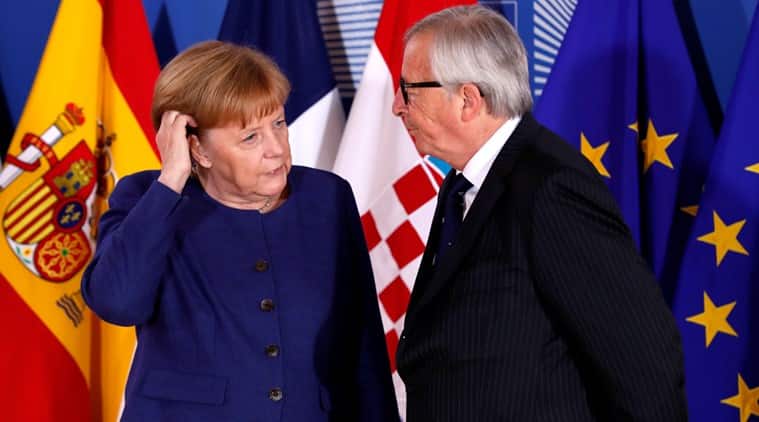 German Chancellor Angela Merkel is welcomed by European Commission President Jean-Claude Juncker at the start of an emergency EU leaders summit on immigration in Brussels, Belgium June 24, 2018. (Source: REUTERS/File)
German officials hope to win support from other European Union states for deals on managing the further travel of refugees already on the bloc’s territory – arrangements that could throw a lifeline to embattled Chancellor Angela Merkel. A government official told reporters bilateral talks on managing so-called secondary migration had been “encouraging” ahead of Thursday’s EU government leaders’ summit, which may help defuse the crisis over migration dividing her coalition.
The dispute is over plans drawn up by Merkel’s interior minister Horst Seehofer, the head of Bavaria’s conservative Christian Social Union (CSU), to send back migrants who reach the German border after having registered in other EU states.
50s

Irish border agreement has to be part of Brexit deal, Juncker warns
On a visit to Dublin, the European Commission president Jean-Claude Juncker has warned the UK there will be no Brexit deal without agreement on the Irish border.
Merkel’s coalition partners described the situation as very serious after four hours of crisis talks on Tuesday night failed to resolve a dispute that threatens to tear apart her three-month old government.
But Thomas Strobl, deputy leader of her Christian Democrats (CDU) told the Funke newspaper group late Wednesday that the Bavarian party had softened its tone. To break up the 70-year old conservative alliance over an issue on which they were in such close agreement, would be “absurd,” he said.
German President Frank-Walter Steinmeier told diplomats in the northern German city of Bremen that he was optimistic a solution could be found. “We must succeed if the future of Europe means anything to us,” he said.
Sending back migrants is anathema to the usually flexible Merkel as it would undermine her open-door migrant policy and be a major setback to the EU’s Schengen open border system. The CSU has given Merkel until the end of this week’s EU summit to agree on policies with EU partners to reduce the burden on Germany.
Volker Kauder, a senior lawmaker in Merkel’s CDU, told German television the argument had not been resolved at Tuesday’s talks, which went past midnight at the chancellery, and stressed that the situation was grave.
“It is very serious – we saw that in the talks, this is not about something small, it is about something central and important. We need to talk to each other,” said Kauder.
The CSU is pressuring Merkel to get a European deal, or at least bilateral deals with countries like Greece and Italy, saying nothing was to be gained by delaying action.
The party’s bid to curb migrant arrivals appears timed to prevent a surge of the far-right, anti-immigrant Alternative for Germany (AfD) party in Bavaria’s state election in October, but recent polls show the dispute has weakened support for the CSU, which has dominated the wealthy west German state for decades.
The CSU itself is divided, with some senior officials worried that brinkmanship risks bringing down the government, while others see the direst warnings as a negotiating tactic. “It’s about scaring the other side,” said one top official.
The Bavarian conservatives will meet on Sunday to review any EU progress and decide whether to defy Merkel and introduce the new controls. A Civey poll showed 52 percent of conservative voters wanted the CSU to give Merkel more time to reach a deal.
If Seehofer goes ahead with his plans, many members of Merkel’s CDU say she would be forced to fire him. That could lead to a breakup of the alliance between the CDU and CSU and rob Merkel of a parliamentary majority.
The main options then look like a Merkel-led minority government or a new election. It is also possible that Merkel, chancellor for nearly 13 years, may lose support in her own CDU.
Andrea Nahles, head of the Social Democrats (SPD), junior partners in Merkel’s ruling coalition, said the current standstill was unsatisfactory and it was unclear what would happen. Asked if she was preparing for a new election, she said: “I don’t know. To be honest with you, we are waiting to see.”
Merkel’s open-door migrant policy, which has led to the arrival of more than 1.6 million migrants in Germany since the start of 2015, is blamed for the rise of the AfD, now the country’s main opposition party.
For all the latest World News, download Indian Express App
Publicado por salud equitativa en 9:04