The protests came as demonstrations occurred around the country over the Trump administration’s policy of separating immigrant families. They offered a glimpse of what might happen on Saturday when rallies are planned coast to coast. 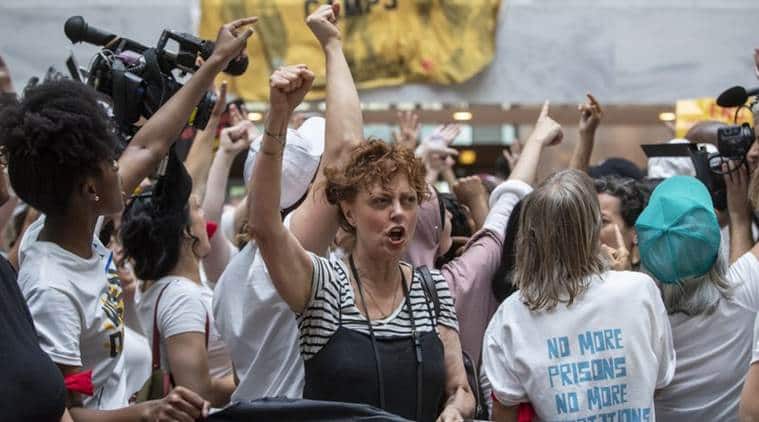 Hundreds of activists, including actress Susan Sarandon, center, protest the Trump administration’s approach to illegal border crossings and separation of children from immigrant parents, in the Hart Senate Office Building on Capitol Hill in Washington, Thursday, June 28, 2018. (AP Photo/J. Scott Applewhite
Capitol Police arrested nearly 600 people Thursday after hundreds of loudly chanting women demonstrated inside a Senate office building against President Donald Trump’s treatment of migrant families. Among them were a Washington state congresswoman, the lawmaker said on Twitter.
The protests came as demonstrations occurred around the country over the Trump administration’s policy of separating immigrant families. They offered a glimpse of what might happen on Saturday when rallies are planned coast to coast.
This is a modal window.

Deported after Trump order, Central Americans grieve for lost children
"Who knows when I'll be able to see my daughter again?" Two anxious Central American parents describe to Reuters the anguish of being separated from their children.
Amid unrelenting daily images of distraught immigrant children separated from parents and herded into fenced enclosures, women sat on the floor of the Senate Hart Office building’s 90-foot-high atrium. Seated around Alexander Calder’s black metallic “Mountain and Clouds” sculpture, they shouted slogans and cheered for a handful of fist-pumping lawmakers — all Democrats — who waded into the crowd.
READ | Donald Trump favours people coming to US through merit-based system
“What do we want? Free families!” and “This is what democracy looks like” were among their cries.
Many wore foil blankets similar to those given to migrants housed at US detention facilities. Hundreds of activists protest the Trump administration’s approach to illegal border crossings and separation of children from immigrant parents, in the Hart Senate Office Building on Capitol Hill in Washington, Thursday, June 28, 2018. (AP Photo/J. Scott Applewhite)
The sit-in of protesting women was organized by two liberal groups, Women’s March and the Center for Popular Democracy. The action lasted more than two hours.
In a written statement, the Capitol Police said around 575 people were charged with unlawfully demonstrating inside the office building. The police said those arrested were being released after they were processed.
ALSO READ | Fighting Trump’s ‘Zero Tolerance’, this lipstick brand is giving 100 per cent proceeds to families separated at US border
Winnie Wong, political adviser for the Women’s March, said the crowd’s fervor will translate into “the energy we will need to see to at the ballot box in November,” when congressional control will be at stake.
Rep. Pramila Jayapal, D-Wash., said she was arrested during the protest. Jayapal, who was born in India, tweeted a video of herself in which she said she was proud to be arrested to protest Trump’s zero-tolerance policy.
“We’re here to fight for our families to be free, to fight for the ability of our kids to be with their parents — not in cages, not in prison, but able to live their lives free, safe and secure,” Jayapal said. Protesters hold up their hands as they fill the center atrium and upper levels lining the Hart Senate Office Building in protest of the separation of immigrant families, Thursday, June 28, 2018, on Capitol Hill in Washington. (AP Photo/Jacquelyn Martin)
Democratic Sens. Jeff Merkley of Oregon, Kirsten Gillibrand of New York and Edward Markey of Massachusetts also appeared before the crowd. “These folks are out here fighting for the core principles of our nation, and I applaud them for it,” Merkley said in an interview.
Under Trump’s “zero tolerance” policy, the government has begun prosecuting all migrants caught entering the country without authorization. Trump has halted his policy of taking children from their detained parents under public pressure but around 2,000 of them are still being held, with many families saying they’ve not known how to locate them.
The sit-in came two days after another show of liberal political energy in which 28-year-old political neophyte Alexandria Ocasio-Cortez ousted 10-term Rep. Joe Crowley in a Democratic primary for his House seat in New York.
Hundreds of people gathered at a rally outside a federal courthouse in Brownsville, Texas, near the US-Mexico border in the Rio Grande Valley.
Dozens of people shut down a government meeting in Michigan in protest of a contract with Immigration and Customs Enforcement to house detainees at a local jail. And eight people were arrested outside an ICE building in Portland, Oregon, that has been closed because of a round-the-clock demonstration.
For all the latest World News, download Indian Express App
Publicado por salud equitativa en 5:39