The Goodlatte Bill also known as the Conservative Bill, coined after Republican Congressman Bob Goodlatte from Virginia who introduced the bill, met defeat by a large margin of 121 "yes" votes to 301 "no" votes in the House. 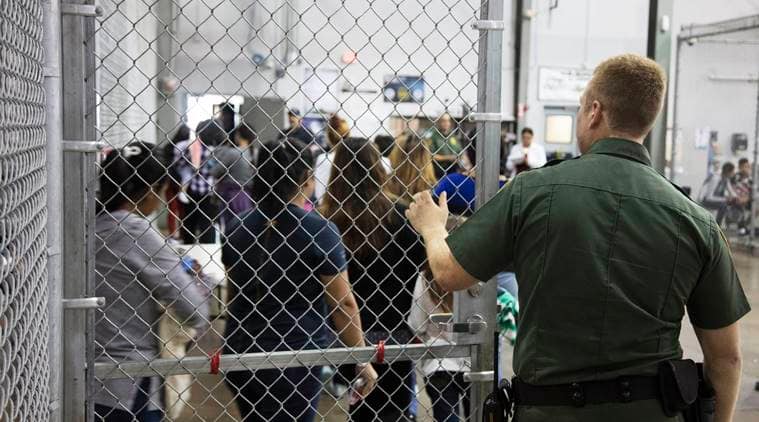 In this photo provided by U.S. Customs and Border Protection, a U.S. Border Patrol agent watches as people who’ve been taken into custody related to cases of illegal entry into the United States, stand in line at a facility in McAllen, Texas, Sunday, June 17, 2018. (U.S. Customs and Border Protection’s Rio Grande Valley Sector via AP)
US President Donald Trump received a blow on Thursday when the US House of Representatives failed to pass another immigration bill which had narrowed the legalisation for some unauthorised immigrants and eliminated the application for a green card.
The Goodlatte Bill also known as the Conservative Bill, coined after Republican Congressman Bob Goodlatte from Virginia who introduced the bill, met defeat by a large margin of 121 “yes” votes to 301 “no” votes in the House as compared to the first bill.
1m 27s

Democrat Crowley ousted by political novice in US shocker
Veteran US Congressman Joe Crowley is ousted by a 28-year-old far-left political novice, Alexandria Ocasio-Cortez, in a shocking defeat.
“Once again, Republican leaders put a partisan immigration bill on the floor, and it failed overwhelmingly,” House Democratic Whip Steny H Hoyer said.
What is the Goodlatte Bill?
Narrow legalisation, no access to green cards or citizenship for DACA recipients:
The bill laid down that some unauthorised immigrants who had entered US as children, would be provided with temporary legal status which can be renewed every three years. Such immigrants would further not be allowed to apply for a green card. In other words, they would not have an access to apply for citizenship.
Their legal status would be challenged if their income dips below 125 per cent of the poverty line for a long duration.
Illegal stay after expiration of visa:
Immigrants entering US on a temporary visa would not be welcome to stay once the visa expires. The bill had criminalised the process and suggested deportation of 40 to 50 per cent of unauthorised immigrants who entered via a visa.
Cuts to family-based immigration:
The bill also planned to cut down the gross legal immigration by 25 per cent, 260,000 lesser legal immigrants a year. The process to cut down on legal immigration would have been done by eliminating the diversity visa lottery and most categories of family-based immigration, including parents and unmarried adult children of US citizens.
For all the latest World News, download Indian Express App
© IE Online Media Services Pvt Ltd
Publicado por salud equitativa en 9:09