The civil disobedience was a reaction to the Trump administration's crackdown at the US-Mexico border, including separation of thousands of children from their parents in recent months. 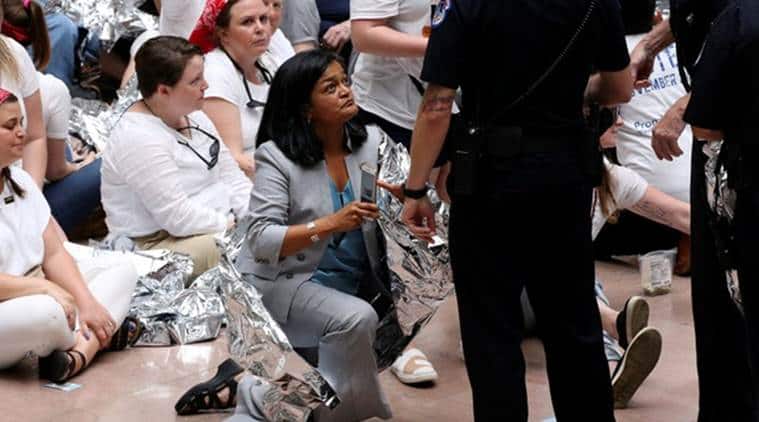 U.S. Capitol Police direct U.S. Representative Pramila Jayapal (D-WA) to stand for arrest as she joined demonstrators calling for “an end to family detention” at the Hart Senate Office Building on Capitol Hill in Washington (Source: Reuters)
Indian-American Congresswoman Pramila Jayapal was arrested along with 575 other women during a protest staged in Washington against US President Donald Trump’s border and immigration policy.
Jayapal said she was asked to speak at the demonstration called by women at the Hart Senate Office Building on Thursday, reports The Seattle Times.
This is a modal window.

Trump meets Republicans for border crisis fix
U.S. President Donald Trump tells Republican lawmakers he'll back either of the immigration bills making their way through the House of Representatives, as the outcry grows over his administration’s separation of immigrant parents and children at the U.S.-Mexico border.
The civil disobedience was a reaction to the Trump administration’s crackdown at the US-Mexico border, including separation of thousands of children from their parents in recent months.
“I decided that I, too, would sit down with them and submit to arrest,” Jayapal said.
“We chanted and sang and talked about the need to reunite these families and to end the President’s zero-tolerance policy.”
The women were arrested and charged with unlawfully demonstrating in the Senate office atrium, said Eva Malecki, a spokeswoman for the U.S. Capitol Police. Jayapal was issued a $50 fine for “crowding, obstructing, or incommoding”. It was her third arrest at a protest, the other two occurring years before her 2016 election to Congress.
A longtime immigration-rights leader who founded OneAmerica before running for elected office, Jayapal said she has been outraged and unable to sleep over Trump’s “zero tolerance” prosecutions of people crossing the US-Mexico border, The Seattle Times reported.
“I think that every American, Republican and Democrat, just has to try and imagine what that looks like, to have a six-month-old baby taken from your breast,” she said.
Jayapal has also helped organise “Families Belong Together” protests set for Saturday, with demonstrations in Washington, D.C., and other cities across the nation. The Trump Administration launched the so-called “zero tolerance” policy in April, which considers illegal border crossing as a criminal offence, meaning that immigrant minors will be separated from their families, reports Efe news.
Last week, Trump penned an executive order to end family separations at the border due to harsh criticism.
Since then, the US government has reunited 538 children with their relatives, but more than 2,000 minors still remain separated, according to data from the Department of Homeland Security.
For all the latest World News, download Indian Express App
Publicado por salud equitativa en 5:41