Breaking the Cycle of Child Labor in Peru 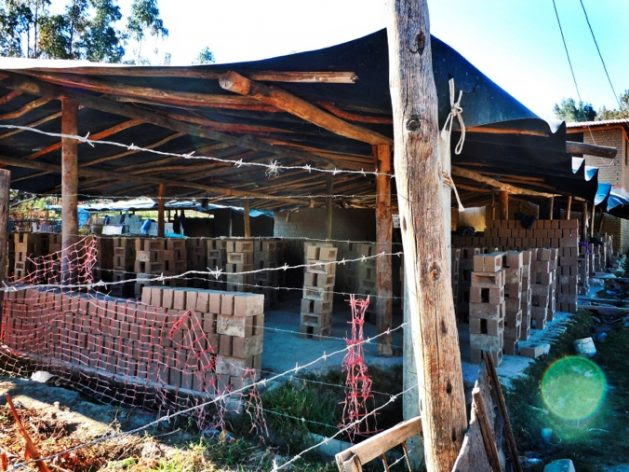 The brick site where children toil away, just down the road from the classroom. Credit: Andrea Vale/IPS
LIMA, Jun 28 2018 (IPS) - Most laborers in Peru are forced into a vicious cycle by circumstance. Faced with low-paying, high-intensity work, they have no choice but to make their children work as well. Having spent their lives neglecting education for labor, those children in turn grow up with no options for income besides low-paying, high-intensity positions  – and so on. But in classrooms across one region, a handful of teachers are trying to break that cycle while the children are still young.
Passing out books every week in a tiny classroom that lies on the side of a dirt road, high up in the Andes overlooking the city of Cajamarca, volunteers are met with a crime that teachers would usually welcome – the children are trying to sneak out extra books so that they can read more.
When they first begin coming to classes, virtually all of the children have self-esteem so low that they are cripplingly shy and can barely speak to others.

Once each has a book the air is filled with high voices while they excitedly compare with one another, sometimes swapping between friends, exclaiming in thrill.
Each one of them is a child laborer.
The overwhelming majority work in brick yards, although some in nearby towns work loading and unloading carts of fruit from trucks in the crowded mercado; as construction workers helping to build houses by carrying cement and heavy tools; farm hands; maids; or simply wandering the streets for hours picking up bottles for recycling departments.
The miniature brick workers – all aged around six years old – rise at six in the morning and walk for several hours to get to their work sites. They spend all day in the mud, molding dirt into bricks; carrying loads into large, industrial ovens; hauling piles of finished bricks into trucks; and unloading the same loads in construction sites and crowded mercados.
It’s a job that consumes a child’s daily life, taking up any time that he or she is not in school.  The work gradually eats in to school hours themselves more and more until the children eventually drop out completely around age 12, to allow themselves to spend more time working and earn a larger income. Unsurprisingly, almost all of them are constantly ill and malnourished.
The first week spent in the classroom, one volunteer picked up an unsuspecting-looking crossword puzzle and examined it off-handedly. What she found was a startling unintentional statement on the reality of child labor, a first-grader’s scrawl answering as casual vocab terms the names of laws and legal rights that ensured that his right to protect his body, and for adults to care for him and other children.
That disquieting intermingling of childish innocence alongside more menacing undertones characterized the classroom. Posters on the wall displayed ‘My Rights Are: A Family;” “My Rights Are: An Education;” and “My Rights Are: A Home,” with the same bright colors and cartoons that exhibited the ABCs in elementary school classrooms.

A child laborer’s crossword puzzle. Credit: Andrea Vale/IPS
Antonieta, the teacher, smiled over them all from her place at the front of the classroom. She augmented to the atmosphere of cheeriness, taking time to sit with the children at their tables to ask them, “What story are you writing in your journal?”; “What do you think the moral of the book you’re reading is?”
When interviewed sitting on a log by the outhouse behind the classroom without any children around, however, her demeanor is notably more sober.
“Going to school is the most expensive right in Peru,” Antonieta said in Spanish, “According to the laws, they say, ‘No, school doesn’t cost anything,’ but in reality, they ask for money for everything.”
Antonieta told me that child laborers come from illiterate parents, ones without stable jobs. At best, mothers find occasional work as housekeepers, clothes washers and nannies, earning a salary of 100 soles a month (30 dollars), 200 if they’re lucky. Fathers are blue-collar workers, resigned by their lack of education to low salaries and career instability.
To earn an income even close to what it takes to keep a family surviving, everyone has to work – including the smallest members. An average income for a family in which mothers, fathers and children all contribute is about 400 to 600 soles a month – the equivalent of about 120 to 180 U.S. dollars.
And what does 400 to 600 soles a month look like? A house comprised of one room, at most two. Mothers, fathers, children, aunts and uncles, and grandparents all live together in their simultaneous bedroom, dining room and kitchen. And housed inside with them are farm animals and pets. As a result, these children grow up without independence, constantly stricken with stomach infections, colds and other detrimental diseases. The Cajamarca region holds the second-most place in Peru for youth malnourishment.
According to the International Labor Organization, there are 3.3 million child laborers in Peru, and a third of them are under 12 years old. 26.5% – almost 1/3 – of the Peruvian population between the ages of six and 17 are currently working, and those numbers are projected to increase greatly over the next few years. Though most of the younger half of child laborers attempts to attend school alongside their labor, children seem to drop out of school completely around age 12. For instance, among children who labor as domestic workers, only 2.3% of those aged 6-11 don’t attend school at all – as compared to 97.7% of those aged 12-17.
One brick site sits just down the road from the classroom. Unshielded from the sharp Peruvian sun beating down is a field of meticulously organized piles of industrial-sized bricks, intercepted in places by mounds of dirt and one massive brick oven. It isn’t hard to picture the ghosts of activity that had filled it only hours before – little hands straightening those piles of bricks; tiny bodies stumbling inside that oven carrying loads of mud stacked higher than their heads.
“Last week we gave dolls to the children,” Antonieta said. “They identify certain parts of the body where emotion is connected, where they feel happy or sad. Many of them couldn’t.”
When they first begin coming to classes, virtually all of the children have self-esteem so low that they are cripplingly shy and can barely speak to others. They are totally unable and fearful of expressing their thoughts and feelings.
“The children don’t have places for recreation. They don’t have places to be together with their friends, they don’t have places to do homework, they don’t have places to have conversations with their parents,” Antonieta said, “After coming to a few classes, they are more expressive. They are able to communicate their feelings, they communicate more with their families. They are improving in their studies. We have them write in journals. There was a little boy who brought his in and had written, ‘If (class) didn’t exist anymore, my dreams would be broken. My dreams would be dead.’ “
Antonieta began to quietly weep.
“A lot of children have written very good things, beautiful things,” she persisted, “‘There is so much hope with these children, that they’ll be able to learn and grow, and they come here and they get that hope.”
She says that reading “will help tremendously with their knowledge, increase their abilities, and they will not be taken advantage of so easily. They will be able to defend their own rights.”
Antonieta says that of the 250 children enrolled this year, 200 have left work, and the rest have reduced their hours at work.
“There is still a lot of work to do,” Antonieta says. “We’ve made progress, but there’s still a lot of work to do.”