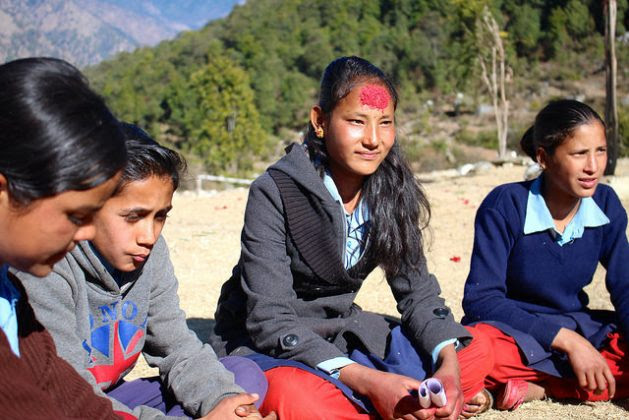 Rashmi Hamal is a local heroine who helped to save her friend from an early marriage. She campaigns actively against child marriages in the Far Western Region of Nepal. Credit: Naresh Newar/IPS
UNITED NATIONS, Jun 22 2018 (IPS) - Something historic was initiated at the European Development Days (EDD) in early June: the EDD placed women and girls at the forefront of Sustainable Development. Since its inception in 2006, EDD has become a barometer for ideas in global development.
Ever since then, the EDDs have developed into the Davos of Development and shapes how the European Union constructs its development policies. In 2018, the EU development agenda was transformed and shaped by a gender equality agenda.
This year’s speakers included the Norwegian Prime Minister, the director-general of the World Health Organization, the Crown Princess of Denmark, and Head of UN Women and Under Secretary General Phumzile Mlambo-Ngcuka.
Along with H.R.H Princess Mabel of Oranje-Nassau of Netherlands, the chair of Girls not Brides; Aichatou Boulama Kane, the Minister of Planning of the Republic of Niger; and Linda McAvan,Labour MEP for Yorkshire & The Humber, Chair of European Parliament Committee on Development, I served on the panel on child marriage to examine closely the Draft Resolution “Toward an EU external strategy against early and forced marriage” introduced before the European parliament by Member of the EU Parliament, Charles Goerens who moderated the panel at EDD on June 6.
The Resolution was unique in the way in which it called on European Union, in the context of its foreign policy and its development cooperation policy, to offer a strategic pact to its partners and to that end require that all its partner countries prohibit early and forced marriage in law and practice.
The Resolution points out that in order to comprehensively tackle early and forced marriage, the European Union, as a major actor in global development, must play a leading role.
The Resolution was drafted at an important political moment and captured the extraordinary global shifts and crises as a stated goal: “…whereas during the recent migrant crises, many parents, seeking to protect their daughters from sexual aggression, chose to have them marry before the age of 18.”
The Resolution also took into consideration of girls all over the world, including Yazidi girls and Chibok girls who are forced into marriage: “…calls for the act of forcing a child to enter into a marriage and that of luring a child abroad with the purpose of forcing her or him to enter into a marriage to be criminalized.”
The bedrock of the Resolution is that it calls upon all Member States to include a ban on early and forced marriage in their legislation. In a remarkable use of development cooperation, the Resolution sets out that: “The level of public development aid is made dependent on the recipient country’s commitment to complying with the requirements in the fight against early and forced marriage.”
My recommendation addressed the fact that around the world, even when the law is changed, the loopholes in the law remain. For example, I cited the recent Bangladesh Child Marriage Restraint Act of 2017 signed into law by Prime Minister Sheikh Hasina last year. The law significantly increased the punishment for contracting or conducting child marriage.
However, it includes a provision in Section 2(10) of the law that undermines the spirit of the law reform: “Within the definition of the law will not be considered an offense if the marriage takes place in special circumstances in the best interest of the underage woman in question.”
Co-opting the primacy of the best interest of the child principle as set out in the Convention of the Rights of the Child helps the government to legitimize child marriage in a way that the principle was never envisioned.
General Comment 14 issued by the Committee of the Rights of the Child recognizes that the best interest standard is vulnerable to manipulation of governments and obliges states parties to ensure the full rights recognized by the Convention.
“The best interest of the standard is rendered meaningless if not seen in the context of all the rights in the Convention. The right to education, access to health care services and protection from physical, and mental violence are in no way promoted and are in fact impeded by child marriage. ”
The EU has a critical role to play in influencing policy reform both in the EU member states and outside. The EU and many of its member states contribute significant amounts of development cooperation to countries with high rates of child marriage. However, it is important for the EU to acknowledge that law reform itself can be complicit in undermining the prevention of child or forced marriage.
Development cooperation must be aimed not only at addressing legislative reform but also on closing the loopholes in the law that render law reform meaningless. This calls for aligning development cooperation not only with changes in law and practice but with the transformation of political will.