Increased Rainfall in Tropics Caused by More Frequent Big Storms
A new study based in part on NASA satellite data has shown that an increase in large, well-organized thunderstorms is behind increased rainfall in the wettest regions of the tropics.
Many scientists have long thought that in a warming world some regions are likely to see more rain because a warmer atmosphere is capable of holding more water vapor. The idea seemed to be supported by recent observations showing strong precipitation increases in the wettest tropical regions, sometimes referred to as a 'rich-get-richer' pattern. 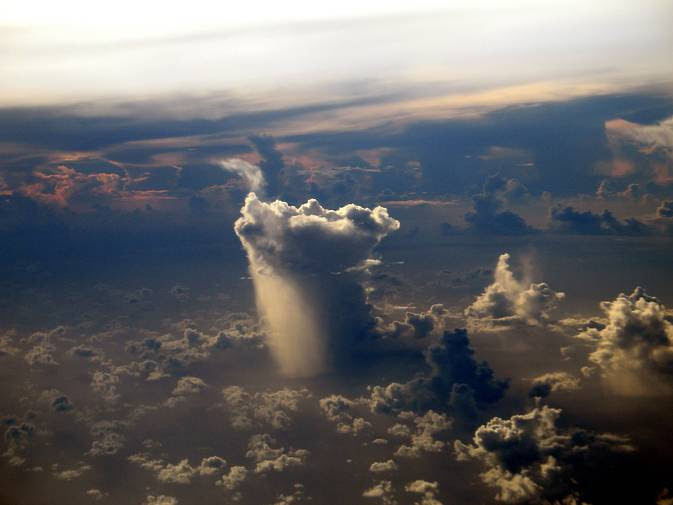 A new study found that the wettest regions in the tropics are seeing rainfall increases due to large thunderstorms organizing in the atmosphere on a more regular basis.
Image Credit:
Flickr user barto
View original image
Joint research from the Australian Research Council Centre of Excellence for Climate System Science (ARCCSS) and NASA published online in Nature today reveals that rainfall increases seen in places such as the western Pacific in recent decades are actually due to large storms – what the authors call “organized deep convection” – happening more frequently, rather than from individual storms producing more rain.

"The observations showed the increase in rainfall is directly caused by the change in the character of rain events in the tropics rather than a change in the total number of rain events," said lead author Jackson Tan, who conducted this research while at Australia’s Monash University but now works at NASA’s Wallops Flight Facility, Wallops Island, Virginia. "What we are seeing is more big and organized storms and fewer small and disorganized rain events." 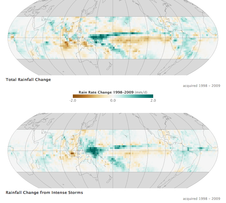 The top image shows the rate of overall tropical rainfall changes, from 1998-2009, based on the Tropical Rainfall Measuring Mission, while the bottom image shows overall rainfall rate changes, for the same time period, that are due to organized deep convection.
Image Credit:
NASA Earth Obervatory/Jesse Allen
The study helps chip away at one of the big questions facing climate change science: To what degree will a warmer world accelerate the water cycle and patterns of rainfall and drought? In particular, this study revolves around what scientists call organized deep convection – in short, large thunderstorms. These storms make up about five percent of the weather systems in the tropics but are responsible for about 50 percent of tropical rainfall.

While this study does not delve into what’s causing the increase in large storms, it does reveal a tight correlation between this trend and increasing rainfall.
Analyzing rainfall and cloud data from 1983 to 2009, Tan found that these large storms are still producing similar or even less amounts of rain on average, but they are happening more often.
Tan began his research wanting to follow up on previous studies that showed some regions of the tropics have experienced increased rainfall in recent decades. Climate models predicted this would occur in a warming world.
“We are looking at what’s driving the changes in rainfall, and we are putting another piece of the puzzle out there,” Tan said. “Frequency of organized deep convection is definitely a part of this.”
Co-author George Tselioudis, a researcher at the NASA Goddard Institute for Space Studies in New York, authored a paper in 2010 that defined trends in organized deep convection in the tropics and sparked Tan’s curiosity on what was driving those trends.
“This work changes our perception of why tropical precipitation is increasing,” Tselioudis said. “We thought it was because the warmer atmosphere holds more moisture and, therefore, when storms occur they rain more. But that doesn’t seem to be the case. Instead, the warmer tropical atmosphere becomes better organized to produce large storms  more frequently.”
The researchers analyzed rainfall data from NASA’s Tropical Rainfall Measuring Mission (from 1998-2009) and from the Global Precipitation Climatology Project (from 1983-2009). These rainfall data were compared to cloud data from the International Satellite Cloud Climatology Project for the period from 1983 to 2009.
While climate models have long predicted that a warmer world would see an acceleration of the water cycle and changes in rainfall patterns, models have not as of yet produced this change in the frequency of organized deep convection.
The new finding also raises an intriguing next question: Why are these weather systems organizing in the atmosphere more frequently? That’s not yet known, Tan and Tselioudis said.
However, the finding does point the way to a new line of research on the topic, Tselioudis said. Scientists have been focusing on the transfer of heat and moisture in the atmosphere – the thermodynamics of the system. Tselioudis said this finding should direct attention to the dynamics of the atmosphere – the fundamental physics of circulation.
“For me, it’s high time we push in this direction,” Tselioudis said. “We’ve been looking at the water cycle as if it’s mostly a thermodynamic issue. Just being wet doesn’t rain make. There has to be more emphasis on the dynamics. If you look at the grand challenges of figuring out the water cycle – this is where the emphasis is moving to.”
Leslie McCarthy
Goddard Institute for Space Studies, New York
212-678-5507
leslie.m.mccarthy@nasa.gov
Publicado por salud equitativa en 4:00