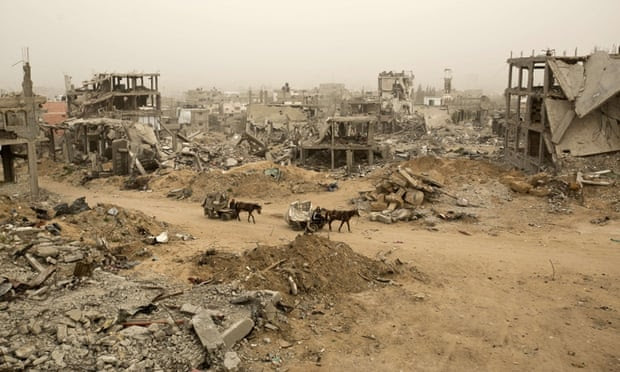 
Six months after the ceasefire, Gaza’s residents are still eking out a perilous existence in the shadow of ruined buildings. Traumatised children struggle with the horrors they have seen and teenagers lose hope in the future, said aid agencies, who criticised international donors for reneging on pledges to help.
In a joint statement, 30 aid agencies, including UN bodies and international NGOs, said they were alarmed by the limited progress that had been made to rebuild devastated lives and tackle the root causes of the conflict.

Gaza aid worker: we have stopped feeling anything – in pictures

Read more
In a separate statement, Oxfam said it would take more than 100 years to reconstruct ruined homes at the present rate of progress.
“We must not fail in Gaza,” said the agency collective. “We must realise the vision of making Gaza a liveable place and a cornerstone of peace and security for all in the region.”
The statement pointed to a dramatic deterioration in the situation since July, pointing out that about 100,000 people remain displaced from their shattered homes.
The agencies said: “Scheduled power cuts persist for up to 18 hours a day. The continued non-payment of the salaries of public sector employees and the lack of progress in the national unity government further increases tensions. With severe restrictions on movement, most of the 1.8 million residents are trapped in the coastal enclave, with no hope for the future.”
Calling on Israel to lift a blockade that has been in place for more than seven years, the statement said the fragile ceasefire must be reinforced and urged all parties to resume negotiations. It also made an urgent call for Egypt to open the Rafah border crossing for humanitarian cases.

Oxfam said it could take more than a century to complete essential rebuilding of homes, schools and health facilities in Gaza, because the blockade was hampering the arrival of basic building materials.
“Only an end to the blockade … will ensure that people can rebuild their lives,” said Catherine Essoyan, Oxfam’s regional director. “It is utterly deplorable that the international community is once again failing the people of Gaza when they need [assistance] most.”
Over a period of seven weeks, from early July last year, Israel bombed thousands of apartment buildings and homes in Gaza, claiming that it was reacting to rocket attacks by Hamas. More than 2,000 Palestinians – including about 540 children – and 73 Israelis were killed, while more than 11,000 were injured, with many people losing limbs or suffering horrendous burns.
Oxfam estimated that Gaza needed about 800,000 truckloads of construction materials for housing, including steel bars and cement. This would cover the damage done last year, when more than 16,000 homes were destroyed or made uninhabitable and a further 133,000 damaged. It would also cover houses damaged in previous conflicts but never repaired, and housing needs resulting from population growth.
“Less that 0.25% of the truckloads of essential construction materials needed have entered Gaza in the past three months,” said the agency.

The human cost of the Israel-Gaza conflict – in pictures

View gallery
Under the blockade, Israel limits the flow of concrete, cement and other materials into Gaza, arguing that they are “dual use” items that could also have a military purpose if taken by Hamas to rebuild the tunnels used to launch rocket attacks on its territory.
The failure to rebuild is exacerbating the trauma of nearly 1 million children, who, the aid agencies said, have experienced unimaginable suffering in three major conflicts spanning six years.
“Children are still coping with a tremendous amount of grief, the loss of loved ones. At the same time, a lot of them are still not in their homes … that’s unsettling, and it doesn’t enable kids to find their equilibrium and move forward,” said Pernille Ironside, chief of the Gaza office for the UN children’s agency, Unicef.
“There is just no visible improvement, let alone a tangible one in their own lives. If we were able to provide real markers of improvement that would instil and reinforce a sense of hope, which is essential,” she said.
About 80,000 children receive group or individual counselling, half of which is provided by Unicef. Even if they do go back to school (some are too scared to return to classrooms bombed last year), children find it difficult to concentrate, partly because of the trauma and partly because of conditions in crowded schools. Teenagers, in particular, were finding it hard to cope, and were experiencing feelings of hopelessness and helplessness, Ironside said.

“Even when they apply themselves, the chances of them realising their dreams are miniscule. That sense of loss of hope and helplessness really risks driving some of them over the edge, whether its climbing into rickety boats setting sail for Europe and risking drowning, or trying to jump the fence into Israel and getting shot, or joining a local militant group,” she said.
“These are very real choices that are available to adolescents and young Gazans today and they are going to making those choices more and more unless we provide them with meaningful opportunities that are attainable.”

As high-profile conflicts jostle for public and media attention, other humanitarian crises are pushed off the news agenda


Read more
The UN Office for the Coordination of Humanitarian Affairs’ financial tracking service shows that last year’s UN appeal for the occupied territories was only 48% covered, with pledges of $447m (£290m).
Last month, the UN Relief and Works Agency said it had been forced to suspend its cash assistance programme for repairs to damaged and destroyed homes and for rental subsidies because it had not received funds from donors.
The 30 aid agencies urged donors to meet pledges made at a conference in Cairo last October.
“Little of the $5.4bn pledged in Cairo has reached Gaza. Cash assistance to families who lost everything has been suspended and other crucial aid is unavailable due to lack of funds. A return to hostilities is inevitable if progress is not made and the root causes of conflict are not addressed,” they said.
Publicado por salud equitativa en 3:09