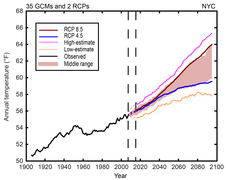 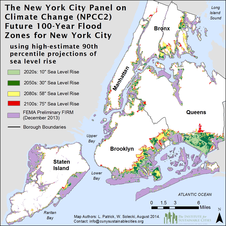 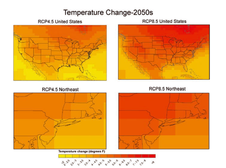 Map of annual temperature changes in the Northeast in 2050.
Image Credit:
NPCC, 2015 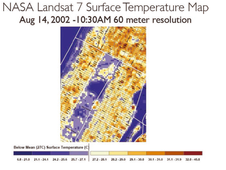 The report aims to increase current and future resiliency of the communities, citywide systems and infrastructure in the New York metropolitan region to a range of climate risks. Cynthia Rosenzweig of NASA’s Goddard Institute for Space Studies (GISS), New York, co-chairs the New York City panel.
The NPCC was founded in 2008 to study the effects of climate change on New York City’s five boroughs and surrounding region. As some of the leading Earth scientists in the metropolitan New York area, GISS researchers have been involved in the panel’s work since its beginning. The GISS climate model was used in climate projections, and scientists at GISS led the technical team, which analyzed the scientific data and developed the projections.
“The NPCC is a prototype for how federal government scientists and municipal policymakers can work together,” said Rosenzweig, who also is affiliated with the Center for Climate Systems Research at Columbia University’s Earth Institute, New York. "This collaboration will help ensure that climate science developed for the New York metropolitan region informs and draws from the best available information, positioning residents and planners to confront expected future changes in the most effective way possible."
Increasing temperature and heavier precipitation events, along with sea level rise, are projected by the report to accelerate in the coming decades, increasing risks for the people, economy and infrastructure of New York City.
Specific report findings about local New York observations and projections include:
- Mean annual temperature has increased a total of 3.4 degrees Fahrenheit (F) from 1900 to 2013. Future mean annual temperatures are projected to increase 4.1 to 5.7 degrees F by the 2050s and 5.3 to 8.8 degrees F by the 2080s, relative to the 1980s base period. The frequency of heat waves is projected to increase from 2 per year in the 1980s to roughly 6 per year by the 2080s.
- Mean annual precipitation has increased by a total of 8 inches from 1900 to 2013. Future mean annual precipitation is projected to increase 4 to 11 percent by the 2050s and 5 to 13 percent by the 2080s, relative to the 1980s base period.
- Sea levels have risen in New York City 1.1 feet since 1900. That is almost twice the observed global rate of 0.5 to 0.7 inches per decade over a similar time period. Projections for sea level rise in New York City increase from 11 inches to 21 inches by the 2050s, 18 inches to 39 inches by the 2080s, and, 22 inches to 50 inches, with the worst case of up to six feet, by 2100. Sea level rise projections are relative to the 2000 to 2004 base period.
“Climate change research isn’t just something for the future,” said Rosenzweig. “It’s affecting how key policy decisions are being made now. NASA is proud to work with New York City and other intergovernmental entities to provide world-class science.”
The report also uses NASA Landsat 7 data to map the surface temperature of mid-town Manhattan and show the cooling effect of Central Park. The Climate Impacts Group at GISS, led by Rosenzweig, provided technical support for the report.
NASA has a Climate Adaptation Science Investigator (CASI) program that is geared toward evaluating the risks facing NASA facilities due to climate change.  The GISS Climate Impacts Group is using processes and lessons learned during its work with the NPCC to support the CASI program. And CASI research focusing on the advance of key NASA products related to climate adaptation could also have future applications benefiting New York City. In addition, the proposed "Climate Change Resilience Indicators and Monitoring System" will utilize NASA data observations and measurements to help the city manage climate risk.
GISS is a laboratory in the Earth Sciences Division of NASA’s Goddard Space Flight Center, Greenbelt, Maryland and is affiliated with the Earth Institute and School of Engineering and Applied Science at Columbia University.
NASA monitors Earth's vital signs from land, air and space with a fleet of satellites and ambitious airborne and ground-based observation campaigns. NASA develops new ways to observe and study Earth's interconnected natural systems with long-term data records and computer analysis tools to better see how our planet is changing. The agency shares this unique knowledge with the global community and works with institutions in the United States and around the world that contribute to understanding and protecting our home planet.
For a copy of the NPCC’s 2015 report, visit:
http://onlinelibrary.wiley.com/doi/10.1111/nyas.2015.1336.issue-1/issuetoc
For more information about NASA GISS, visit:
http://www.giss.nasa.gov/
For more information about NASA's Earth science activities, visit:
http://www.nasa.gov/earthrightnow
Michael Cabbage​212-678-5516NASA's Goddard Institute for Space Studies, New Yorkmcabbage@nasa.gov
Leslie McCarthy212-678-5507NASA's Goddard Institute for Space Studies, New Yorkleslie.m.mccarthy@nasa.gov
Publicado por salud equitativa en 11:59