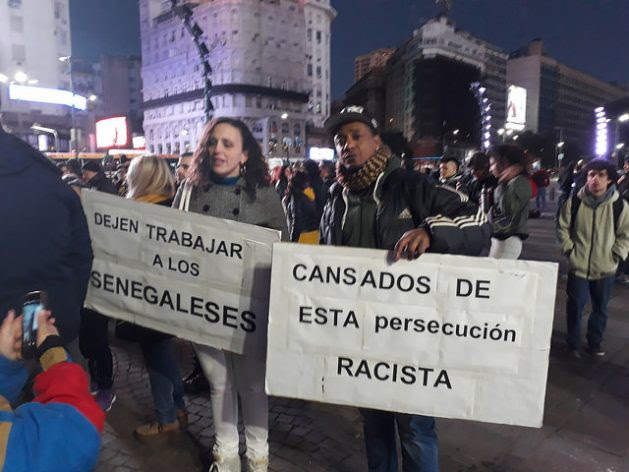 Police brutality against Senegalese street vendors in recent months has outraged Argentines and immigrants who demonstrated on Jun. 16 in Buenos Aires, carrying signs reading "Let the Senegalese work" and "Fed up with racist persecution". Credit: Daniel Gutman/IPS
BUENOS AIRES, Jun 22 2018 (IPS) - Senegalese immigrants began to arrive in Argentina in the 1990s and most of them joined the group of street vendors in Buenos Aires and other cities. But in recent months, they have suffered police brutality, denounced as a campaign of racial persecution.
“We always had a good relationship with the police. They even looked after my merchandise when I had to go to the bathroom. But lately everything has changed,” 35-year-old Moussa Sow, from Senegal, who has lived in Argentina for 11 years, told IPS.
“They take everything we have from us blacks, they often beat us, while they do not touch the things of those who are selling next to us,” added Sow, who is married to an Argentine woman and moves around the vast geography of Buenos Aires and its suburbs, depending on where he finds the smallest police presence, selling jewelry, eyewear and watches.
Sow was the only Senegalese present at a demonstration organised by young Argentines and non-African immigrants to denounce what is happening and demand that they be allowed to work, on Saturday Jun. 16 in front of the Obelisk, the most emblematic monument in downtown Buenos Aires.
“The Senegalese didn’t come (to the demonstration) because they’re afraid. It is clear that since last year there has been an order to persecute Africans, on the grounds that they are infringing the trademark law or conducting business in public places,” said Nengumbi Sukama, a human rights activist born in the Democratic Republic of Congo, who has lived in Argentina since 1995.
Earlier this month, the photo of Serigne Dame Kame, lying with a wounded arm in a pool of blood on the ground, surrounded by police officers, was widely disseminated on social networks. The 30-year-old Senegalese man was hospitalised and underwent emergency surgery, although he was detained. 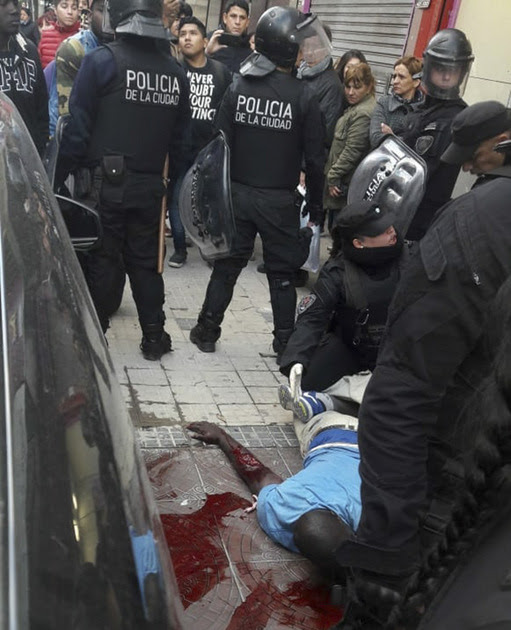 This photo of Senegalese immigrant Serigne Dame Kame, lying on the ground in a pool of blood with a wounded arm and surrounded by police officers, went viral in the social media and provoked outrage among the people of Buenos Aires. Credit: Twitter
The incident occurred on Avellaneda Avenue, a traditional shopping area in the Flores neighbourhood in Buenos Aires, and according to the version of the local police, Dame Kame fell into a shop window when he tried to escape from being arrested for trademark infringement.
But witnesses said that the police beat the immigrant and that one of them cut his arm with a knife and then quickly hid it in his uniform.
The situation was denounced by a group of human rights organisations, including the Centre for Legal and Social Studies (CELS), one of the leading human rights groups, and Amnesty International.
The cities of Buenos Aires and La Plata, 55 km away, have seen “disproportionate police operations in recent months to pursue street vendors, mainly of Senegalese nationality, violent and unjustified raids, constant intimidation, harassment and repeated episodes of physical and verbal violence against Senegalese workers,” said the human rights organisations in a statement.
“Both police and prosecutors use racial profiling to criminalise Senegalese workers,” they added.
There are no recent official figures on the number of African immigrants in Argentina. The latest census, in 2010, counted just 2,738 people from that continent, but experts say a large majority were not registered.
The National Migration Office provided IPS with data that show that over half of the African immigrants in Argentina are from Senegal, and that they are the only nationality from that continent with a significant community here.
Between 2004 and July 2017, permanent residence was granted to 2,380 people from Africa, 62 percent of them from Senegal, while temporary residency permits were issued for 5,536, 79 percent of them from Senegal.
Arfang Diedhiou, president of the Association of Senegalese Residents in Argentina (Arsa), told IPS that he estimates there are some 5,000 people from his country living here, a figure generally endorsed by academic researchers. He added that they continue to arrive.
In addition, the National Migration Office reported in 2017 that in the first five years of this decade the influx of sub-Saharan migrants, from Senegal as well as Nigeria, Cameroon, Ghana and the Gambia, grew by more than 80 percent. 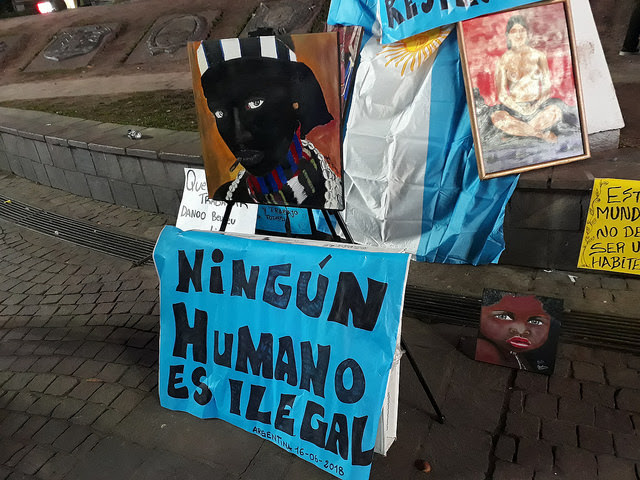 “No human being is illegal,” reads a banner with the Argentine flag in the background in the Jun. 16 demonstration against police brutality towards Senegalese street vendors in front of the Obelisk in Buenos Aires. Almost no Senegalese immigrants participated, apparently for fear of police repression. Credit: Daniel Gutman/IPS
Police attacks on Senegalese and other African migrants seem to be linked to the stiffening of policies against street vendors since 2016, under pressure from chambers of commerce. In fact, there are no reports of police brutality against African immigrants who are not street vendors.
The story began in the 1990s
According to the International Organisation for Migration (IOM), this South American country is the largest recipient of migrants in Latin America, in proportion to its population of 44 million inhabitants, with 4.8 percent of them born abroad.
A document published in 2017 by the UN agency states that the influx of Senegalese migrants began with a few “pioneers” in the 1990s and that since then, more and more immigrants have come by “word of mouth”, which is more important to the Senegalese than information that circulates through institutional channels.
Other contributing factors were the growing obstacles to enter European Union countries in recent years.
When they arrived, the only thing many Senegalese knew about Argentina was that it was the land of football star Diego Maradona.
Most of the immigrants are young, single men aiming to bring their families over, which usually takes many years to bring about. Of the Senegalese living in Buenos Aires, the IOM says, 63.74 per cent are between the ages of 20 and 34. Only 1.19 percent are over 60.
Sociologist Gisele Kleidermacher, who has been researching for years the integration of Senegalese immigrants in Argentina, told IPS that “they mostly live off street vending here because this is a traditional activity in their country, which has a large informal economy.
“In addition, they have difficulties in finding jobs, because they do not know the language and because they generally have a precarious immigration status,” she said. 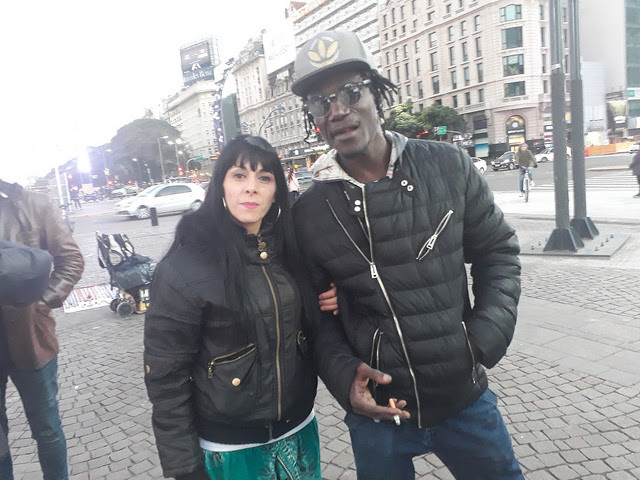 Moussa Sow, an immigrant who has been working as a street vendor in the Greater Buenos Aires area for 12 years, is photographed with his Argentine wife, Aldana Paviolo. Sow says that until recently he had a good relationship with the police in the Argentine capital, but that now he has been a victim of police brutality. Credit: Daniel Gutman/IPS
Kleidermarcher added: “While there has been a major escalation of violence in recent months, the situation is not entirely new. Several years ago three police officers stood trial for assaulting Senegalese immigrants and the court warned the officers about their racial bias.”
In January 2013, thanks to pressure from a working group made up of civil society organisations, the Argentine government launched a migration status regularisation plan especially designed for Senegalese and Dominican immigrants.
During the six months the programme was in force, some 1,000 Senegalese were able to regularise their immigration status.
Since then, “all those who arrived are undocumented,” said Diadhiou, a father of three children, one of whom was born in Argentina.
Many say that a government decree amending the Migration Act, issued earlier last year, helped trigger the climate of police brutality against Senegalese immigrants.
The new regulation speeds up the procedures for deporting foreign nationals accused of committing a crime and restricts access to Argentine citizenship.
The decree was challenged by human rights groups, which said it links migrants with criminality.
Several organisations took legal action and obtained a declaration of unconstitutionality from an appeals court in March. But the Supreme Court will have the final word.
Demián Zayat, coordinator of the institutionalised violence programme at the Buenos Aires ombudsman’s office, told IPS that “lately police have been seeking conflicts with Senegalese immigrants. They try to seize their goods, and when the vendors defend themselves, they are arrested on charges of resisting arrest.
“We believe that there is a strategy of bringing criminal charges against them, which complicates their situation because most of them are undocumented immigrants,” added Zayat.
He said that many Senegalese immigrants have reported that they were victims of police brutality, and that the ombudsman’s office is preparing a complaint, based on a number of cases.
“We will do it this way because obviously no one wants to make an individual complaint, because they are afraid of reprisals,” he explained.