The two talked together for nearly an hour in the official papal library in the Vatican's Apostolic Palace, about twice as long as Francis usually spends with heads of state or government. 
French President Emmanuel Macron, accused at home of straining France’s secularism by seeking to mend ties with the Catholic Church, discussed topics from Europe and migration to abortion in an unusually long meeting with Pope Francis on Tuesday. The two talked together for nearly an hour in the official papal library in the Vatican’s Apostolic Palace, about twice as long as Francis usually spends with heads of state or government.
“We didn’t look at our watches, which may explain why it lasted so long, that’s what it’s like when you have an intense discussion,” Macron told a news conference after the meeting.
73m

The Francis Effect
A critical and in-depth look at how one man has quickly changed the face of Catholicism at a moment when no one really expected it.
Macron and the pope discussed “protection of the environment, migration, and multilateral commitment to conflict prevention and resolution, especially in relation to disarmament,” a Vatican statement said. They also spoke about prospects for resolving conflicts in the Middle East and Africa and the future of Europe, it said.
Macron said the two had also touched on subjects including abortion rights and same-sex marriage, which is legal in France, though one topic apparently was off the table – Italian politics. “We did not comment the politics of one country or another during our exchange,” Macron said. Pope Francis meets Emmanuel Macron and his wife Brigitte during a private audience at the Vatican, June 26, 2018. (Reuters)


At the end of the private part of the audience, Macron gave Francis a rare copy of Georges Bernanos’s 1936 book “Diary of a Country Priest”. “I’ve read this book many times and it has done me good. It is a book that I have always loved very much,” the pope told Macron, 40, who was accompanied in the public parts of the meeting by his wife, Brigitte.
Francis gave Macron a medallion depicting Martin of Tours, a 4th century saint who is depicted cutting his cloak in half to give it to a beggar in winter.
“This means the vocation of those who govern is to help the poor. We are all poor,” Francis told Macron as he was giving him the medallion.
Macron earned himself the nickname “president of the rich” in France after scrapping a wealth tax and cutting a popular housing allowance in the first year of his mandate, hurting his popularity with the working class. Pope Francis greets Macron during a private audience at the Vatican, June 26, 2018. (Reuters)


As Macron left the library, he and Francis exchanged a two-cheek kiss, another very unusual gesture between a pope and a visiting head of state.
Two months ago, Macron called for stronger ties between the state and the Catholic Church, a move critics said blurred a line that has kept French government free of religious intervention for generations.
The issue is particularly sensitive in historically Catholic France, where matters of faith and state were separated by law in 1905 and which is now home to Europe’s largest Muslim and Jewish communities. France’s guiding principles also hold that religious observance is a private matter, for all faiths.
Macron, who said he had discussed “the place of catholicism” in France with the pope, was raised in a non-religious family. He was baptized a Roman Catholic at his own request when he was 12. 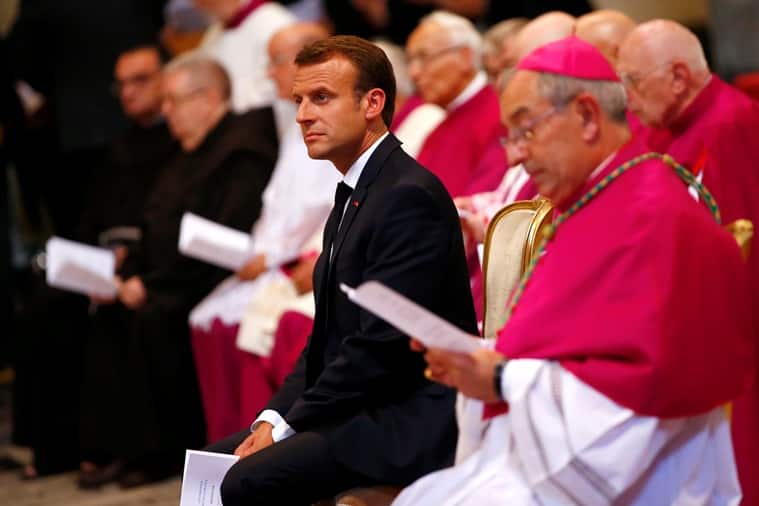 Macron attends a ceremony to receive the title of “First and Only Honorary Canon” of the Rome Basilica of St John’s in Lateran, Italy, June 26, 2018. (REUTERS)


After leaving the Vatican, he was installed as the “First and Only Honorary Canon” of the Rome Basilica of St John’s in Lateran, which is the pope’s cathedral in his capacity as bishop of Rome.
Under a tradition that began in the 15th century when France was a monarchy, French leaders are automatically given the title. Macron took his seat of honour in the basilica’s elaborately carved wooden choir stall to the applause of those in attendance, including members of the local French expatriates community.
For all the latest World News, download Indian Express App
Publicado por salud equitativa en 5:20