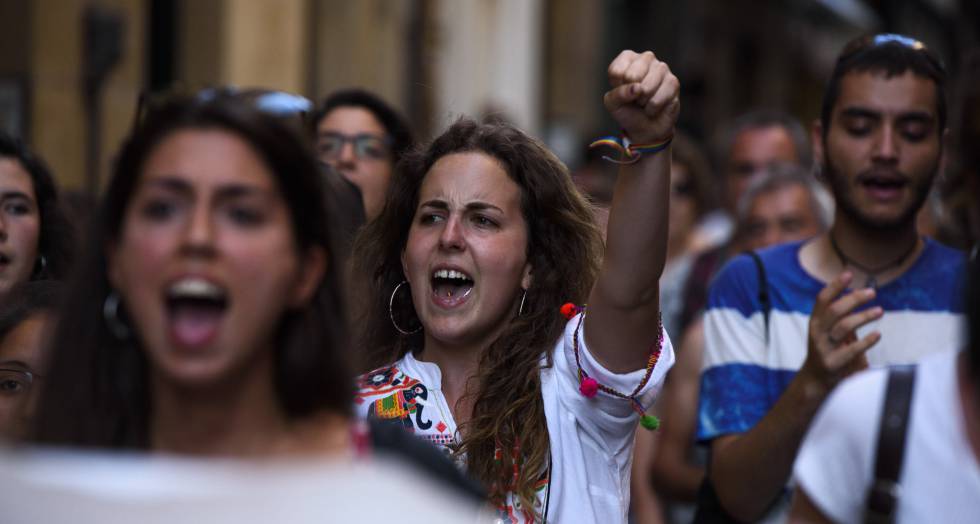 Protest in Pamplona after bail set for culprits of La Manada. PABLO LASAOSA
A Spanish court on Thursday decided to provisionally release five men who were sentenced in April to nine years in prison for sexually abusing a young woman during the 2016 Running of the Bulls in Pamplona.
The decision immediately sparked street protests in a case that has galvanized public opinion and raised questionsabout the need to overhaul Spanish legislation on sex crimes.
In the wake of the court’s decision, the Spanish government said it is considering legal reforms. Government spokeswoman Isabel Celaá added that authorities are also weighing the option of making the state’s legal services party to any legal proceedings involving sexual abuse, in order to defend the victims.

JUSTA MONTERO, FEMINIST
“The proven facts in the case are serious, very serious, and the government is echoing the social alarm and concern,” said Celaá, who added that the judiciary’s decisions must nevertheless be respected.
The Navarre Regional Court decided to release the five men until their April ruling becomes final and no longer subject to appeal. They had been in preventive custody since July 7, 2016 and the three-judge panel in charge of the case could have extended that a further two-and-a-half years.
Instead, in a two-to-one decision, the court decided to let them go after setting bail at €6,000, arguing that their place of residence, Seville, is far away from the victim’s own home city of Madrid, that they are not a flight risk, and that none of the men had a prior record for similar crimes, making them unlikely to re-offend.The fact that their names and faces have become public knowledge was also cited as a guarantee against recidivism.
The lawyer for four of the five men, Agustín Martínez Becerra, said he trusted his clients would walk out of prison on Friday after posting bail. He also expressed “surprise” at political parties’ public embrace of the social rejection expressed on the streets. Martínez Becerra said it seemed that “the streets are dictating judicial decisions.”
There were protests in Pamplona, Barcelona and other cities that had already seen public demonstrations against the members of “La Manada” – meaning “wolf pack,” and the name given to their group chat on WhatsApp – when the original decision came out in April. Back then, the court found the men guilty of sexual abuse but acquitted them of rape, which would have entailed longer prison sentences. The prosecution had sought 22 years for each defendant.
The Popular Party’s congressional spokesman, Rafael Hernando, blamed the release on “the slow pace” of the courts. “If they had acted faster, we would not be in this situation. People cannot be kept in prison any longer that what the law stipulates.”
Podemos leader Pablo Iglesias said that the release evidences that “the law doesn’t work” and does not serve to protect women. “And if the law doesn’t work, then the law must be changed.” Iglesias said his party will ask Congress to reform the criminal code to end the distinction between sexual abuse and aggression.
Ciudadanos leader Albert Rivera said that while he respects the court’s decision, “I do not share it. […] We must reinforce our penal system to cover these cracks.”
“This justice is shit,” chanted protesters in Pamplona, which is gearing up for this year’s Running of the Bulls in early July. The country’s main unions, CCOO and UGT, have backed plans for new street protests.
“We feel tremendous indignation at a patriarchal system that neither protects nor believes women,” said Justa Montero, a feminist who helped organized the national strike on March 8, International Women’s Day.
New marches have been announced for Friday across Spain, most of them starting between 7pm and 8pm in places such as Madrid, Seville, Valencia, Zaragoza, Málaga, Alicante, Girona and Valladolid.

In its April ruling, the court described how the victim felt “stunned and unable to react” after being led into the lobby of a residential building by the men. She felt “intensely overwhelmed and disturbed, which produced shock and made her adopt a passive and submissive attitude, meaning that she did what the accused asked her to do, keeping her eyes closed for most of the time.”
In two videos, the 18-year-old appears “shrunken and cornered against the wall by two of the accused,” expressing “cries that reflect pain.” Other scenes show “the submission and subjugation of the victim to the will of the accused,” while one of the men makes “boastful, ostentatious and bragging” gestures.
Despite this evidence, the judges said that the woman’s consent was compromised but that there was no violence or intimidation, two necessary requirements for rape under Spanish law.
The decision triggered mass protests across Spain, with women chanting “They don’t believe us unless they kill us” – a reference to the case of Diana Quer, a Madrid teenager who was murdered after she fought off a man who tried to sexually assault her.
English version by Susana Urra.
Publicado por salud equitativa en 5:04