The visit also comes amid a brewing trade war between the world's two largest economies and sharp U.S. criticism over China's militarization of its island holdings in the South China Sea. 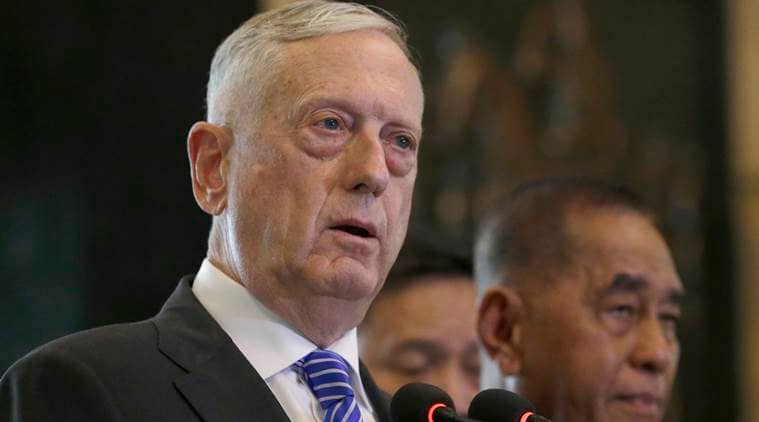 “So I’m here to keep our relationship on a great trajectory, going in the right direction,” Jim Mattis said meeting the Chinese Defense Minister. (AP Photo/Tatan Syuflana)
U.S. Defense Secretary Jim Mattis and his Chinese counterpart struck a positive note as they sat down Wednesday to tackle the thorny issue of how to get North Korea to fulfill a pledge to abandon its nuclear program.
Mattis said he and Defense Minister Wei Fenghe opened discussions in Beijing with a “very open and honest dialogue.”
This is a modal window.

U.S. indefinitely suspends some more training exercises with S.Korea
The United States and South Korea have agreed to indefinitely suspend two exchange program training exercises, the Pentagon said on Friday, a sign that promises made during the Trump-Kim summit are being kept.
Wei said the visit is important to increase strategic trust and enhance the cooperation between them.
In a later meeting, Chinese President Xi Jinping _ who also heads the commission overseeing the People’s Liberation Army _ called relations between the militaries a “model component of our overall bilateral relations.”
Mattis, a retired Marine Corps general, said the U.S. assigns the same degree of importance to the relationship.
“So I’m here to keep our relationship on a great trajectory, going in the right direction,” he said.
None of the leaders mentioned specific issues in their opening statements in front of reporters, but North Korean denuclearization was expected to top the agenda.
President Donald Trump’s announcement of a suspension of major annual military exercises with South Korea fulfilled a long-time Chinese wish.
China is the North’s main source of aid, trade and diplomatic support and backs Pyongyang’s call for a “phased and synchronous” approach to denuclearization, as opposed to Washington’s demand for an instant, total and irreversible end to the North’s nuclear programs.
The visit also comes amid a brewing trade war between the world’s two largest economies and sharp U.S. criticism over China’s militarization of its island holdings in the South China Sea.
The Pentagon disinvited the Chinese navy from a multinational naval exercise the U.S. is hosting this summer in what it called “an initial response” to China’s fortressing of man-made islands in the crucial waterway.
Despite that, both sides reaffirmed the importance of maintaining exchanges, with Mattis saying he was visiting because of the importance that “we in the U.S. military place on the military-to-military relationship with the (People’s Liberation Army).”
For all the latest World News, download Indian Express App
Publicado por salud equitativa en 5:39