From Fake News to a Fake Death | Inter Press Service

From Fake News to a Fake Death | Inter Press Service

From Fake News to a Fake Death 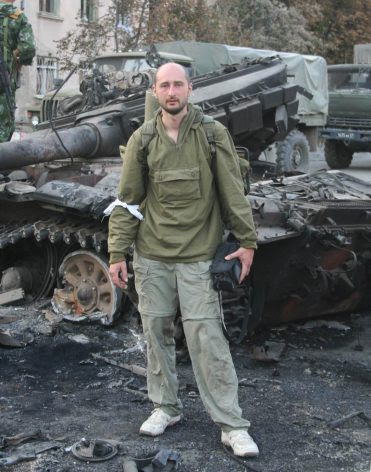 Arkady Babchenko. Credit: Wikimedia Commons
KIEV, Jun 14 2018 (IPS) - When news broke on May 29th that journalist Arkady Babchenko had been murdered in Ukraine, serious questions about the safety of journalists in the country were raised.
When news broke less than 24-hours later that Babchenko’s murder had been staged by the Ukrainian security service, serious questions about the credibility of journalists in the country were raised.
"Now we know we should check everything the authorities say not twice, but three or four times." --Anna Babinec

Now, say global press freedom advocates, efforts to keep journalists in Ukraine and other parts of the world safe have only been hampered by the deception.
Johann Bihr, Head of the East European and Central Asian Desk at Reporters Without Borders (RSF), told IPS: “This discredits journalists and hampers efforts to effectively protect them.
“The global impact of this story means that it will have an effect in other countries. Whenever something similar happens, doubts will be raised.”
Babchenko, a former Russian soldier who had fought in Chechnya, had been a vociferous critic of the Kremlin for years. He fled Russia last year fearing for his life and eventually moved to Kiev where he had been working for the Tatar TV channel ATR.
When reports of his death first emerged, there was immediate speculation of Russian involvement – a theory Ukrainian authorities swiftly confirmed.
In the hours after the killing was reported, Moscow denied any involvement and, after Babchenko appeared alive, claimed it was evidence of Kiev’s anti-Russian propaganda.
But as soon as Babchenko appeared at a press conference held by the Ukrainian security services (SBU) the day after his apparent death, revealing he had been co-operating with the SBU in an operation to expose people apparently planning to kill him, press freedom watchdogs were outraged.
In a statement, Philippe Leruth, President of the International Federation of Journalists (IFJ), described it as a “complete circus” and told the Ukrainian authorities it was “intolerable to lie to journalists around the world and to mislead millions of citizens”.
RSF secretary-general Christophe Deloire said there “could be no grounds for faking a journalist’s death”. He said staging the killing “would not help the cause of press freedom,” adding in a tweet: “It is pathetic and regrettable that the Ukrainian police have played with the truth, whatever their motive…for the stunt.”

And the Committee to Protect Journalists (CPJ) warned it could potentially “undermine public trust in journalists and to mute outrage when they are killed”.
The SBU, and Babchenko, have continued to defend the operation. In posts on Facebook, Babchenko said he did not care about criticism questioning the journalistic ethics of what he and the SBU had done, saying he was grateful that the operation had saved his life.
But groups like RSF, CPJ and IFJ say while they are relieved Babchenko is alive, they question whether the mass deception, and subsequent damage to journalists’ and the Ukrainian authorities’ credibility, was worth it.
“We are glad that Babchenko is alive and are in no doubt that the threats he had been facing were real. However, what we are waiting for is the Ukrainian government to present hard evidence that this was worth it and it has really led to some results. So far, they have failed to do so,” Bihr told IPS.
Ukraine has a poor record on journalist safety. Journalists regularly face harassment and physical attacks as well as ‘doxing’ – the publication of their personal information.
Seven journalists have been killed in the last four years in Ukraine, the most recent being Belarusian-born Russian journalist Pavel Sheremet who died in a car bomb assassination in July 2016.
The investigation into his murder has stalled amid claims of a lack of effort from investigators and Ukrainian involvement in the killing.
After Babchenko’s staged murder, Larysa Sargan, spokesperson for Ukrainian Prosecutor General Yuriy Lutsenko, drew up a list on her Facebook page of journalists she claimed had been “traitorous” for criticising the operation.
In the wake of the faked murder, while all local journalists have been quick to stress their relief that Babchenko is alive, their opinions on the merits of the operation differ.
Some have praised it as the best way to save a threatened journalist’s life and expose a Russian plot, but many others have been critical of it and some have linked it back to what they say are serious shortcomings among institutions of power towards journalists‘ safety and freedom of speech.
Olga Rudenko, deputy editor-in-chief at the Kyiv Post newspaper, told RFE/RL: “Ukrainian journalists feel even less safe than they used to. To make it a safer place for journalists, the authorities need to investigate crimes against journalists.
“The whole plot to kill Babchenko, if we presume there was one, was only possible in the first place because so many earlier murders and attacks on journalists remain un-investigated, making for an atmosphere of impunity. Who’d sign up to kill a high-profile journalist if they knew all previous killers had been found and punished?”
Anna Babinec, co-founder of the investigative journalism agency Slidstvo.Info, said the incident had, for many journalists, stripped them of what trust they had left in Ukrainian authorities.
She told IPS: “Many journalists who lacked trust in the Ukrainian government before now have absolutely no trust in it.
“As an investigative journalist, working the whole night at the scene of the ‘crime’ was a great test of my skills. Now we know we should check everything the authorities say not twice, but three or four times. We need to check not only if the police are doing their work properly, but whether they are lying about crimes.”
She added: “As a journalist and human being I’m happy that my colleague is alive, but there are still a lot of questions that the security service and Arkady [need to answer] about this special operation.”
This distrust has deepened in the days since the operation with the SBU reluctant to give further details and both the alleged killer and man who hired him claiming to have been working with the SBU all along.
The leak of a reported ‘hit list’ of 47 people, supposedly discovered by the SBU during the operation, has added to the confusion.
The list, which includes journalists and political activists, contains the names of many critics of the Ukrainian authorities, among others, but, pointedly, does not include Babchenko.
Some local journalists believe it is genuine, but others doubt its veracity. Speaking to RFE/RL, three journalists on the list said they had been contacted by the SBU and shown a list with their names on. They said what they had been shown was similar to the list leaked in Ukrainian media, but had a different order of names and, in some cases, spellings.
One of the journalists said they had been questioned by the SBU about their political opinions.
Whether the SBU will give any further details on the operation and show it was, as the RSF said ‘worth it’, anytime soon is uncertain.
But the fact that local and global media were misled by authorities, with the willing help of a journalist, means this is likely to be a boon for those looking to repress free speech or spread propaganda as it leads to questions about the skills and credibility of those who are supposed to be presenting unbiased facts, critics say.
Russian journalist Tanya Felgenhauer told British daily newspaper The Independent: “This story has been a victory of the post-factual world and it makes our jobs even more difficult.
“One of the only advantages we have over social media and state media is accuracy and fact-checking. Here, our fact-checking model wasn’t sufficient, and our credibility has suffered badly.”
The RSF’s Bihr told IPS: “It provides help for organisations who sow doubt and spread misinformation, who blur the lines between truth and fiction. It provides fuel for repressive governments and propaganda media working to hamper freedom of speech.”