Franco's legacy: Should the Valley of the Fallen be allowed to fall into ruins? | In English | EL PAÍS

Franco's legacy: Should the Valley of the Fallen be allowed to fall into ruins? | In English | EL PAÍS

Should the Valley of the Fallen be allowed to fall into ruins?

Historians Julián Casanova and Santos Juliá, and Hispanist Paul Preston, discuss what should happen to the Spanish Civil War monument, as the new Socialist government prepares to move Franco’s remains from the site 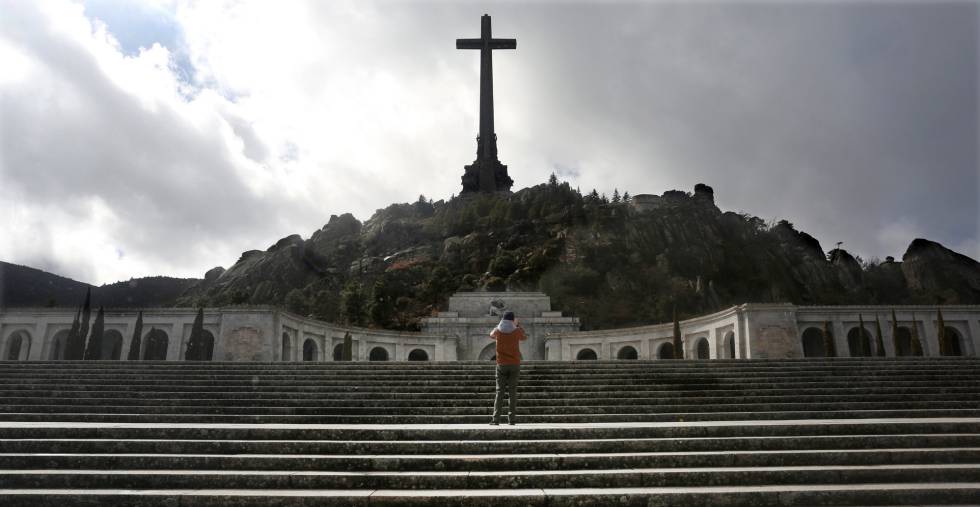 The cross atop the Valley of the Fallen monument. JAIME VILLANUEVA
“The scale of our Crusade […] cannot be perpetuated by the simple monuments that are usually used for commemorations in towns and cities […] There is a need for the stones that are raised to have the grandeur of monuments from the past […] so that future generations can pay tribute with their admiration of the heroes and martyrs of the Crusade.” So said former Spanish dictator Francisco Francoin a decree dated April 1, 1940, and which would eventually give rise to the Valley of the Fallen, located on a hillside in the north of Madrid.

There are no monuments to Hitler in Germany or Austria, nor to Mussolini in Italy

HISTORIAN PAUL PRESTON
The controversial construction – which is topped by a giant white cross that can be seen from miles around, and contains the mortal remains of Franco – was designed to be a “monument from the past” in the style of the Egyptian pyramids and was meant to immortalize his victory in the Spanish Civil War (1936-39). More than four decades after the death of the dictator, and with the new Socialist government of Pedro Sánchez talking about removing Franco’s remains, the historians Julián Casanova and Santos Juliá, and the Hispanist Paul Preston, agree that the symbolism of the monument has not changed, and celebrate the fact that democratic Spain is finally about to intervene in the mausoleum. They disagree, however, on the best way to do so.
“The Valley of the Fallen is the monument to the victory of national-Catholicism,” argues Santos Juliá. “It is in its architecture [its cross measures 130 meters high], in the words that were pronounced when it was inaugurated… It was the monument to the triumph of the Crusade over an enemy that had to be exterminated and continues to be one given that it has never been changed.”
For Preston, it’s an anomaly in the European Union. “There are no monuments to Hitler in Germany or Austria, nor to Mussolini in Italy.” In its current state, argues Casanova, “it’s a tribute to Francoism, not to reconciliation. There’s a historical explanation for intervention.”
The mausoleum at the site is home to the remains of at least 33,847 people from both the Nationalist and Republican sides of the Civil War: the winners, and the losers. Franco estimated that the monument would be built in five years, but it took 18. Nearly 20,000 men, many of them prisoners of war or political prisoners, Casanova points out, worked on its construction.
The initial enthusiasm among families of the “fallen from the Crusade” to move their remains there began to peter out, and when local councils were instructed to supply information about the existence of their war graves, many answered saying that they did have them, “but they are the fallen from the red army.” Franco took the decision to stock his mausoleum with remains from the Republican graves.
Nearly 20,000 men, many of them prisoners of war, worked on its construction
But the speech he made on the day that the monument was opened revealed that this was not done in the spirit of reconciliation. “Our dead did not sacrifice their precious lives so that we can rest,” he stated. “The anti-Spain was beaten, but it is not dead. Periodically, we see it raise its head.”
Preston is in favor of moving the remains of the dictator away from the Valley of the Fallen, as the Socialist Party government has already said it will do. “It’s a good initiative, because while the remains of Franco are there, it will continue to be a place of pilgrimage for those who were in favor of his dictatorship.”
Santos Juliá, however, does not believe that the Valley of the Fallen can be turned into something else. “It’s impossible to give it a new meaning, but nor is it logical for it to continue to mean the same thing. The best destination for that place is to become a ruin. Not for it to be blown up, but to let it fall apart, for time to devour it, after the body of Franco is exhumed and his remains handed over to his family. The monks can go to another monastery.”
The historian believes that there is sufficient consensus to move the remains of the dictator, and that a memorial for all of the victims of the conflict should be built in another location. “It’s a question of state,” he says. “If not all of [the bodies] can be identified individually, and the families are in favor, they could be taken to that memorial. Of course, there would be no room for the remains of Franco, because he is not a victim, he is the winner of the War, but there would be a place for those who died in the first months under the authority of the government of the Republic. Democracy cannot do the same as the dictatorship: just remember its own.”
English version by Simon Hunter.
Publicado por salud equitativa en 5:50