A year after Trump’s withdrawal from the Paris Agreement 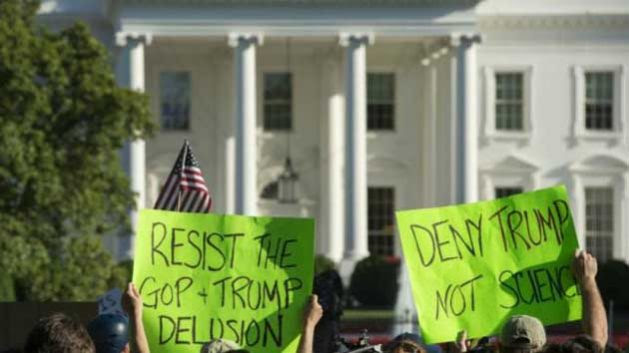 Americans protest President Trump's withdrawal from the Paris Agreement on Climate Change outside the White House in June 2017. PHOTO: ANDREW CABALLERO-REYNOLDS/AFP
Jun 6 2018 (The Daily Star, Bangladesh) - A year has passed since President Trump announced that the United States would formally withdraw from the Paris Agreement on Climate Change. What has happened since has been a mixture of good and bad—but on the whole, more good than bad.
The obvious bad news was that the biggest and richest country was reneging on a commitment made by its president in Paris. This had several consequences, including the halting of the US pledge to provide funding for the Green Climate Fund (GCF) as part of the commitment of developed countries to provide USD 100 billion each year from 2020 onwards.
It also meant that the US federal government would not try to fulfil the commitments that it had made under President Obama to reduce its emissions of greenhouse gases.
However, the worst news is by far for the citizens of the US rather than for the rest of the world. This is the denial of the science and reality of human induced climate change by Trump and the head of the Environment Protection Agency (EPA). This has already had the effect of depriving US citizens of the protection from its own federal government to adapt to the adverse impacts of climate change. The more than 4,000 deaths of US citizens in Puerto Rico attributable to Hurricane Maria are just one example.
In contrast, the good news is that many people in the US are not following or even supporting their president. There is a growing movement of Americans who say they are still in the Paris Agreement and will do their best to fulfil the US commitments made under President Obama.
For example, around 20 governors of states, led by Governor Jerry Brown of California, have declared their intentions to fulfil their obligations under the Paris Agreement. In fact, California (which by itself is the 7th largest economy in the world) will be hosting a global summit on climate change in September this year.
At the same time, Mayor De Blasio of New York is leading many dozens of mayors of cities who are committed to fulfilling their obligations as well. In fact, he has re-constituted President Obama’s Climate Change Experts Advisory Committee which Trump had dismissed as soon as he moved
into the White House. This committee is now based at Columbia University in New York and is being funded by both the city of New York and the Governor of the State of New York.
Another even more important change for the better is the market driven shift from fossil fuels to renewable energy across the US even in states under Republican governors. This, despite efforts by Trump to subsidise the coal industry. No one wants to invest in coal any more.
At the international level the major reaction to the US withdrawal from the Paris Agreement was to rally everyone else to redouble their commitment. Thus, for example, President Macron of France offered to make up the financial contribution of the US in the Intergovernmental Panel on Climate Change (IPCC) while other developed countries have promised to make up the US deficit of USD 100 billion per year from 2020 onwards.
Another important indicator of US’ isolation on this issue is the fact that not a single country joined the US in withdrawing from the Paris Agreement (unlike when they withdrew from the Kyoto Protocol with Australia by their side).
Perhaps the biggest shift that has taken place, which is not necessarily directly attributable to Trump’s decision to withdraw from the Paris Agreement, is the inexorable global shift from fossil fuels to renewable energy driven by a combination of technological advances in wind and solar energy efficiency, along with improved electricity storage capacity (which allows the intermittency problem to be solved).
Countries like China and India are in the forefront of this revolution in energy systems and are likely to be the winners in the 21st-century race to a post-fossil fuel world leaving the US behind and 20th-century technologies.
Finally, while it is important to acknowledge that the decision of Trump to officially withdraw from the Paris Agreement is not a good development for the world, nevertheless, the fact that the rest of the world, and indeed even the people in the US, don’t agree with him is the ultimate good news.
One of the most important, but under-appreciated elements of the Paris Agreement on Climate Change is that while it required the leaders of all countries to come to an agreement first, the implementation of the agreement does not necessarily need those leaders anymore. Anyone and everyone can do his or her own part to implement the agreement without permission from political leaders.
In less than a year of President Trump’s withdrawal, this fact has become abundantly clear.

Saleemul Huq is Director, International Centre for Climate Change and Development at the Independent University, Bangladesh.
Email: Saleem.icccad@iub.edu.bd
This story was originally published by The Daily Star, Bangladesh