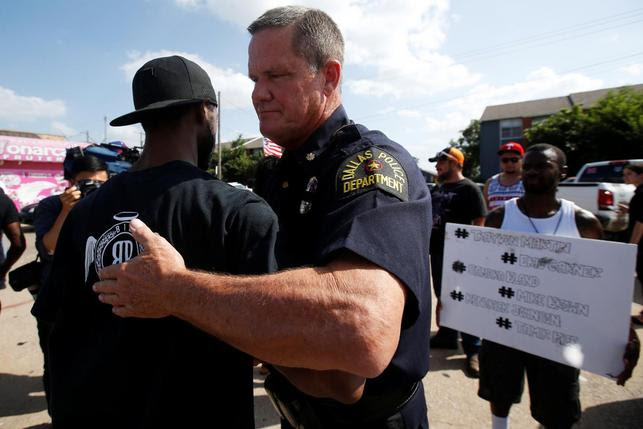 Do we have race problems? Police problems? Both? What can be done?
Turn on the TV or open the newspaper in America today and you will see a dialogue—perhaps overdue—about social themes of the importance of human lives, racial equality, respect for the law, the rights of people to speak their voices, and whether or not we, as Americans, are as divided as we seem. These issues have come up with a certain strength today in America due to the confluence of at least three major events—two concerning a police-involved shooting, and one concerning a home-grown terrorist who sought to assassinate white police officers—within a few days. However, they are not new. In Chicago alone, the tension over police-related cases has resulted in the firing of the Chicago Police Chief and nearly cost the Mayor of Chicago his job.
However, while the discussion is over major social, cultural and political trends, Gregory Thomas, President of the (US) National Organization of Black Law Enforcement Executives (NOBLE), reminds us that all policing is local, as he told me on radio Thursday.
It’s an unfortunate tide of events that have occurred in the past week, like getting hit in the gut three times. Shot on video, we had two police shootings, and the third event being the Dallas shooting of police officers. It doubled the nation over. So now we’re sitting here in pain, and it happened on consecutive days. We’re making it a national issue, but it’s a local issue.
While the reality is that about 95 percent of police are doing the right thing, that means five percent aren’t, and it’s all local. So if the cop on my block will stop me in my vehicle and harrass my kids, then that’s the whole police department to me. I don’t know what the other 99 are doing.
What a law enforcement officer is doing, and what a citizen is doing, in any given moment, is at the center of these terrible events.
It’s an important point lost in much of the rhetoric: each of these cases involve individual decisions of people in very different circumstances. It was the decision of an officer in Falcon Heights, Minnesota to pull over Philandro Castile. It was the decision of Mr. Castile and the decision of the Officer that led to the shooting. It was the decision of Mr. Castile’s girlfriend that led to the aftermath being filmed, uploaded on the internet, which led to a series—perhaps tens of thousands—of other decisions of how to react to that video. It was the decision of religious officials to honor his mother’s request to hold a funeral for him in the Catholic Cathedral of St. Paul, Minnesota, and it was the decision of the family not to invite the media to that funeral.
The current events, on the one hand, point out that there is significant tension under the surface in America over the relationship between members of certain racial groups and the police. This tension, however, cannot be simplified since the members of all those same groups are also members of the police. We cannot forget that an Asian and a Hispanic police officer were the victims of the shooting in New York last year. And we should not forget that an African-American mother was also injured in the shooting of the white police officers in Dallas last week.
On the other hand, the current events conceal the individual nature of these choices. The Dallas shooter, as President Obama pointed out, most certainly does not represent all Black Lives Matter protesters. The same must be said for the cases of police abuse of power. Those individuals who abuse their power, or who make wrong decisions, must be held accountable. What will not help on this front is when the decision of one, or some, is attributed to a broader group. And yet, the principle that all policing is local reminds us that people form opinions—and opinions are decisions in the mind—based on what they see and experience.
If the events recently in America teach us anything, they should first show us the great need for a serious dialogue that seeks to bring all people to equal treatment before the law, as well as reminding us that every decision we make in our individual lives—be it a police officer carrying out his beat, or a business person at his desk—carries ramifications well beyond that individual, and, in a way, impacts the social fabric of which we are all part.
We have to decide who we want to be, and what we’ll do to achieve that goal in our lives, homes, communities and nation.

Hot on Wednesday's themes of free speech and political leadership, we bring you...more free speech and political leadership!
Paul Coleman traces the origins of 'hate speech' legislation in Europe to a surprising, or perhaps not so surprising source.
Meanwhile, your obedient servant offers an admittedly pessimistic post-election analysis of the revolving-door of Australian political leadership. We survived the Rudd-Gillard-Rudd saga; will we now be subjected to an Abbott-Turnbull-Abbott spectacle? I don't condone gambling, but bookies are only offering $2.50 on Abbott as the next leader of the Liberal party.
If you prefer a longer-term approach to leadership reflections, Francis Phillips has the book for you with an incisive review of The Romanovs:1613-1918 a no-holds-barred history of the enduring yet ill-fated Russian dynasty.
It's been a pleasure stepping into the breach, but I'm sure you'll join me in hoping Carolyn is back in good health next week!