THE OTHER SIDE OF WAR CRIMES ▼ MercatorNet: The Crime and the Silence

MercatorNet: The Crime and the Silence

The Crime and the Silence 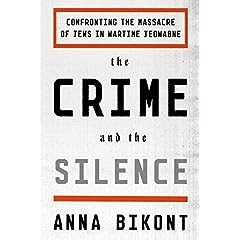 In May 2000 a Pole called Jan Gross wrote a book “Neighbours”, about a long hidden crime perpetrated by Poles in the eastern Polish town of Jedwabne against their Jewish neighbours when, on 10th July 1941, hundreds of Jewish men, women and young children were herded into a barn which was then set on fire. Inevitably the book caused outrage within the country: how dare the writer slander Poles when it was clearly a German atrocity?

Unfortunately it wasn’t. Anna Bikont, an award-winning Polish-Jewish journalist decided to follow up Gross’s book with her own investigations. This absorbing and appalling story is the result. First published in Poland in 2004 and translated into English in 2015, her book - part interviews, part journal, part written testimonies – deserves to be read by anyone interested in Catholic-Jewish relations in Poland who is prepared to accept some deeply unpalatable truths.

Despite the denials, it is obvious from reading Bikont’s account that there has been an historical, dark stain of anti-Semitism in Poland – particularly in the eastern region, nearest to Russia. Certain priests and bishops shamefully reflected this in their own writings and pronouncements from the lectern. Abetting this native prejudice against Jewish neighbours - families who had settled in Poland for decades if not centuries - was the outlook of the pre-war nationalist party in Poland: to be a true patriot you had to be Polish, not Jewish.

The war made all this much worse; between 1939 and 1941 the districts bordering Russia were overrun by Soviet troops. They mistreated and deported to Siberia people from both sections of the population – but at least the Jews knew they were not singled out for particular persecution. Some freethinking Jews were also Communists, which did not help to endear then to their Catholic neighbours in Jedwabne. Then in 1941 the Russians withdrew, leaving the local Jewish population to the mercy of the German invaders. This gave the Catholics, already brutalised and impoverished by enemy occupation, the chance to take revenge on people they feared and mistrusted (and whose belongings they greedily coveted), knowing that the German soldiers would turn a convenient blind eye on a locally organised pogrom.

All the facts were painstakingly investigated by the Polish prosecutor appointed for the task, Radoslaw Ignatiew. He earns the author’s respect for his patient, fair-minded handling of this explosive and controversial story. Despite the wrath of certain members of the hierarchy and the fury of the local descendants of the murderers, he concluded that “Strictly speaking, Poles did it.” At the very least 340 people were murdered; and the killers, respectable townspeople helped by young thugs, some from neighbouring villages, numbered about 40. Ignatiew added soberly at the end of his report: “I have to say in the course of the investigation I have encountered blatant expressions of anti-Semitism.”

Anna Bikont, who only discovered her own Jewish inheritance as an adult, is a brave woman. Despite the hostility she was shown by the residents of Jedwabne, the many doors shut in her face, the telephones slammed down and defamations in the press, she never gave up. The journal parts of the book at first seem tedious in their attention to minute details of her experiences throughout 2001. Then the reader comes to see that Bikont wants them to accompany her on a sad journey, in which everything has to be recorded out of respect for the dead and for the sake of the justice which has been denied them.

The testimonies of the survivors and the grainy photos of their dead relatives are heartrending to read and see – as is the continuing fear of those she interviewed, that they will be persecuted by Polish neighbours, even 60 years later.

Francis Phillips writes from Buckinghamshire in the UK.
- See more at: http://www.mercatornet.com/articles/view/the-crime-and-the-silence/17388#sthash.S5Q30lAR.dpuf

Over recent weeks the issue of conscientious objection, or the “conscience clause” in the Belgian euthanasia law has been brought into the spotlight by the assertion by the new Catholic Archbishop of Mechelen-Brussels, Jozef De Kesel, that he has the right to refuse Catholic hospitals and aged care facilities to co-operate with euthanasia.

Euthanasia advocates both in academia and in the medical profession have bristled at the suggestion that institutions could say “Non” with many displaying a distinct and disturbing lack of understanding about the status of the 14 year old statute that allows doctors to kill their patients.

The Belgian law clearly provides a conscientious “out” for doctors and others assisting in a euthanasia but it is silent about institutions. Some suggest that the extension of a right of conscientious objection to institutions such as churches is implied while others suggest, dubiously to my thinking, that silence suggests otherwise.

The unexpected intransigence has brought to light a subtle, but important, distinction in the euthanasia law. In spite of the rhetoric, euthanasia is not legal in Belgium. The 2002 statute simply creates a defence in law for doctors who commit an act of euthanasia when they fulfil certain conditions. Fernand Keuleneer, a lawyer and alternate member of the Euthanasia Evaluation Commission for 10 years agrees, He told the media: "It is wrong to argue that the law requires Catholic hospitals to apply euthanasia. The law does not create a subjective, let alone fundamental right to euthanasia, but is limited to non-criminalization of doctors who perform euthanasia in legal terms.”

Initially all this seemed like like an academic exercise with no one expecting the new bishop to force a showdown. But a showdown was already in the making.

Belgian news outlets have reported that a Catholic nursing home has refused to allow a doctor onto its premises to perform euthanasia. According to reports, his 74-year-old female patient was terminally ill with metastatic cancer and was living in the St. Augustine residential care centre in Diest.

The process of requesting euthanasia began in 2011 and progressed for six months before St. Augustine’s management refused access, supposedly only days before the euthanasia was to take place. The various stories do not say whether or not the facility was formally aware of the process. However the family says that, after initially believing that the matter was simply a misunderstanding, they arranged for the woman to be transported to a private residence where the death took place. The family are claiming that the facility caused additional psychological and physical suffering for their mother.

The matter is listed to be heard in a civic court in Leuven in April – more than four years after the woman’s death and after the matter had already been postponed twice before -- why, we are not told.

I smell a rat.

This issue precedes the current controversy over the Archbishop’s refusal to allow euthanasia to take place in Catholic nursing homes. It does not take a cynic to ask why a matter that has twice been suspended over a death that took place over four years ago where the woman got what she wanted, is suddenly before the media and the courts?

If that were not enough for conspiracy theorists, the lawyer for the woman’s family, Sylvie Tack, has a longstanding professional relationship with Belgium’s euthanasia supremo, Dr Wim Distelmans, and his Life Ending Information Network (LEIF) as a lecturer, speaker and member of their peer review panel.

It may be that Archbishop De Kesel was aware of this pending case when he made his pre-Christmas declaration. If so, full marks to him! As we observed earlier, it seems likely now that the courts may well determine the interpretation of Article 14 of Belgium’s euthanasia law.

It does not seem likely that the complaint by the woman’s family is principally about her treatment or any recompense or restitution for “suffering or loss”. As their lawyer told De Morgen: "The new Act states that doctors and staff who are involved in the euthanasia, can have conscientious objection. But the health care institution itself should not interfere with it themselves."

Make no mistake: if ever there was going to be a test case, this is it. Rightly or wrongly, Belgian’s euthanasia supremos have always seen the Catholic Church and its influence as the last bulwark standing against them. I have heard them say as much personally. Perhaps, ironically, they also see Catholicism as the last voice of conscience – to which they clearly object.

Paul Russell is director of HOPE: preventing euthanasia & assisted suicide, which is based in Australia. This article has been republished from his blog with permission.
- See more at: http://www.mercatornet.com/careful/view/catholic-archbishop-forces-showdown-over-belgian-euthanasia-law/17390#sthash.90UQiSWV.dpuf

Happy New Year! We are slowly coming to grips with the idea that the Christmas holiday is over. We will be bringing you lots of great reading throughout the year. Make it one of your New Year's resolutions to introduce five friends to MercatorNet. We hope that 2016 will be a year of expansion!