MercatorNet: Can Britain win its battle of ideas? || MercatorNet

Can Britain win its battle of ideas?

The Prime Minister is determined to prove the superiority of British values to young Muslims. 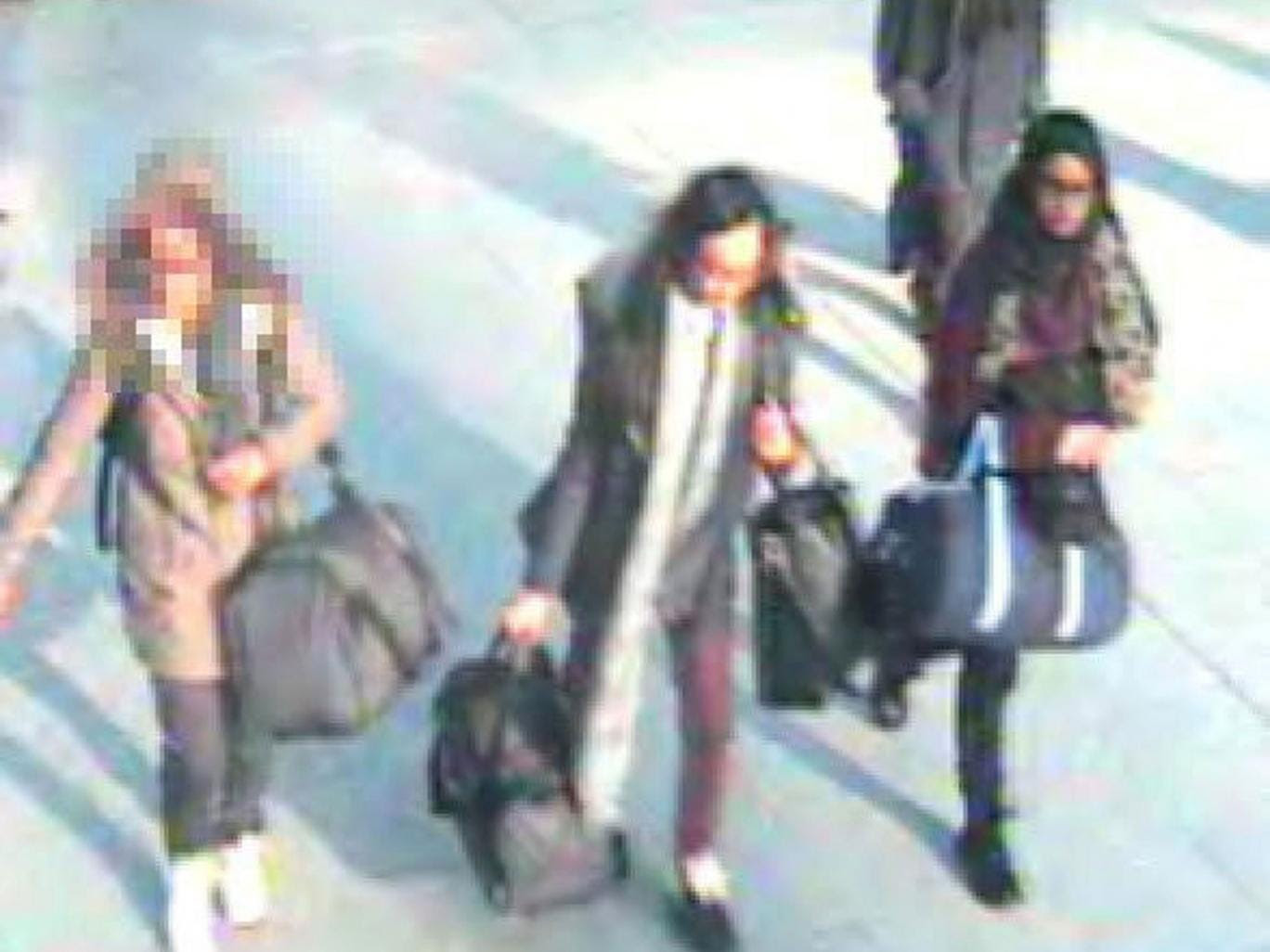 Khadiza Sultana (16), Amira Abase (15) and Shamima Begum (15) at Gattwick Airport on their way to Syria.
Possibly no other country in the Western world has invested more than Britain in fighting the appeal of Islamic extremism. Last October the government launched a Counter-Extremism Strategy with great determination. Prime Minister David Cameron described the fight against “this poisonous ideology” as “one of the great struggles of our generation”.


“Do we close our eyes, put our kid gloves on and just hope that our values will somehow endure in the end? Or do we get out there and make the case for those values, defend them with all that we’ve got and resolve to win the battle of ideas all over again?”

And Cameron insisted that the day of politically correct tiptoeing around the issue was over. His government is taking the gloves off:


“In the past, I believe governments made the wrong choice. Whether in the face of Islamist or neo-Nazi extremism, we were too tolerant of intolerance, too afraid to cause offence. We seemed to lack the strength and resolve to stand up for what is right, even when the damage being done by extremists was all too clear.”

Gutsy stuff: tough, straight, muscular, hard-headed.
Just one problem: if there is going to be a battle of ideas, are the British government's in working order? “Our strongest weapon [is] our own liberal values,” the Prime Minister said in a speech last July. He defined these as follows:


“We are all British. We respect democracy and the rule of law. We believe in freedom of speech, freedom of the press, freedom of worship, equal rights regardless of race, sex, sexuality or faith.”

But are these ideas which capture the imagination and idealism of young people? Democracy and the rule of law are the hard-won glories of Western culture, but they don’t appeal to the existential passions of young people trying to shape a meaning for their lives. ISIS recruits are being promised suffering, sacrifice and eternal glory. To them Cameron’s words must sound like the huffing and puffing of a latter-day Colonel Blimp. Think of the three teenaged girls from London who slipped away to join ISIS in Syria. Their romantic idealism probably has more in common with Romeo and Juliet than Katniss Everdeen.
The government insists that it is not meddling with the beliefs of “faith communities”. But it is. It is trying to persuade religious people that the highest value of their own faith is tolerance of other people’s faith commitments. But tolerance is fundamentally a Christian value. Christianity teaches respect for persons and their freedom whose political embodiment is tolerance and democracy.
The problem is that Christianity has been on the skids in Britain for generations. As the Church of England’s authority crumbled, its place was taken by a pragmatic civic religion, British-ness.
Nothing illustrates this better than Flowering Wilderness, a novel published by John Galsworthy in 1932, the year he won the Nobel Prize for Literature. Galsworthy is best known for The Forsythe Saga, a loosely connected series of novels which observed upper middle-class British society before and after the Great War, a time of huge social and moral change.
In Flowering Wilderness, a cynical young poet, Wilfrid Desert, scandalises upper-crust London society when he admits that he had converted to Islam. It turns out that he did so only because he had been captured by Islamic fanatics in the Sudan and was offered a choice between submission or death. But desperation was no excuse. His fiancée, Dinny Cherrell, discovers that her family cannot forgive him for betraying, not his religion, but his British heritage. Her father, a general, tells her with dismay:


“Is the religion of one's fathers for hundreds of years to go for nothing, then? Is all that has made us the proudest people in the world to be chucked away at the bidding of an Arab? Have men like the Lawrences, John Nicholson, Chamberlayne, Sandeman, a thousand others, who spent and gave their lives to build up an idea of the English as brave men and true, to be knocked into a cocked hat by every Englishman who's threatened with a pistol?"

It turns out that none of the characters in the novel believes in anything loftier than the Union Jack. One of Dinny’s uncles is an Anglican clergyman who cannot even imagine what it means to have faith in his own religion:


“I serve an idea, with a superstructure which doesn't bear examination.' [he muses]. Still, the good of mankind was worth working for! A doctor did it in the midst of humbug and ceremony. A statesman, though he knew that democracy, which made him a statesman, was ignorance personified. One used forms in which one didn't believe, and even exhorted others to believe in them. Life was a practical matter of compromise.”

The novel is set in about 1930, but the Church of John Bull had been established long before that. Several characters in the novel cite a cloyingly patriotic poem, “Theology in Extremis” by the minor Victorian poet Alfred Comyn Lyall. This is a monologue by a British soldier captured by Muslims during the 1857 Indian Rebellion and offered the same choice as Wilfrid.
Why not convert, the captive asks himself: he doesn’t believe in any of this Christian humbug anyway. But he stands his ground: “Yet for the honour of English race, / May I not live or endure disgrace.”
Writing a couple of generations later, Galsworthy depicts all commitments as absurd, including patriotism. His hero’s poem is a hymn to nihilism which would do Richard Dawkins proud:


'Into foul ditch each dogma leads.
Cursed be superstitious creeds,
In every driven mind the weeds!
There's but one liquor for the sane--
Drink deep! Let scepticism reign
And its astringence clear the brain!'

(Sorry about that – Galsworthy was a novelist, not a poet.)
Not a lot seems to have changed since 1932, when Flowering Wilderness was published. The Prime Minister is still burbling about British-ness and the British establishment has abjured its Christian roots. Are they capable of grasping the desire for commitment and transcendence which stir the hearts of young Muslims? Will they be able to persuade troubled minds that John Bull is more than just bull? Probably not: Christians who have lost their own faith can hardly help Muslims discover theirs.
Michael Cook is editor of MercatorNet
- See more at: http://www.mercatornet.com/articles/view/can-britain-win-its-battle-of-ideas/17423#sthash.RMNGeiSq.dpuf

Attacks on women on New Year's Eve in Cologne appear to have been far more numerous and serious than German authorities first admitted. The first police statement was: "relaxed atmosphere. Celebrations largely peaceful". Far from it. Now more than 500 complaints have been filed, about 200 over sexual assault. Initially police barely mentioned asylum seekers; later on it emerged that most of the attackers were migrants.
The biggest casualty of this terrible incident is trust in Germany's politicians. Last year Angela Merkel was Person of the Year for Time magazine. Now her position looks a bit shaky. Voters gambled that her government would handle the influx in an orderly fashion. If they believe that they lost, there could be a huge backlash, even a violent one. We have applauded Germany's generous migration policy -- but its authorities have to tell the truth about the speed bumps.