MercatorNet: Adventures in the Book Pages

MercatorNet: Adventures in the Book Pages

Adventures in the Book Pages

A wise and entertaining collection of book reviews and essays.
- See more at: http://www.mercatornet.com/articles/view/adventures-in-the-book-pages/17449#sthash.RKDIIi8f.dpuf 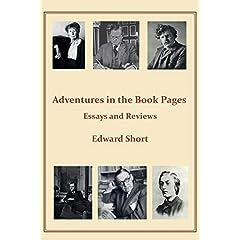 
What is the point of book reviewing? I often ask myself this question. Now, having read this stimulating collection of essays and book reviews by the American Newman scholar, Edward Short, I have found my answer. Reviewing is not about showing off one’s erudition; nor is it about trumpeting the zeitgeist. It is about sharing one’s deepest values through a critical assessment of the work of another. For a religious reviewer, particularly when discussing a writer’s moral or religious standpoint, these discriminations will always include one’s faith as a point of reference – not to preach or moralise but to arrive at a more thoughtful understanding of the strengths and weaknesses of the writer in question.
Short calls this collection “Adventures” because to experience new insights about familiar authors or to make new friends through reading is one of the greatest pleasures of the mind. Because he is at home in the world of books and ideas as well as recognising his faith as foundational, you feel you can trust his judgements and assessments. For instance, reviewing Arthur Kirsch’s “Auden and Christianity”, he notes the undercurrent of sympathy for Christian belief behind the poet’s work, adding that as an indirect consequence, “He was never comfortable with what might be called the Fire Island side of his being” (i.e. his homosexuality).
Again, discussing the poetry of GM Hopkins, often “trotted out as an example of the gifted artist hobbled by a repressive faith”, Short rejects the idea that for Hopkins his faith was a kind of “voluntary straitjacket”, writing “Of course the Faith did try Hopkins – it tries souls to remake them – but that it barred him from becoming a freer, happier, better poet is not tenable...The Ignatian discipline of the Society of Jesus gave Hopkins all the spiritual grist that his poetic mill could require.”
Reviewing the Letters of Graham Greene provides Short with the opportunity to discuss his novels, listing the best as Brighton Rock, The Power and the Glory, The Heart of the Matter and The End of the Affair – all of which treat Catholic themes and where “moral failure takes centre stage.” To those who think Greene’s Catholic faith was merely a useful pose, utilised for his art, the reviewer neatly sums up the more accurate insight: “He professed the reality of the Faith but chose not to practise it.”
Naturally enough, as a bookman, Short has his favourite authors about whom he writes with sympathy and knowledge: these include Newman, Shakespeare and Dr Johnson. He is also warm about the writings of Penelope Fitzgerald, GK Chesterton and TS Eliot, among others. Reviewing Craig Raine’s book on Eliot, Short rightly takes exception to Raine’s view that Eliot was wrong to believe that “genuine poetry can communicate before it is understood.” He comments perceptively that “Understanding, like the knowledge it attempts to acquire, is a matter of degrees...Not knowing a thing, after all, finding it mystifying, finding it intriguing but baffling is often as much a part of understanding as knowing a thing. We know that we do not know.”
Readers will find the essay on “Winston Churchill and the Old Cause”, which treats of Churchill and Christianity, witty and generous. Short understands Churchill’s greatness despite his many and obvious flaws, concluding with the reflection that he is “a reminder of the insufficiency of natural virtue...The virtues of the natural man, even the most extraordinary natural man, are poor things without sanctifying grace.”
One of the merits of reading a book like this is that such is the liveliness and energy of the writing that it prompts one to want to read some of the books under scrutiny, such as “An Anglo-Prussian Self-Portrait: the Memoirs of Charles Arnold-Baker”. Short includes a wonderful quote from Arnold-Baker (the son of a Prussian aristocrat who fled Germany when the Nazis came to power): “I am hostile to those who despise patriotism. You might as well despise your own family or your elephant.” Arnold-Baker’s tribute to CS Lewis, his Oxford tutor, which Short quotes with approval, is also worth recording: “Nothing submerged that buoyant intelligence. His Christianity had something to do with this: a religious person, knowing his own insignificance, can be genial. An atheist sneers.”
My small caveat at this fine collection is that I think it would have been better to separate the essays from the reviews into two distinct sections. I also think that some culling of the material included might have been worthwhile. Entertaining though Short is about the very rich American, Andrew Mellon, or on the court case surrounding the paternity of the “Russell baby”, I am not sure they add much to the whole. There are also occasional unnecessary splenetic asides as when he describes American universities as “seminaries of self-loathing and grievance”.
Yet these strictures hardly detract from this volume’s many wise appreciations and assessments, written in prose that is both exact and illuminating, such as Short’s vivid description of Dr Johnson’s “unhappy upbringing in the household of a bankrupt bookseller and his aggrieved, termagant wife.”
Francis Phillips writes from Buckinghamshire in the UK.
- See more at: http://www.mercatornet.com/articles/view/adventures-in-the-book-pages/17449#sthash.RKDIIi8f.dpuf
Publicado por salud equitativa en 5:05