MercatorNet: “People should live peacefully together”

MercatorNet: “People should live peacefully together”

“People should live peacefully together”

How a Muslim teacher protected Christians from terrorists and paid the ultimate price. 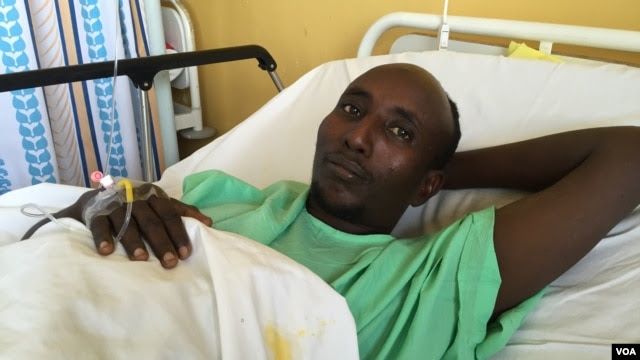 Salah Farah in his hospital bed (Voice of America)
News of Islamic terrorism never seems to leave the front page. This week Taliban suicide fighters slaughtered about 20 students randomly at a university in Pakistan; a suicide bomber in Kabul killed seven; and a 1400-year old Christian monastery in Iraq was obliterated by ISIS.

But it would be quite false to think that all Muslims endorse these atrocities. Some live up to the oft-quoted verse from the Qur’an: “if anyone saves a life, it shall be as though he had saved the lives of all mankind” (Surah 5, verse 32).

Such was Salah Farah, a 40-year-old Kenyan Muslim and a father of five children who died on Sunday evening at Kenyatta National Hospital in Nairobi.

Farah was deputy headmaster at Mandera County Primary School in northern Kenya. On December 21 he was on a commuter bus on his way back from classes in Nairobi. At about 7am four terrorists from Al-Shabaab, a Somali group allied to al-Qaeda, sprang an ambush. The bus stopped.

The 60 passengers all knew what was going to happen next. In 2014 terrorists stopped another bus in the same region, divided the passengers by religion, and shot dead 28 non-Muslims.

But not this time.

The militants ordered the passengers off. “The women who were Muslims started removing their hijabs and lesos [decorative scarves] and handing them to the non-Muslims,” Farah recalled.

They were ordered into a field.

"We were told to separate — the Christians, this side, the Muslims, this side," Farah said. But Farah and the others refused. "We asked them to kill all of us or leave us alone. As we argued, they shot me.” He was hit by two bullets, one in his hip and the other in his abdomen. Three other men were shot as well; two died. But amazingly, the terrorists left without executing their plan.

The intransigence of the Muslims had saved the lives of the Christians on the bus.

Farah was airlifted to Nairobi for an operation and appeared to be recovering well. But a month later he succumbed to complications from his wounds. He paid the ultimate price for his courage.

Farah's brother Rashid said the death ought to encourage Kenyans to live as one community. "He was responding well to treatment. On Sunday, the situation worsened and was in deep pain,” he said. “But Inna lillahi wa inna ilayhi raji'un (to Allah we belong and to him we return)".

Michael Cook is editor of MercatorNet.

You can find heroism in the most unexpected places. Today we are running an article about a hero from Kenya who paid with his life to protect the people around him from al-Shabaab terrorists. That is noble enough, but he was a Muslim and his courage saved the lives of a number of Christians. See below.