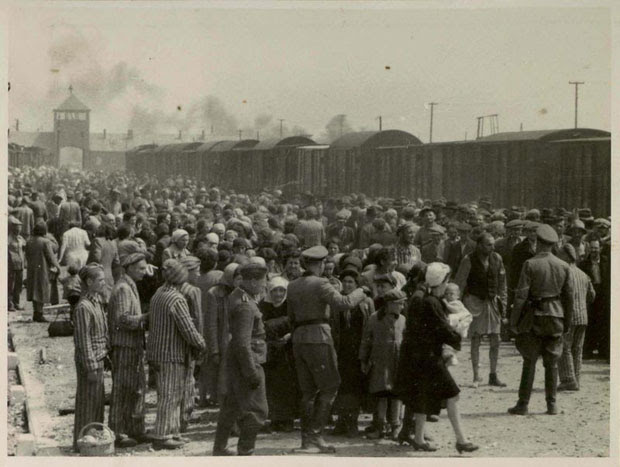 Arrival of Hungarian Jews at Auschwitz-Birkenau in 1944
Whether doctors who have a conscientious objection to abortion or euthanasia have an obligation to refer patients to a more cooperative doctor is a hotly debated topic in Canada and the US.

The College of Physicians and Surgeons of Ontario, for instance,  strongly supports "effective referral" for euthanasia. This approach is unacceptable to conscientious objectors because they believe that it makes them complicit in homicide and suicide.

Often those opposed to the notion of conscientious objection give the impression that they feel that refusing to refer is absurd, because the healthcare worker is not going to have direct involvement in the action.

However, the trial of a 95-year-old former healthcare worker at Auschwitz might make the position of conscientious objectors a bit more plausible.

SS sergeant Hubert Z. (his surname is being withheld because of Germany's privacy laws), was employed at Auschwitz from October 1943 to January 1944 and worked as a paramedic there for one month, from August 15 to September 14, 1944.

During that month, 14 trains transporting Jews from all over Europe, including the teenage diarist Anne Frank, arrived and their passengers were sent to the gas chambers. Mr Z. did not participate in the killings. However, according to a report in the Sydney Morning Herald, “the prosecution's office holds that he was aware of the camp's function as a facility for mass murder. By joining its organisational structure, he consciously participated and even accelerated the deaths of thousands of people.” He is being charged with complicity in 3,681 deaths.

Last July 94-year-old Oscar Groening, who was dubbed “the bookkeeper of Auschwitz”, was convicted and sentenced to four years in jail, even though he had no direct involvement in the deaths of the camp’s inmates.

Before the conviction of Ukranian-American camp guard John Demjanjuk in 2011, German authorities refrained from prosecuting “cogs in the machine”. Since then, however, several people have been brought to trial. A 91-year-old woman who worked as a radio operator at Auschwitz has been charged with complicity in 260,000 deaths. Her trial will go ahead later this year in the northern city of Kiel if she is found fit.

Perhaps it makes sense for doctors to have misgivings about being complicit in controversial procedures. What is legal now may be condemned in the future and “effective referral” might not be accepted as an excuse. In any case, cooperation in evil is a subtle and complex topic.
- See more at: http://www.bioedge.org/bioethics/the-challenge-of-conscientious-objection/11722#sthash.dpVuqa0n.dpuf