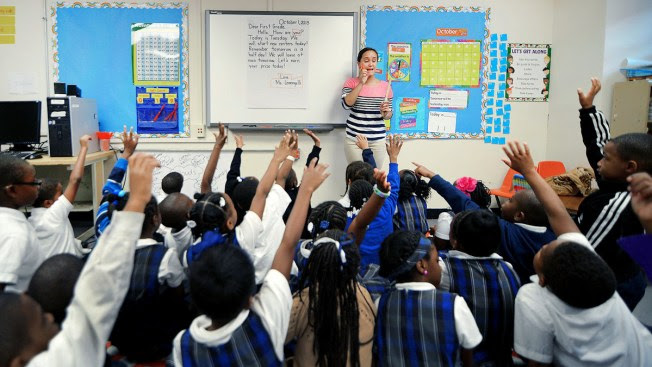 The “inversion of the original meaning of liberty” in Obergefell v. Hodges, observed Justice Clarence Thomas in dissent, “will likely cause collateral damage to other aspects of our constitutional order that protect liberty . . . It appears all but inevitable that [civil and religious marriage] will come into conflict.”

In Obergefell’s aftermath, it is possible that the government will ask religious institutions to choose between retaining their non-profit tax status and retaining their beliefs. But the “collateral damage” will not stop at their sanctuary doors. Many churches, synagogues, and mosques also operate schools, and they will be the next targets. Of the 30,000 private schools in the United States, the Department of Education’s Private School Universe Surveyfound that 68 percent have “a religious orientation or purpose” and that 80 percent of private school students attend such a school. Such religiously affiliated private schools play a key role in the school choice movement—for now.

Obergefell may force private schools to decide between holding fast to their beliefs and maintaining their eligibility for school choice programs. Schools may be forced to close to avoid government scrutiny and interference in their faith. Widespread private school closures will lead to fewer alternatives to public schools. This will hinder the school choice movement, because families may not be able to afford tuition at the remaining private secular schools, even with vouchers or other forms of assistance. A school choice movement with only charter schools and private secular schools will leave the kids and families who most need more educational options with very little choice at all.

In Zelman v. Simmons-Harris, the Supreme Court upheld the constitutionality of an Ohio voucher program that allowed parents to use the aid for tuition at private religious schools. Notably, however, the schools participating in the voucher program agreed not to discriminate on the basis of race, religion, or ethnic background. In other words, there is precedent for states requiring schools participating in such programs to adopt non-discrimination policies.

Unlike the non-discrimination involved in Zelman, however, sexual orientation is not a federally protected class. However, some states prohibit sexual orientation discrimination in employment, public accommodation, and in other matters. States could therefore condition a private school’s participation in a voucher program on their agreement not to discriminate on the basis of sexual orientation. This could be a difficult proposition for the school if the religious institution with which it is affiliated believes that marriage is the union of husband and wife.

Other precedents also pose problems. Bob Jones University v. United States (1983) established that the IRS can revoke a religious university’s tax-exempt status if a university adopts practices contrary to public policy. In that case, which involved a campus ban on interracial dating, the Court held that the government’s interest in “eradicating racial discrimination in education” outweighed the burden of the university’s loss of its tax-exempt status on the institution’s Free Exercise rights. Justice Kennedy and the liberal justices could also argue that the schools’ refusal to adopt a nondiscrimination policy “disparage[s]” or “demeans” same-sex couples and, as such, adversely impacts the learning environment or perpetuates beliefs antithetical to acceptance of “marriage equality.” The Court’s creative streak seems to imperil a private religious school’s non-profit tax status under a Bob Jones University-style analysis.

The Religious Freedom Restoration Act (RFRA) might give private religious schools a defense if such schools meet the definition of “person” under RFRA—a likely application in light of the Hobby Lobby decision. Under RFRA, the government “shall not substantially burden a person’s exercise of religion even if the burden results from a rule of general applicability” unless the government “demonstrates that application of the burden to the person—(1) is in furtherance of a compelling governmental interest; and (2) is the least restrictive means of furthering that compelling governmental interest.” RFRA covers “any exercise of religion, whether or not compelled by, or central to, a system of religious belief.”

A state restriction prohibiting a private school’s participation in a voucher or other school choice program based on the school’s adherence to a belief that marriage is a male-female union may substantially burden the school’s exercise of religion, because it would interfere with the school’s religious mission to instruct youth in their faith and to help poor and disadvantaged students obtain a quality education. Private religious schools may face the choice Catholic adoption agencies confronted: compromise their beliefs by complying with the state’s mandated “tolerance,” or close to preserve their beliefs.

In Obergefell’s aftermath, the government could argue that its “compelling interest” rests in eradicating discrimination based upon sexual orientation. This interest would compel the state to prohibit offending private religious schools from participating in taxpayer-financed school choice programs to prevent the perpetuation of (alleged) discrimination. It is unclear what weight the courts will accord these interests given the absence of a standard of scrutiny, but theObergefell ruling suggests that the current Court will see expediting broader acceptance of same-sex marriage and eradicating animus toward gays as a legitimate and compelling government interest.

However, it will be a challenge for the government to meet its burden under the “least restrictive means” prong. Prohibiting private religious schools associated with pro-conjugal marriage religious institutions closes the doorway to school choice programs completely for those institutions. In the face of the government’s “incentive,” private religious schools will either have to fundraise or limit the number of applicants to continue operations. Such state actions are not incentives but directives that empower the state and reduce civil society.

There is another, potentially stronger path to preserve the participation of private religious schools in the school choice movement. The so-called “family autonomy cases,” which predate RFRA, could remove or mitigate the threat restrictions upon vouchers and other forms of aid pose to private schools.

In Meyer v. Nebraska (1923), the Supreme Court held that the liberty interest protected by the Constitution included parental rights in raising children and the “corresponding . . . natural duty of the parent to give his children education suitable to their station in life.” The Court used this reasoning to strike down a Nebraska law that prohibited the teaching of any subject in any language other than English “in any private, denominational, parochial or public school” because the law, coupled with Nebraska’s compulsory education law, violated the principle that the state cannot interfere with a liberty interest “under the guise of protecting the public interest, by legislative action which is arbitrary or without reasonable relation to some purpose within the competency of the state to effect.”

The Court applied the Meyer framework two years later in Pierce v. Society of the Sisters of the Holy Names of Jesus & Mary, a dispute concerning an Oregon statute that required parents or guardians of children between eight and sixteen years old to send them “to a public school for the period of time a public school shall be held during the current year” in the school district in which the child resided. Violation of the statute subjected parents to a misdemeanor prosecution. The Court, citing Meyer, found that the Oregon compulsory education statute “unreasonably interfere[ed] with the liberty of parents and guardians to direct the upbringing and education of children under their control.”

Meyer and Pierce, taken together, stand for the proposition that parents have a fundamental right to direct the education of their children, which includes the right to choose to enroll their children in private religious schools. Parents could invoke the Meyer-Pierce case law to challenge conditions placed on voucher eligibility on the grounds that they infringe the parents’ right to direct the education of their children. Parents could argue that the increased conditions and restrictions would induce many private religious schools to close rather than compromise their beliefs. This would reduce the number of private religious school options through which the parents could exercise their rights regarding the education of their children. In urban centers, the closure of a private school—or its decision not to participate in school choice programs—could leave failing public schools as their only option.

The fundamental rights established in Meyer and Pierce and upheld across the decades provide parents a stronger constitutional claim than that of private religious schools to protection under RFRA. The outcome of any litigation, however, rests on whether Justice Kennedy divines that parents and schools are focused on education with sincerely held beliefs at the endeavor’s core, or concludes that that core “disparage[s]” or “demeans” another segment of the population. Given Justice Kennedy’s record on gay rights litigation, this outcome is not promising for either parents or private schools.

Although parents can draw on the Meyer-Pierce line of cases to challenge the constitutionality of conditions or restrictions on vouchers or school choice, their odds of success remain uncertain in light of Justice Kennedy’s capriciousness. This treacherous litigation landscape justifies legislative action to help protect private schools.

State and federal legislators should push for legislation that prevents the government from requiring schools to adopt sexual orientation nondiscrimination policies in order to be eligible for voucher, tax credit/deductions, or educational savings account programs. The First Amendment Defense Act is a good start in addressing the threat to religious liberty and conscience rights at the federal level. States need similar policies, especially targeted to protect educational freedom. School choice advocates, irrespective of their position on same-sex marriage, should unite to preserve the religious liberty of private schools.

In an age when faith is viewed with scorn and traditional views on cultural issues are seen as “hate,” passing legislation and advancing these ideas will not be an easy task. But this is a fight worth waging. We must protect constitutional rights, preserve sincerely held beliefs from the tyranny of the majority, and save quality educational opportunities for generations of children. By continuing the fight, school choice advocates can prevent any further “inversion of the original meaning of liberty” and spare students and parents from becoming “collateral damage” in the tide of cultural decay.

Nathan Swanson is a Minnesota attorney. The views expressed here are his own and do not necessarily reflect the views of his employer or of any organizations with which he is associated. This article has been republished from Public Discourse
- See more at: http://www.mercatornet.com/conjugality/view/collateral-damage-same-sex-marriage-private-religious-schools-and-parental/17474#sthash.AnmBYzdA.dpuf