The Movement Fighting Inequality is Growing

Print | Send by email
Jenny Ricks is the global convenor of the Fight Inequality Alliance. 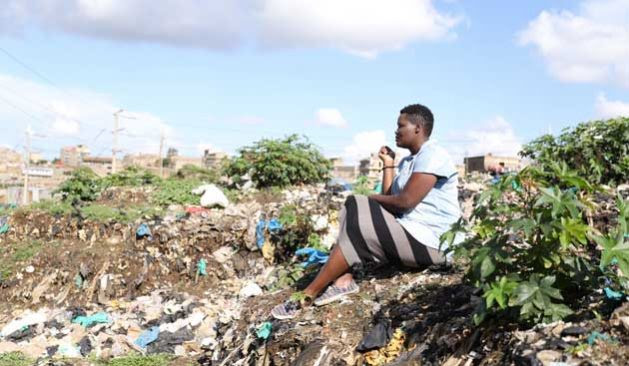 Eva sitting near the Dandora dumpsite. Credit: Joy Obuya / Fight Inequality Alliance
JOHANNESBURG, Dec 20 2018 (IPS) - The world’s political and economic elites, that will once again gather at the Swiss mountain resort of Davos for the annual World Economic Forum (WEF) 22-25 January, have become all too predictable. It’s not difficult to predict what they will say, because they always say what’s in their interests.
They will again say that they understand why people in so many parts of the world are angry about inequality and once again they will promise to fix the enormous gap between the elite few and the rest of us. But they will not fix the inequality crisis because inequality isn’t a flaw in the system, it’s in the design, and those at the top intend to keep it that way.
But what history has taught us is that all major equalising change, from fighting against slavery to fighting for women’s rights, comes about when people outside the elites organize and challenge those in power.
The solutions to tackling inequality therefore rests instead with a very different group of people from those in Davos, those who will be holding protests and events on mountains of a very different sort – the mountains of garbage and of open pit mines that millions of the world’s people call home.
And the number is growing. In cities from Manila to Guadalajara, ordinary people will mobilise and gather in their thousands to demand and present solutions to rising inequality. They are demanding an end to the age of greed that has seen extreme wealth and power skyrocket to epidemic proportions.
Tackling inequality will take a step forward during that week, but it will happen because people are not waiting for answers, they are organising for change – in spite of Davos, not because of it.
Their solutions will include jobs, minimum living wages, decent public services, fair taxes, land rights for women and much more.
The people leading the change are part of an emerging global grassroots movement, the Fight Inequality Alliance, that aims to counter the excessive concentration of power and wealth in the hands of elites, and advance a more just, equal and sustainable world. 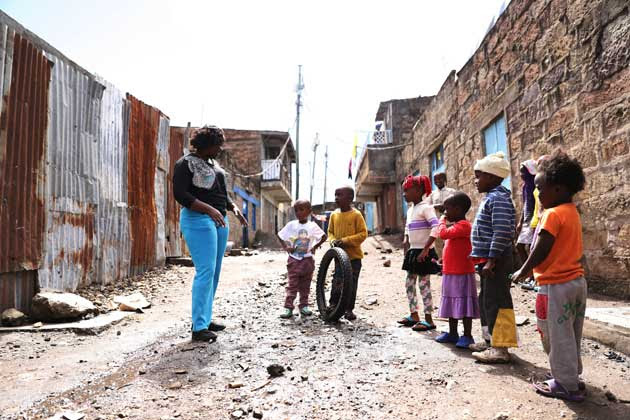 Beth speaking with children on the streets of Dandora, Nairobi. Credit: Joy Obuya / Fight Inequality Alliance
The alliance unites social movements, environmental groups, women’s rights groups, trade unions and NGOs across the world.
In Mexico, the city of Guadalajara will host a walk called ‘From el Colli to Davos’. It starts from a hill where rural and indigenous migrants settle informally, expelled from the city and deprived of opportunities and services for a better life. It will culminate with a number of cultural activities, including a hip-hop and art contest and gathering people’s demands for change.
Speaking from Guadalajara, Fight Inequality campaigner Hector Castanon says: “Guadalajara has the second richest municipality in Mexico and is home to Central American migrants and displaced rural and indigenous communities that have left everything behind due to a lack of opportunities and organised crime.
Salaries are under the poverty line, there is limited access to basic resources, poor public services and high crime rates. All of this has moved people to organise to solve their needs and exercise their rights.”
In Zambia, there will be a festival in Shang’ombo, one of the poorest and most neglected districts of Zambia. The festival will highlight how politicians and elites make promises here during election campaigns and then forget the people, as well as people’s stories of inequality and their solutions.
It will feature music stars Petersen Zagaze, BFlow and Maiko Zulu. In explaining why she will be part of the event, Zambian youth activist, Mzezeti Mwanza, says that despite the country’s natural resources, the majority of Zambians live below the poverty line and that “none of us are equal until all of us are equal”.
In Kenya, Dandora slum in Nairobi will play host to the Usawa Festival (or Equality Festival), where hip hop star Juliani will perform, and alliance members will create a space for people to bring forward their solutions to inequality.
Njoki Njehu, Africa Co-ordinator for Fight Inequality said, “Kenyans living the realities of inequality are organising together – rural and urban, young and old, women and men. We understand the problems and have concrete proposals to end inequality. The solutions start with us. We have the answers.”
In the Philippines, there’ll be a festival between two adjoining communities, Baseco and Parola in Manila, that contrast starkly with the high-rise landscape of the city centre. Through music, cultural activities and discussion, people will raise their experiences of inequality and their demands for change.
The Fight Inequality Alliance’s third global week of action, takes place from 18-25 January 2019, with events like these in more than thirty countries across the globe. For solutions to inequality, adjust your gaze from Davos to the other mountains.
Follow the alliance on Twitter at https://twitter.com/FightInequalit1