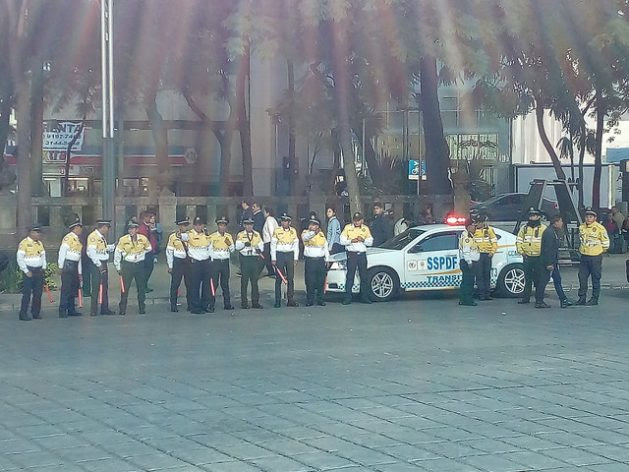 Police stand guard at one of the many protests taking place in Mexico City. In his security plan, which has drawn criticism, left-wing president-elect Andrés Manuel López Obrador includes the creation of a National Guard - a militarised police force roundly opposed by victims of violence and human rights organizations. Credit: Emilio Godoy/IPS
MEXICO CITY, Nov 28 2018 (IPS) - “Setback” and “disillusionment” were the terms used by Yolanda Morán, a mother whose son was the victim of forced disappearance, to describe the security plan outlined by Mexican president-elect Andrés Manuel López Obrador, who takes office on Dec. 1.
“We are not convinced, because we believed it when he said in the campaign that he was going to send the military back to their barracks. We thought he was going to change the strategy, which has already been used for two six-year presidential terms and has not yielded results,” said Morán, founder of the non-governmental United Forces for Our Disappeared.
She told IPS that “we believed that he would have a different strategy, giving the police better training, and not continuing with the military on the streets,” explaining her organisation’s disappointment with the plan of leftist leader López Obrador, popularly known in the country by his initials, AMLO.
"Civil society would like to hear that the army is gradually withdrawing from the streets and that there is a plan to strengthen civilian police, who have not been trained at the municipal level. Instead, an army that has been on the streets for 12 years has been strengthened, with terrible results." -- Tania Reneaum

Morán’s son, Dan Fernández, who would now be 43, disappeared in December 2008 at the hands of the military, which has been documented, in the northern city of Torreón. As a result, Morán was forced to leave town and seek refuge in the central city of Guanajuato. She has relentlessly sought to find out what happened to Dan, along with other people searching for their missing loved ones.
The activist said she still “hopes things will change” when López Obrador, the leader of the National Regeneration Movement(MORENA), takes office. But “we see things that indicate that this was not what he promised us. It is not the way to restore peace. His plan will not solve the problems.”
“We have no confidence in the military, perhaps because of a handful who are dishonest, or murderers, we blame an entire institution. But they’ve earned it,” said Morán, who is also a leader of the Movement for Our Disappeared in Mexico, which groups more than 70 collectives and organisations focusing on the issue of forced disappearances.
There is broad opposition to López Obrador’s strategy to pacify a country plagued by criminal violence, among other reasons because it would continue to grant a strong role to the military, contrary to his campaign pledge take the troops off the street and send them back to the barracks.
The criticism by civil society focuses on the militarisation of the country, the subordination of civilian institutions, the subjugation of the administration of justice and its ineffectiveness in resolving the human rights crisis that plagues this Latin American nation of 129 million inhabitants.
On Nov. 15, López Obrador presented the National Peace and Security Plan 2018-2024, which would merge the Military, Naval and Federal police into a single force, the National Guard (GN), to which members of the armed forces would be added.
The plan requires a constitutional amendment to create the NG – which will have between 120,000 and 150,000 troops – and its central aims are eradicating corruption and reviving the pursuit of justice; guaranteeing employment, education, health and welfare; full respect for and promotion of human rights; reformulating the fight against drugs; and public security, national security and peace. 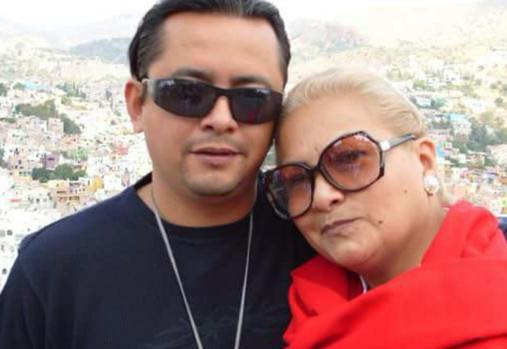 Yolanda Morán, with her son Dan Fernández, before he disappeared after he was seized by a military intelligence group in December 2008. Credit: Courtesy of Yolanda Morán
In a paper released on Nov. 22, the non-governmental National Citizen Observatory criticised the strategy as “ambiguous, confusing, centralising, and nonviable,” and said it lacks a clear diagnosis of the problem and ignores the recommendations of civil society.
“The plan doesn’t indicate where it’s headed and leaves more questions than answers. The National Guard lacks a plan. It includes aspects that no one knows whether or not they will work. It can lead to a public policy that is difficult to evaluate,” the Observatory’s director, Francisco Rivas, told IPS.
The military has been involved in public security in Mexico since December 2006, when the then brand-new president, conservative Felipe Calderón, began his six-year term involving the army in what he called the war against drug cartels, which control different parts of the country.
There are now some 50,000 soldiers deployed around the country in this campaign, which exacerbated the levels of violence, especially killings, enforced disappearances and torture, according to local human rights organisations and United Nations agencies.
According to official figures, between January and September there were 37,311 homicides, of which 24,769 were premeditated murders, higher than the 20,833 reported in the same period in 2017.
To this macabre statistic are added the more than 37,000 people forcibly disappeared since 2007, according to data from the National Commission for the Search for Disappeared Persons – an unprecedented figure for a nation that is not suffering from internal armed conflict.
Mexico’s human rights crisis has become the most severe in Latin America, a region that has improved in the fight against impunity over the past two decades.
Tania Reneaum, executive director of human rights watchdog Amnesty International in Mexico, expressed surprise at AMLO’s announcement.
“Civil society would like to hear that the army is gradually withdrawing from the streets and that there is a plan to strengthen civilian police, who have not been trained at the municipal level. Instead, an army that has been on the streets for 12 years has been strengthened, with terrible results,” she told IPS.
According to Reneaum, it is “disconcerting” that the next president made an effort to approach civil society and the victims of violence, and then turned around and presented a “militaristic” initiative.
“We don’t understand what happened, how things went from that dialogue to creating a police force of this nature. He is not taking into consideration the pain and experience of the victims of state violence, who told him that the pain comes from the military troops,” she said.
Human rights defenders and academics had won a battle on Nov. 15, when the Supreme Court revoked as unconstitutional the Internal Security Law, promulgated by the outgoing government of conservative Enrique Peña Nieto in December 2017.
This legislation gave broad powers to the armed forces in public security tasks, such as indiscriminate surveillance and arrests.
But their satisfaction evaporated with the plan announced the same day by AMLO, which has created a gap with human rights activists, who are victims themselves of criminal and state violence.
The plan ignored the promising prior consultations held between August and October, when the president-elect’s team organised at least 18 peace and reconciliation forums and 25 on-line consultations to listen to the priorities of groups harmed by violence and incorporate their proposals into the new security and justice strategy.
In October, however, the alarms went off when AMLO’s team decided to cancel the forums in five states, including several of the most violence-stricken.
Following the launch of the plan, Security without War, a collective made up of academics, victims’ relatives, and representatives of some 140 human rights organisations, asked the incoming government to request an advisory opinion from the Inter-American Commission on Human Rights.
The Observatory, for its part, called for the strengthening of civil institutions, the creation of an independent attorney general’s office, the restructuring of financial intelligence to better combat organised crime, and coordinated public policies.
In Reneaum’s view, it waits to be seen what will happen after the new president takes office in December. “We are seeking non-repetition of things that haven’t worked; we want to see that they are doing something. We are going to pressure them to solve this. We’ve had enough,” said the director of Amnesty International in Mexico.
Reneaum warned about the failure of the new strategy. “We will probably be witnessing the same human rights violations, such as enforced disappearances or extrajudicial executions. I wonder what this mixed military-civil police will be like,” she said.
Various United Nations bodies and international institutions have brought Mexico to task in recent years for massive human rights violations. For now, the future government is not planning a shift in direction, according to civil society groups, which are disappointed