Sexual harassment in Spain: How a hashtag inspired 150,000 women to break the silence on sexual abuse | In English | EL PAÍS

Sexual harassment in Spain: How a hashtag inspired 150,000 women to break the silence on sexual abuse | In English | EL PAÍS

How a hashtag inspired 150,000 women to break the silence on sexual abuse 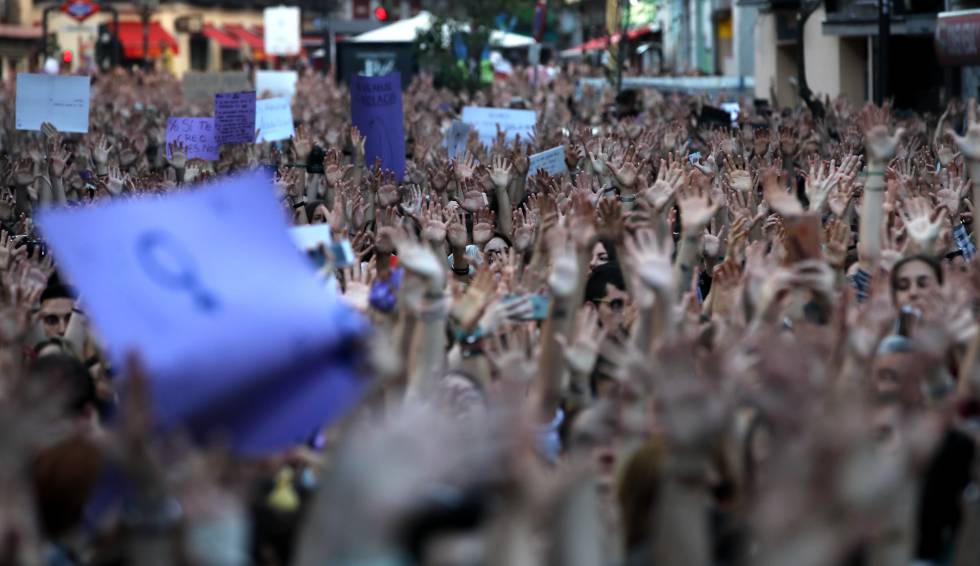 Protest against the La Manada verdict. SAMUEL SÁNCHEZ
When Paula was very little, her father used to sneak into her room in the middle of the night. On the phone, she explains how he would pull the quilt off her – something that today continues to bring back terrible memories.

Who would dare think that hundreds of thousands of stories have been invented?

JOURNALIST CRISTINA FALLARÁS
On April 27 at 9.06pm, she used 219 characters to share the experience on Twitter: “I am 32 years old and I wake up scared in the night when the quilt falls off. I felt the same way when I was little. The man who should have loved me the most, used to throw the quilt on the ground and that’s when everything started #cuéntalo [tell your story].”
This hashtag, which went viral in a matter of hours, inspired Paula and hundreds of thousands of other women to break their silence on sexual abuse. “Saying it in such an open way was cathartic,” says Paula. “Difficult, but cathartic.”
Paula was one of the 790,000 people – the majority of them women – who wrote almost three million tweets between April 26 and May 9. The phenomenon reached Latin America. More than 50,000 of the messages were written in first and second person: they spoke of murder (9.8%), rape (14%), sexual assault (28%), abuse (15.7%), harassment (35.5%), as well as the fear of going out at night, walking alone or getting home late (29.5%). There were more than 3,500 stories of rape of women under 18, and more than 1,000 of girls under 12.
These figures are a snapshot of a spontaneous movement that has spread to more than 60 countries – 34% of the tweets were written from Spain, 32% from Argentina, 8% from Colombia and 5% from Chile and Mexico. It’s thanks to a team of 10 analysts at the Barcelona Supercomputing Center (BSC) that the scope of this movement is known in all its detail. On Thursday, the team presented its findings after spending seven months studying the data. The researchers have also created a tool to store the data, which can be consulted and added to, and a webpage with the complete information at Proyecto Cuéntalo.
It all began with La Manada, the name given to the high-profile trial of five men accused of gang raping an 18-year-old woman at the 2016 Running of the Bulls fiestas in Pamplona. On April 26, a court found the men guilty of sexual assault but cleared them of rape, claiming intimidation and violence were not used against the victim. The sentence caused widespread outrage and sparked waves of protests in cities across Spain.
It was this case that compelled the journalist Cristina Fallarás to write the original tweet that launched a movement: “I have started the day proposing we #cuéntalo because I believe almost all of us have suffered some form of sexual assault.”
The #cuéntalo hashtag accounted for 2.6 million retweets, 9,500 retweets with comments, 128,400 original tweets and 22,500 responses
“Believing or not is a conscious act. And neither the men nor the justice system were believing [La Manada victim’s] story. And in part it’s because there is no common story. I decided I had to call on people to tell it,” she explains.
Her message triggered a flood of messages – 2.6 million retweets, 9,500 retweets with comments, 128,400 original tweets and 22,500 responses. The #cuentalo movement drew comparisons to the #MeToo hashtag that was used in the wake of the Harvey Weinstein sexual abuse scandal in Hollywood and those that followed. But Fallarás argues, “it is not like #MeToo because there is no one famous behind it.”
Faced with the “overwhelming” number of responses, the journalist decided it would be “irresponsible” of her to call on women to share their traumas if their testimonies were just going to disappear.
“It was imperative to conserve this information, a flood of messages like this is proof of the irrefutable reality,” she says. These stories included boyfriends who raped their girlfriends when they were drunk, uncles who felt up their nieces during family dinners, fathers who snuck into their daughters’ bedroom, and strangers who accost women in bars, masturbate meters away from teenage girls in the street and corner women late at night.
#cuéntalo It was my father and it started before I can remember. Two, three years old? Younger? I’ve just turned 41 and I went back to therapy a few months ago, because even though I thought I was over it, I’m still not. Chronic depression, anxiety attacks, nightmares… I never had a partner. I feel safe being alone.
As she looked for a way to extract and save these reports of sexual violence, Aniol Maria and Vicenç Ruiz, two archivists from Barcelona, had already recovered each and every one of the tweets. Suddenly a team, including journalist Karma Peiró and Fernando Cucchietti, a quantum physicist and data visualization expert at BSC, were volunteering their time to pull together, classify and clean up the data.
“Who would dare think that hundreds of thousands of stories have been invented? This new collective memory does not depend on patriarchal powers like the courts or the police, where the official statistics come from. This comes directly from the victims, who see social media as a safe and free place to denounce their cases,” says Fallarás.
I’m 42 years old, I’ve seen and been through all kinds of situations and I am still yet to meet a single woman who hasn’t suffered some kind of abuse or assault. None of us have reached adulthood without some kind of mishap or trauma. Are you aware of the scale of this? #Cuéntalo
For her, one of the biggest concerns is the number of cases that go unreported. Authorities in Spain and Europe recognize that official statistics do not reflect the scale of the problem, as only an estimated 20% of women report sexual abuse.
“It is a yawning gap that means that the reality we know is biased, and we have built an idea of violence based on this reality, one that we cannot deny any longer. Not after this. There can no longer be this social, political, or economic lack of interest,” she adds.
English version by Melissa Kitson.
Spanish court upholds nine-year jail sentence for ‘La Manada’ gang
#Cuéntalo: The hashtag women are using to tell their stories of abuse
La Manada ruling sparks fierce debate over definition of sexual violence
Pamplona gang rape victim: “Don’t leave me alone, please”
Publicado por salud equitativa en 5:44