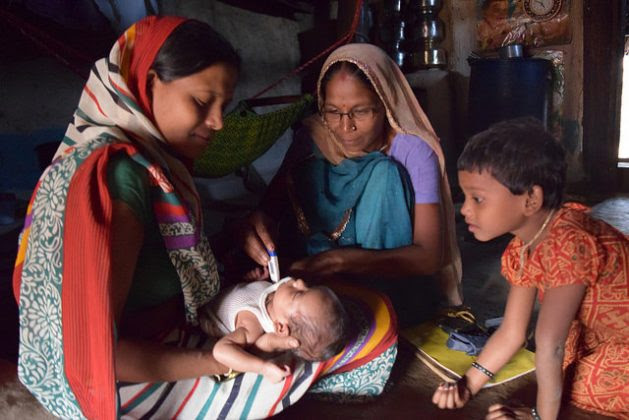 Community health worker Urmila Kasdekar performs a health check on a new born baby in Berdaball village of western India. In India, for example, where it is thought that as many as 120,000 babies alone die every year from sepsis caused by antimicrobial-resistant infections, doctors say two of the key factors behind rising AMR are pharmacies selling antibiotics without a prescription and poor infection control in overcrowded healthcare facilities. Credit: Stella Paul/IPS
BRUSSELS, Dec 4 2018 (IPS) - European Union officials and global health bodies have called for help for poorer countries as growing resistance to antibiotics threatens to become a ‘global health tragedy’ and jeopardises Sustainable Development Goals in some parts of the world.
Antimicrobial resistance (AMR) has risen by as much as two thirds in the last two decades, according to some studies, and is now responsible for an estimated 700,000 deaths annually worldwide.