South-South cooperation – collaboration between developing countries - is a growing and dynamic phenomenon, an important process that is vital in confronting shared challenges. Led by emerging giants India, Brazil and South Africa (IBSA) the South is a tremendous source of tested solutions to development challenges including the Millennium Development Goals (MDGs).The Nairobi Outcome of the 2009 High Level United Nations Conference on South-South Cooperation in Nairobi, Kenya highlights growing political and economic ties within the developing world, as countries from the South assume leading roles in decision-making on hot global issues ranging from economic recovery to food security and climate change. 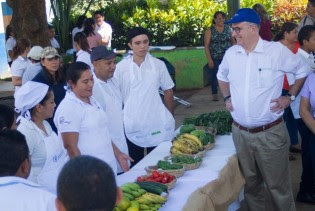 By Edgardo Ayala
Eating healthy and nutritious food in schools in El Salvador is an effort that went from a pilot plan to a well-entrenched programme that has now taken off.

By Edgardo Ayala
Countries in Central America are working to strengthen their regional electricity infrastructure to boost their exchange of electricity generated from renewable sources, which are cheaper and more environmentally friendly.

G77 a Key Partner in Reform of the UN System

By Miroslav Lajčák
When the Charter of Algiers was adopted 50 years ago, it marked the unity of the Group of 77. This unity has not wavered since then.

By Baher Kamal
Investing in youth and the population dividend, women's health, sustainable development objectives, and the key role of parliamentarians to promote transparency, accountability and good governance to achieve the 2030 Agenda on Sustainable Development topped the agenda of a two-day conference of Asian and African lawmakers in New Delhi last week.

By Amina J. Mohammed
Since the turn of the century, much of Africa has achieved impressive economic growth. Sixteen African countries were among the world’s top 30 fastest growing nations. Last year, the 10 fastest growing African economies posted GDP growth rates exceeding 5 per cent.

By Li Yong
Since 2000 the continent of Africa has recorded impressive rates of economic growth. This remarkable performance has been largely driven by the prolonged commodity boom and development assistance. While the continent shows great diversity in the socio-economic trajectories of its countries, growth rates have generally masked an underlying lack of structural transformation, which is needed to achieve socially inclusive and environmentally sustainable development.

By Orlando Milesi
Experts in Latin America warned about the serious risk that would be posed if the fight against hunger, still suffered by 33 million people in the region, is abandoned, while proposing new alternatives and insights which include linking social protection with economic growth.

Alliance to the Rescue of 33 Million Latin American Rural Poor

By Orlando Milesi
“There are 33 million rural dwellers in Latin America who are still living in extreme poverty and can’t afford a good diet, clothes or education, and we are not going to help them move out of poverty if we use the same strategies that worked 20 years ago,” FAO regional representative Julio Berdegué told IPS.

When Policies Speak the Same Language, Africa’s Trade and Investment Will Listen

By Busani Bafana
The rising Maputo-Catembe Bridge is a hard-to-miss addition to Mozambique’s shoreline.

Latin America Discusses How to Make Environmental Rights a Reality

By Daniel Gutman
The final declaration of the Earth Summit held in Rio de Janeiro in 1992 stated that “Environmental issues are best handled with the participation of all concerned citizens.” However, this rarely happens in Latin America and the Caribbean.

By Rafiqul Islam
Experts and policymakers here say regional cooperation is a must to resolve long-standing water problems in South Asian countries like Bangladesh, Bhutan, China, India and Nepal, and to harness the full value of water.

The Greater Caribbean Raises Funds to Protect its Sandy Coasts

By Ivet González
Almost no Caribbean beach escapes erosion, a problem that scientific sources describe as extensive and irreversible in these ecosystems of high economic interest, that work as protective barriers for life inland.

By Mario Osava
“I am going back to Panama with many ideas,” said Gilda Montenegro, a nutritionist with the Panamanian Education Ministry, after getting to know the school feeding system in the city of Vitoria, in central-eastern Brazil.

Towards a Global Role for ACP?

By Goele Geeraert
The African, Caribbean and Pacific Group of States (ACP) met this week in Brussels for the 105th Session of its Council of Ministers to discuss the key question of how these 79 countries could play a more effective role for their own citizens and in the international arena.

Social Forum Calls for Fight Against Corruption, to Defend the Amazon

By Milagros Salazar
Corruption has penetrated the Amazon rainforest like an illness that infects everything, said Ruben Siqueira, coordinator of the Pastoral Land Commission (CPT), during the VIII Panamazonic Social Forum (FOSPA), which brought together in the Peruvian Amazon jungle representatives of civil society from eight Amazon basin countries.

ACP: One Billion People to Speak To Europe with One Voice

By Baher Kamal
Seventy-nine countries from Africa, the Caribbean and the Pacific, which are home to around one billon people, will speak with one voice as they prepare to negotiate a major partnership agreement with the European Union (500 million inhabitants) in May.

By Diego Arguedas Ortiz
Sunita Daniel remembers what the school lunch programmes were like in her Caribbean island nation, Saint Lucía, until a couple of years ago: meals made of processed foods and imported products, and little integration with the surrounding communities.

By an IPS Correspondent
The Perez-Guerrero Trust Fund (PGTF), which has been funding small scale projects in developing countries since 1983, is calling for new project proposals on an April 30 deadline.