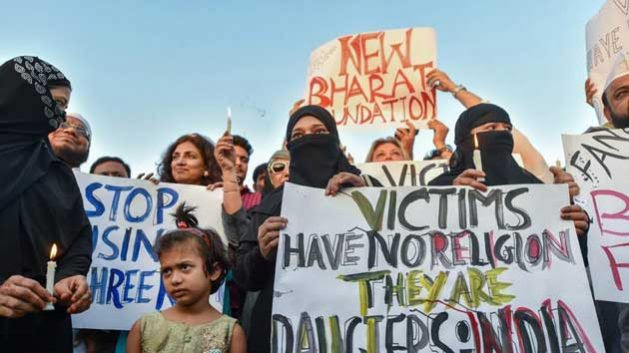 A protest march in New Delhi against the rape a a child in Kathua. Credit: PTI
NAIROBI, Kenya, Apr 23 2018 (IPS) - Grotesque and barbaric, is the only way to describe the rape and murder of an 8 year old child, in a country where women and girls are traditionally revered as Goddesses.
There have been numerous cases of rape across the country, however, the story of little Asifa, who was sedated, gang raped, tortured and then murdered in Kathua, Jammu and Kashmir has haunted us all. While Asifa was killed in January 2018, the details of the case only grabbed national headlines in April, this was partly due to the heinous nature of the crime, and disturbing allegations that the child’s treatment, was the result of a concerted plan of action to drive out the nomadic Muslim community which her family belongs to.
Since then, the media in India has been awash with case after case of babies and girls being raped across India, with little to no action taking place to prevent this deluge of sexual assault and violence. From an 8-month old baby girl in Indore, to a 9-year in Etah, Uttar Pradesh, to a 10-year old girl in Chhattisgarh, to the rape of a 16-year old in Unnao, Uttar Pradesh (allegedly by a leader in the Bharatiya Janata Party, India’s ruling party), there is seemingly a new atrocious daily headline which exposes the rape and murder of yet another child.
All the while, elected officials have either been shockingly silent, or have spoken out too late, and some have even shown their active support for the accused perpetrators of such crimes.
Have we become so numbed in India, that such revelations no longer hold any shock value for us? Has the simple humanity of protecting our innocent and helpless children from harm, the most important duty of every adult in India, forsaken us?
Consider this. In 2016, over 19000 cases of rape were registered in India. In 2017, in India’s capital Delhi, an average of 5 rapes was reported every day.
In response, through an executive order and cabinet approval, the Indian government introduced the death penalty for those found guilty of the rape of a child under the age of 12.
Globally death sentences are coming to an end. It is my personal belief that the death penalty will have little or no effect, however heinous the crime is. As Friedrich Nietzsche said, “when fighting a monster, be careful not to become a monster yourself”.
The issue that India is grappling with at present is an endemic, societal problem and no quick fixes are likely to solve it. Harsh penalties alone will not be a deterrent. As the malaise is systemic, so too should be the cure.
So here is a four-tier approach
Firstly, it is important to increase the reporting of rape and assault. Across the world rape is a generally underreported crime; this is all the more true in India. It is essential that women and children be educated on their rights on reporting of a violent act against them through an active social media campaign.
Secondly, it is absolutely vital that law enforcers are trained to react swiftly and with sensitivity to women and children who have been harassed, assaulted or raped. Sensitivity training and knowledge of the rights of women and children are another vital need and must be made mandatory for all law enforcement agencies.
Thirdly, punishments need to be exemplary and widely covered in the media. There must be a “shock and awe” campaign of zero tolerance of sex offenders and those who kill and violate women and children. Fast track courts must ensure that the law is surgical and unrelenting in pursuing and ensuring that such offenders face the full force of justice, regardless of their rank and station.
Finally, a nationwide campaign is needed to ignite values and traditions that respect and nurture women and children. This can only be borne out of consensus in society. Awareness amongst men of the scope of this issue is critical. Men who turn a blind eye to such brutal acts in their own neighbourhoods, communities and families are just as culpable as those that perpetrate these acts. Action from courts and police will not suffice if the community remains defiantly opposed to change.
So the biggest question remains: how exactly to engage the entire populace to initiate a change in mindset? How can a national conversation on this subject be leveraged into national action?