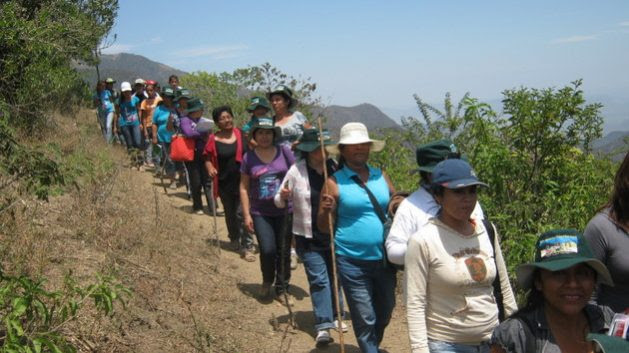 Under the hot sun of the Pacific Ocean coast, in the department of Piura, 25 women farmers undergoing training in the Agroecological School return from a technical assistance activity in the province of Morropón, in northern Peru. Credit: Courtesy of Sabina Córdova
CHULUCANAS, Peru, Apr 26 2018 (IPS) - Getting children and adolescents to replace junk food with nutritious local organic foods is the aim of a group of women farmers in a rural area of Piura, on Peru’s north coast, as they struggle to overcome the impact of the El Niño climate phenomenon.
“We have given talks about healthy eating in schools, because in today’s times we have forgotten what it means to eat healthy, nutritious food, and everything is fried or sweets, which is why there is malnutrition and obesity,” one of the women, Rosa Rojas, who has an organic garden in the community of Piedra de Toro, told IPS.
She is one of 25 women farmers trained in agro-ecological techniques by the non-governmental Flora Tristán Centre for Peruvian Women. They are engaged in small-scale agriculture in the valleys and highlands of Morropón, one of the eight provinces in the department of Piura, whose capital is Chulucanas.
"I feel that I contribute to the well-being of my family and my community. With the other women we are constantly working to eliminate malnutrition, anemia and obesity from our lives because these cause other ills. If we sit idly by, what future are we going to have?" -- Jacqueline Sandoval
The department of Piura was hit between December 2016 and May 2017 by the El Niño Southern Oscillation (ENSO), a complex weather pattern resulting from variations in ocean temperatures in the equatorial Pacific.
During that period, heavy rains and flooding affected more than one million people, left 230,000 without homes, and destroyed 1,200 hectares of crops, according to the governmental National Information System for Disaster Prevention and Response.
Rojas, 53, remembers those terrible months when many families were torn apart with the departure of parents or older siblings, forced to go abroad to make a living and to support those left behind in their communities.
“Women were left in charge of the homes and the plots of land, worrying about how to put food on the table for our children and grandchildren,” she said.
“We had to eat the beans that we had kept for seed, and supporting each other among all the neighbours, we have recovered little by little to be able to plant again on the land that had been washed clean by the rains,” she said.
Almost a year later, she has replanted her vegetables, including coriander, lettuce, carrots, beets, cabbage, leeks, tomatoes, yellow peppers and cucumbers, using organic fertiliser that she makes herself.
“My family’s diet is enriched with these healthy and nutritious organic fruits and vegetables. My community is waking up to what is natural food, we are learning the importance of eating vegetables daily, and that is what we are sharing at schools with teachers, mothers, fathers and students,” she said.
Yaqueline Sandoval, 42, a farmer in the community of Algodonal, in the neighbouring municipality of Santa Catalina de Mossa, is also recovering from the ravages of the coastal El Niño. 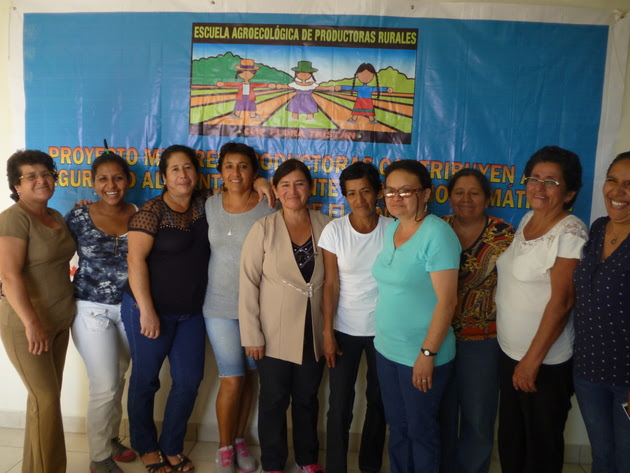 Rosa Rojas (2nd-R), stands with other women farmers participating in the Agroecological School of the Flora Tristán Peruvian Women’s Centre, where they were trained in organic production techniques that they have been applying in their gardens, in the rural area of the department of Piura, in Peru’s northern coastal region. Credit: Mariela Jara / IPS
She says she has resumed planting in her organic garden, together with her family, where the star product is the cowpea bean or black-eyed pea, which they call the “bean of hope” as it is ready for eating in a short time.
“Just 40 days after planning we are eating our beans. It is a very generous plant, it feeds us and it is a seed for the future because it adapts to different conditions and is very strong, something vital now we are facing climate change,” Sandoval told IPS.
Changing school habits
This is one of the inputs that the farmers use to create “healthy lunch boxes,” for students to carry their meals to eat in the public primary and secondary schools in the urban centres of the municipalities.
The lunches include meals prepared with local produce, to replace what schoolchildren were buying in the kiosks at their schools, such as cookies, crackers and chocolate, sugary drinks and other industrially processed sweets.
“We make tortillas with our vegetables and beans, we prepare passion fruit (Passiflora edulis) soft drinks, and we accompany it with a banana,” Sandoval said, describing what the children are now carrying in their lunch boxes.
“They are healthy and nutritious fruits of our land, free of chemicals, that nourish and do not damage the children’s health,” she said proudly about the initiative she is carrying out with other mothers of schoolchildren at the local “Horacio Zevallos” school.
This experience began last year with talks in the high school classrooms on the benefits of a healthy diet and the negative effects on their bodies and health of fast food or junk food.
“There was so much interest that this year in the Science, Technology and Environment course they are working in a small garden that they have set up on the premises of the school, where they are planting lettuce, carrots and other vegetables,” she added.
Sandoval, who considers herself an activist and entrepreneur, said agroecology is a tool that has allowed her to improve her relationship with nature, to make better use of the soil, water and seeds, and consequently, to improve her diet and health.
“I feel that I contribute to the well-being of my family and my community,” she said. “With the other women we are constantly working to eliminate malnutrition, anemia and obesity from our lives because these cause other ills. If we sit idly by, what future are we going to have?”
Sandoval’s concern is well-founded.
The governmental Observatory of Nutrition and the Study of Overweight and Obesity indicates that more than 53 percent of Peru’s population has excess body fat and the United Nations Food and Agriculture Organisation (FAO) ranks the country as the third in Latin America in terms of overweight and obesity. 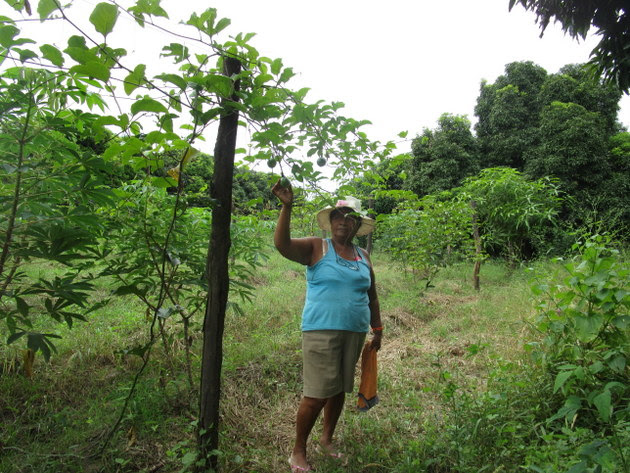 Escolástica Juárez, 57, stands on her family farm where she grows organic fruits and vegetables in the village of Chapica, Morropón province, in the northern coastal department of Piura, Peru. She is involved in the effort to promote healthy eating at the local school. Credit: Courtesy of Sabina Córdova
For its part, the Pan American Health Organisation (PAHO) has warned that one in five children under ten is already experiencing this problem due to the combination of factors such as inadequate diets and low levels of physical activity. And in Piura, three out of ten children under five suffer from anemia.
Eating healthy and nutritious food in a region rich in biodiversity could seem normal. But it is still a pending objective due to a lack of public investment in small-scale agriculture, training for rural populations and attention to the problem of water shortages.
In this context, taking advantage of traditional knowledge and using new know-how acquired in training and thanks to technical assistance puts women farmers in a better position to face the permanent challenges of climate change in order to achieve food security.
“Knowing about agroecology helps us use water more efficiently, irrigate our crops without wasting, replace crops that need a lot of irrigation, and choose beans that adapt to droughts. This knowledge is important for our food security,” said Escolástica Juárez.
Juàrez, a 57-year-old farmer, lives in the village of Chapica, in the municipality of Chulucanas, where the temperature reaches 37 degrees Celsius.
She has taken the healthy lunchbox initiative to the local “Colegio de Fátima” school.
“The school principal has called us back to continue with the talks this year,” she told IPS. “My grandson tells me that more of his classmates are eating healthy meals, it’s a matter of persistence, it takes time to bet families to change bad habits but it can be learned.”
She added that she feels grateful for the “bean of hope”, which like other farmers she has learned to cook in different ways, based on knowledge they have shared among themselves.
“We can eat them fresh from the pod, store them to cook later, and select some for seed. Even if there is a shortage of water, we know that it will feed us. We return the plant’s generosity sharing what we know with other neighbours and at the schools,” Juárez said.