The Naga’s right to know | The Indian Express

The Naga’s right to know | The Indian Express

The Naga’s right to know This agreement has been hailed as the precursor to peace in conflict-ridden Nagaland, in Naga-inhabited states of Assam, Manipur and Arunachal Pradesh.
Most Indians are unaware of the history, politics, cultures and economics of the Northeast — and most probably, couldn’t care less. Still, the nation must know some crucial aspects of the history and politics of this region that impact the working of Indian democracy. Without going into the finer details of the long-drawn Naga political issue, let’s just focus on one aspect of the Framework Agreement that was signed between the government of India and the NSCN (IM) on August 3, 2015. This agreement has been hailed as the precursor to peace in conflict-ridden Nagaland, in Naga-inhabited states of Assam, Manipur and Arunachal Pradesh. And, it could well be so. However, there is another dimension to the Agreement, which has not received attention.
Except the signatories of this Agreement — the representatives of the GoI, the NSCN (IM) and those involved in the negotiations — nobody knows its contents. Because the contents have not been disclosed till date, there are only assumptions, conjectures, speculations, suspicions, a whole lot of propaganda and one suspects, a lot of lies too. In the absence of proper disclosures, in the absence of transparency, this is natural.
There are two shades of opinion in Nagaland on the Agreement. One maintains that it is not necessary to disclose the contents because the leaders know what they are doing and that the people have faith and trust in them. This opinion is typical of the general tribal thinking that leaders know what they are doing and must not be questioned. Because the collective is prioritised in tribal communities, “leading” is perceived to be the sole prerogative of the leadership. This also means that dissent is not encouraged. To question is generally considered an act of revolt against the leadership. Most of the consensus the tribal communities boast of is basically achieved through coercion.
The other view insists that the contents of the Framework Agreement must be revealed for the public to discuss them — after all, the Agreement is about the Naga people and, therefore, fundamental to their future. This opinion clearly reveals a line of thinking tribal communities are normally not comfortable with, as here the individual demands the right to know how her future is being designed. The individual here wants to participate, or at least have a say, in designing her future. Clearly, the debate around the Agreement underscores the clash between the individual and the collective and the clash of the traditional systems with the modern concepts of democracy.
Nagaland was constituted as the 16th state of the Indian Union in 1963 under the Constitution of India. So, whatever is decided for the people of this state must be in the knowledge of the people, which means the people of Nagaland have the right to information. Therefore, for the GoI to be a party to this scheme of concealment is unconstitutional and undemocratic. While it is true that the Centre’s interlocutor has been in talks with numerous NGOs and civil society groups, these consultations still do not counterbalance the non-disclosure of the Agreement’s contents. Under a Constitution that mandates one-person-one-vote, in other words, prioritises the individual, can collectives decide for individuals? After all, citizens have not voted for NGOs or civil society groups and have not surrendered their decision-making rights to them. Let’s not bring in Article 371 (A) here because the NGOs and civil society groups in Nagaland are not traditional bodies — most of them have been formed since the 1990s.
These questions underscore the numerous lines of thinking emerging in the Naga society, which are the consequences of modern education and the explosion of technology. They also underline the aspirational Naga, young and old, venturing into spaces beyond the traditional. This is not to suggest that the aspirational Naga has abandoned her cultural moorings, but to point out how far the Naga society has moved into the national and global terrain and how the generational gap pulls her back to the confines of the village, so to speak.
The view that the said the Agreement’s contents must be disclosed persists because of the need to know whether the aspirational Naga’s interests are being addressed in it. This is crucial because like any tribal society, however much culture, customs and traditions are crucial, so are the imperatives of surviving in a world that has moved light years away from the crucibles of our ancestors, who survived on subsistence economy, and now us, who survive on doles from the central government and in fear of guns. And this necessarily translates into ownership of the right to information and the right to be heard. Indubitably, there are generations of Nagas who have been breastfed by different, broader and all-encompassing concepts and ideals of democracy, freedom, liberty, justice, equality and fraternity that are not the leitmotifs of traditional tribal communities. The aspirational Naga lives in a world that has no resemblance to the world of her great-grandfather and there is always the fear that she will be pushed back into that world.
The question is whether the GoI is pushing back the Naga to her great-grandfather’s world or empowering and enabling her to travel, survive and thrive in a world that all Indians aspire to, by remaining silent on the contents of the Framework Agreement. Keeping in mind that looking forward is not the same as abandonment of cultural moorings, would India understand these dichotomous opinions and take a stand on them? While the politics of the Naga issue has always received attention, it is the economic trajectory the ordinary Naga is focused on. And, this is one reason, downplayed and disregarded – a settlement has eluded the Naga problem for decades. We need to know if the Framework Agreement addresses this.
The writer is editor, Nagaland Page
For all the latest Opinion News, download Indian Express App
More From Monalisa Changkija 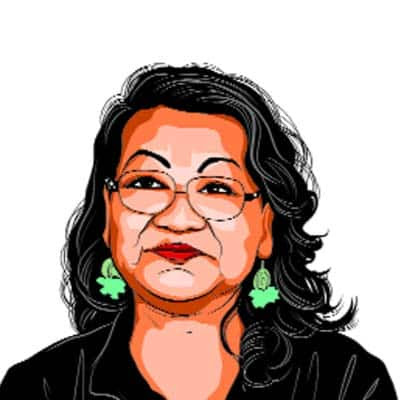