Thousands take to the streets to demonstrate against decision clearing five men of raping 18-year-old in Pamplona in 2016, but convicting them of lesser charge of sexual abuse 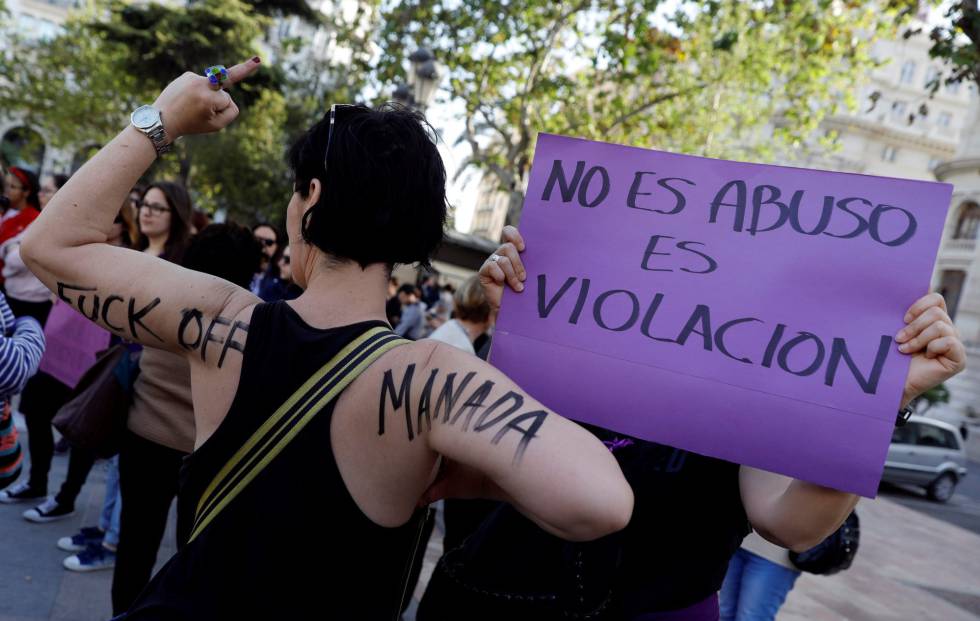 Over a thousand people protested in Valencia. KAI FOERSTERLING EFE
EL PAÍS
Madrid 27 ABR 2018 - 08:19 ART
Thousands of people demonstrated across Spain on Thursday to protest a verdict clearing five men of rape in a high-profile case that has drawn attention to social attitudes towards sexual violence.
A court in Navarre found the men guilty of sexually abusing an 18-year-old woman at the 2016 Running of the Bulls festival in Pamplona. They each received nine-year prison sentences, as well as having to pay €50,000 in compensation and being subject to restraining orders to keep them away from the victim.
But they were convicted of sexual abuse, not sexual assault (rape), which would have entailed much longer prison terms. The prosecution had sought 22 years for each defendant on the more serious charge.
The case became known as La Manada (The Pack) after the WhatsApp group that the men used to chat. The victim was assaulted inside a building lobby in Pamplona, and the men filmed the abuse on their cellphones.
The defense team portrayed the encounter as consensual, noting the woman did not appear to struggle in the recording. In their verdict, the judges agreed that there was no violence or intimidation, two necessary requirements for sexual assault under Spanish law.
On Friday the public prosecutor in Navarre announced that “in the coming days” it would be filing an appeal against the ruling, on the basis that the facts established in the case “constitute an offense of sexual assault (rape) and not just sexual abuse.”
The statement released by the prosecutor added that it had already studied the sentence passed by the provincial court that handled the case and that the appeal would be based on “breach of the law” and filed “with the Civil or Penal sections of the Navarre High Court.” The statement also said that the prosecutor continues to “officially consider” that La Manada committed a crime of sexual assault, and as such, rape.

As news of the ruling emerged, protests began to take shape across the country, mostly led by women’s groups. In Madrid, 10,000 people according to police estimates congregated in front of the Justice Ministry. “We are incensed that rape in Spain costs nine years,” said Carlota Álvarez, of the Madrid Feminist Movement that organized the demonstration.
Aurora Adalid, 36, protested with her five-month-old daughter in her arms. She said she feels defenseless and vulnerable, and does not want her daughter to experience fear: “I don’t know what it is that they consider violence,” she said.
“It seems that women cannot go out partying because if they do, that seems to give men the right to rape them,” added Rocío Bedmar, 61.
In Barcelona, 6,000 people stood inside Sant Jaume square holding signs that read: “Whatever they say, it’s not abuse, it’s gang rape!”
Mayor Ada Colau, who joined the protest, had earlier tweeted: “Sister , #josiqueetcrec [I believe you], and I am angry that after the violence of multiple rape you now have to suffer the violence of #patriarchaljustice. You are not alone, today there will be thousands of us taking to the streets and joining our voices to yours.”
“She has been judged more harshly than the men. In these conditions, nobody will dare file a complaint,” said Eugenia and Susana, two 18-year-old students protesting in A Coruña, in the northwestern region of Galicia.
Elisa David, a prison worker protesting outside Valencia City Hall, said she was shocked at the ruling. “I teach at the prison and I am constantly seeing extremely long sentences being served by people who have barely done anything. So this ruling seems like a joke to me.”
Esperanza Bosch, spokeswoman for the Mallorca-based feminist group Lobby de Dones, said it was particularly outrageous that one judge on the panel defended a complete acquittal for the men. She asked for more training for judges, otherwise “we will continue to see rulings claiming that a woman has been raped because she was wearing a miniskirt, or because she did not say no clearly, or because it was unclear how she defended herself.”
In Bilbao, thousands of people clogged the city center between Plaza Circular and City Hall, chanting “Where is justice?” And in Seville, where all five men hail from, a few hundred people – mostly women – congregated outside City Hall in Plaza Nueva, carrying banners that read “I believe you,” and: “We don’t forgive, we don’t forget.”
Constanza Lambertucci (Madrid), Maria Josep Serra (Valencia), Pedro Gorospe (Bilbao), Antonio J. Mora (Sevilla), Rebeca Carranco (Barcelona), Lucía Bohórquez (Palma) and Sonia Vizoso (A Coruña) contributed reporting to this story.
English version by Susana Urra.
Publicado por salud equitativa en 5:42