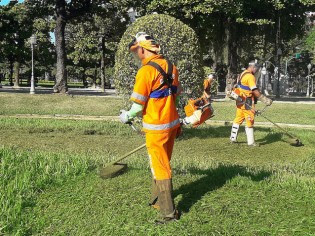 Occupational Safety Improves in Latin America, Except Among Young People

By Fabiana Frayssinet
Despite progress achieved in occupational safety in Latin America, the rates of work-related accidents and diseases are still worrying, especially among young people, more vulnerable in a context of labour flexibility and unemployment.

By International Organization for Migration
Work by aid agencies in Bangladesh’s Rohingya refugee camps to create life-saving access routes and prepare people for floods, landslides and other disasters ahead of the upcoming monsoon and cyclone season is under imminent threat unless urgent funding is secured in the next six weeks, according to IOM, the UN Migration Agency.

By Siddharth Chatterjee
Cultural diplomacy is a soft power that promotes the exchange of ideas, information, art, and culture to strengthen friendship and cooperation among nations and communities.

Holding on to Hope

By Leonard Doyle
Almost a year after the historic city of Marawi in Mindanao was attacked by extremists, tens of thousands of displaced Filipinos remain homeless, unlikely to return to their devastated homes anytime soon.

By Zofeen Ebrahim
"If I'm assured that my home and my village has been de-mined, I'd be the first to return with my family," says 54-year old Mohammad Mumtaz Khan.

By International Organization for Migration
In Jordan’s Azraq Camp where over 45,000 Syrian refugees are seeking shelter from the conflict across the border, 14-year-old Abdallah is finishing the 8th grade at a school run by the Ministry of Education.

By IPS World Desk
The theme for the 25th celebration of World Press Freedom Day is “Keeping Power in Check: Media, Justice and The Rule of Law,” focussing on the importance of an enabling legal environment for press freedom, and gives attention to the role of an independent judiciary in ensuring legal guarantees for press freedom and prosecution of crimes against journalists..

By Trevor Wilson
The lead-up to the Australia-ASEAN Summit in Sydney on 16-18 March 2018 was characterised by widespread and well-publicised protests in Sydney against human rights abuses occurring in several ASEAN member countries – namely Cambodia, Myanmar and Vietnam.

From Declaration to Action: Improving Immunization in Africa

By Joyce Nganga
Inviolate Akinyi, a 46-year-old grandmother, is certain that her grand-daughter needs to get all her vaccines for her to grow up healthy and strong. She uses a mix of private and public clinics in Kibera, one of the largest informal settlement in Nairobi, to get the 15-month-old the shots she needs.

The Nowhere People: Rohingyas in India

By Neeta Lal
A devastating fire in a shanty at Kalindi Kunj, a New Delhi suburb, that gutted the homes of 226 Rohingya refugees from Myanmar, including 100 women and 50 children, has trained a spotlight on India's ad hoc policy on international migrants.

By International Organization for Migration
Over 40,000 Rohingya families in Bangladesh’s Cox’s Bazar refugee camps have now been trained in shelter upgrade techniques ahead of the fast approaching monsoon and cyclone season. Women are playing a key role as part of a major project being rolled out by IOM, the UN Migration Agency.

By Ivar Andersen
BANGLADESH. Garment factories lie side by side along the freeway leading into the capital, Dhaka. But between the concrete blocks, a square, uninhabited piece of land is overgrown with greenery. This is where Rana Plaza used to be. Shirin Akhter, 18, turns her eyes away.

By Geetika Dang , Vani S. Kulkarni and Raghav Gaiha
Kidnappings and abductions have soared since 2001. The National Crime Records Bureau (NCRB) shows that their share in total crimes against women nearly doubled from 10% in 2001 to 19% in 2016. More striking is the fact that 11 women were kidnapped or abducted every day in Delhi in 2016. What these statistics do not reveal are brutal gang-rapes of kidnapped minors and women, multiple sales to husbands who treat them as animals, unwanted pregnancies, police inaction, and frequent abandonment with nowhere to go—not even to their maternal homes—because of the stigma of a being a “prostitute”.

By Siddharth Chatterjee
Grotesque and barbaric, is the only way to describe the rape and murder of an 8 year old child, in a country where women and girls are traditionally revered as Goddesses.

By Maged Srour
Atik and Said have many things in common. They are both from Bangladesh, both are about the same age, in their thirties and, they are both migrant workers in an Italian restaurant in the heart of Rome, a stone’s throw from Saint Peter’s Basilica. They are not the only migrants working in the food service industry in Italy, where most of the pizza makers today are Egyptians and most of the Chefs are either Bangladeshis or North Africans. This is an interesting phenomenon in a country known for its cuisine where many of the Chefs today are not locals but foreigners.

By James Jeffrey
A new exhibition that opened April 5 at London's famous Victoria and Albert museum of ancient treasures looted from Ethiopia has revived debate about where such artifacts should reside, highlighting the tensions in putting Western imperialism in Africa and the past to rest.

By Sopho Kharazi
The 25th celebration of World Press Freedom Day will be led by UNESCO and the government of Ghana in Accra on May 2-3. The theme is “Keeping Power in Check: Media, Justice and The Rule of Law,” covering the issues of media in respect to the judicial system and transparent political processes.

By International Organization for Migration
IOM, the UN Migration Agency, reports that 18,575 migrants and refugees entered Europe by sea through the first 108 days of 2018, with about 40 per cent arriving in Italy and the remainder divided between Greece (38 per cent) and Spain, at roughly 20 per cent. This compares with 43,645 arrivals across the region through the same period last year, and 205,613 at this time in 2016.

By Editor, The Daily Star, Bangladesh
Prime Minister Sheikh Hasina's call to the international community to put more pressure on Myanmar to take back Rohingya refugees is very timely, because, it seems, only international pressure can make Myanmar act according to the deal. Myanmar's assertion that it has repatriated the first Rohingya family of five from Bangladesh just goes to show how insincere it is in honouring the repatriation agreement that was signed between Bangladesh and Myanmar last November. Rights activists and international relations experts have aptly called the move by Myanmar "a public relations stunt."

By Will Higginbotham
More than 200 child soldiers were released by armed groups in war-torn South Sudan, and help will be needed to ensure their safe and bright future, according to a UN agency.The release took place in Western Equatoria State and follows a similar release last month that saw 300 children freed.