Draconian and dangerous | The Indian Express

Draconian and dangerous | The Indian Express

There is no proof that death penalty will deter sexual violence against children. It could further harm victims 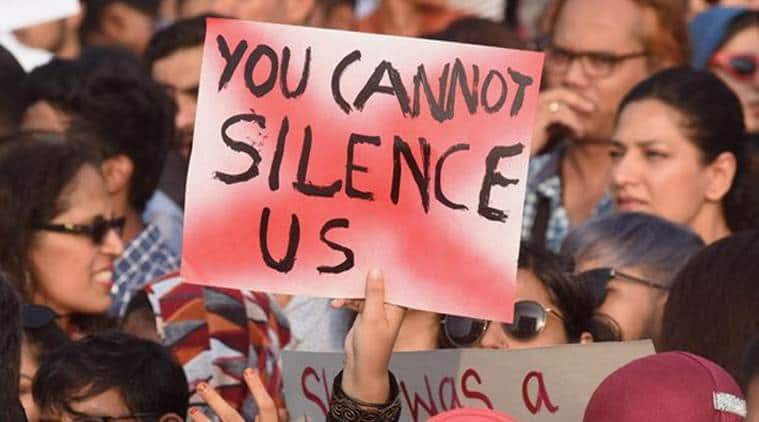 Protestors in Mumbai demanding justice for Kathua rape victim during a silent protest on Sunday. (Express Photo by Kevin DSouza/File)
The gruesome rape and murder of an eight-year-old child in Kathua was a hate crime against a Muslim nomadic tribe — the Bakherwals. It is a manifestation of the hatred towards Muslims that is being fuelled by aggressive Hindu nationalism. The lives of innocent children are being consumed by this hatred. As the cherubic face of the eight-year-old with her large imploring eyes stared at us from TV screens, it shocked the conscience of the nation that erupted in spontaneous protests.
But some protesters with their simplistic understanding of the complexity of the crime, viewed the gruesome violence merely as a “gender crime”, stripped of its communal undertones. They demanded death penalty for rapists in future as a deterrent. Rather surprisingly, the protesters included the chairperson of the Delhi Commission for Women, Swati Mahiwal, who went on a fast in support of this demand.
A hate crime committed in the name of aggressive Hindu nationalism was more difficult to deal with; enacting a law that stipulated death penalty for rapes to quell the protests was easy. The announcement that the government would enact a law to introduce the death penalty was sufficient to calm down the protesters. And, the government lost no time in bringing about a draconian ordinance to give legal effect to the announcement.
A similar demand for death penalty was also raised by protesters in December, 2012, after the brutal gang-rape and murder in a moving bus in Delhi. This act of sexual violence had also shocked the nation. But the government-appointed Justice J S Verma Committee stood firm against pressure and refrained from recommending death penalty. Several women’s organisations had deposed before the Commission, opposing death penalty.
But this time around, no committee was set up, no expert views of those working with rape survivors were sought and in a typical knee-jerk response, the government hurriedly brought about an ordinance declaring death penalty for rapes of children under 12 years and a minimum punishment of 20 years imprisonment.
There is no evidence to prove that stringent punishment is a deterrent. In 1983, when the rape law was amended for the first time, following protests against the adverse judgment in the Mathura rape case, a mandatory minimum punishment of seven years was prescribed for all rapes and 10 years for aggravated rapes. In 2013, when the rape law was amended again after the December 16 incident, the earlier discretion to award less than the minimum prescribed punishment was taken out. In case of conviction, the courts had no choice but to award the prescribed punishment.
It is interesting to see how this has played out in terms of rape reporting in the country. In 1983, the year of the amendment, there were 6,019 reported cases, which increased to 9,099 in 1988 and 9,519 in 1990. From then onwards, there has been a steady increase year after year. In 2012, there were 24,023 cases. This was the year when a special law against child sexual abuse, the Protection of Children From Sexual Offences (POCSO) Act was enacted. The Criminal Law Amendment Act was passed in early 2013. Instead of a deterrent, that year saw a sharp increase of 8,500 cases and a further increase of 3,000 cases in 2014, peaking at an all-time high figure of 36,735 cases. A slight drop of 5.7 per cent was seen in 2015 when the numbers came down to 34,651 cases. But again in 2016, this figure increased to 38,947 cases.
It can be argued that the increase was due to a greater awareness because of media campaigns. However, better reporting did not lead to higher conviction rates and stringent punishment did not have the desired impact of reversing the rape culture prevailing in India. In fact, while incidents of rape continue to rise, conviction rates are dismal. A large number of those who report are rendered liars due to lapses in investigation and by a hostile criminal justice system governed by patriarchal norms.
While there is no proof that the death penalty will act as a deterrent, the new ordinance may cause more harm to children as it does not place their interests at the centre of remedial measures.
The gruesome Kathua rape is not the norm. Most cases of child abuse take place within our homes and in our neighbourhoods. As per a 2016 NCRB report, 95 per cent of rape victims knew their assailants. A child under 12 does not walk alone to the police station to report the crime. It is the family members who report the crime. In cases of incest, there will be even greater reluctance to report after this ordinance. Issues will be settled through family and neighbourhood negotiations, placing the child at even greater peril. Rather than providing child protection and shelter away from the risk of future sexual violence, the law will deter children from reporting abuse when they know that their complaint would place a family member at the risk of being hanged. At another level, when the punishment for rape and “rape and murder” is the same, there is a greater risk of stranger-rapes ending in murder — to silence the victim.
So one wonders, for whose benefit the government has brought about this ordinance in such haste? It seems a clever move to silence the protests against the hate crime in Kathua.
The writer is a women’s rights lawyer and founder of Majlis, an NGO which provides socio-legal support to rape survivors
For all the latest Opinion News, download Indian Express App
More From flavia agnes