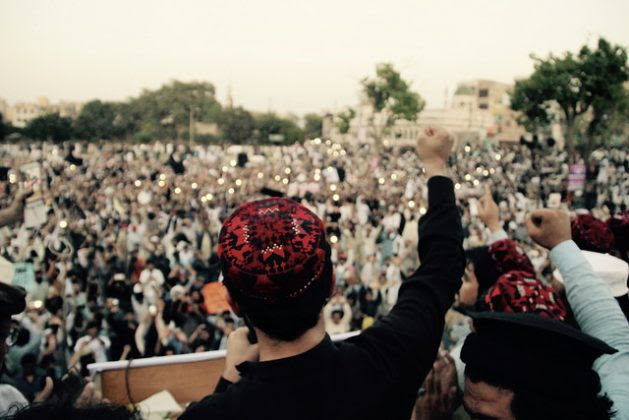 Manzoor Pashteen, a leader of the the Pashtun Tahafuz Movement, addresses a rally in Lahore on April 22, 2018. Credit: Khalid Mahmood/IPS
KARACHI, Apr 26 2018 (IPS) - “If I’m assured that my home and my village has been de-mined, I’d be the first to return with my family,” says 54-year old Mohammad Mumtaz Khan.
Khan lived in the mountainous village of Patwelai in South Waziristan, a rugged territory in the Federally Administered Tribal Areas (FATA) near the Afghan border, one of the world’s most important geopolitical regions. In 2008, he shifted to Dera Ismail Khan in Khyber Pakhtunkhwa province with his wife and six children.
They had to leave Patwelai hurriedly, “with just the clothes on our backs”, after the Pakistan army decided to launch a major ground-air offensive to cleanse the entire area of the Taliban. 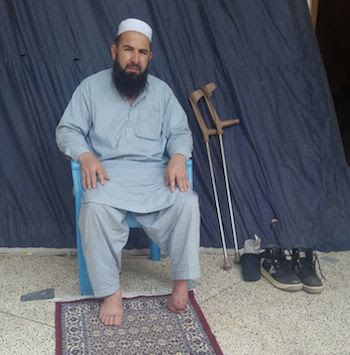 Mumtaz Khan lost his foot to a landmine in his home. Credit: Khan family

Since then, the military carried out a series of intermittent operations across FATA till 2016, when they claimed they had destroyed the Pakistani Taliban’s infrastructure in the country.
That same year, in 2016, the army gave the internally displaced persons (IDPs) — over half a million — a clean chit to return to their homes. Feeling lucky, Khan and a few dozen men decided to visit their village and assess the situation before returning with their families.
It was while he was entering his home through a window that he accidentally stepped on a landmine. “There was a boom and before I could fathom what had happened, I saw my bloodied left foot,” Khan said.
“I am lucky that I got away with a small injury. It may not be so the next time around,” he said, adding that the mountains and valleys are “teeming” with improvised explosive devices (IED) and explosive remnants of war (ERW).
“Despite having cleared the area of militants, it is not possible for many to move about freely as the place remains infested with landmines,” agreed Raza Shah, who heads the Sustainable Peace and Development Organization (SPADO), an active member of the global Control Arms Coalition and International Action Network on Small Arms (IANSA). Since 2010, SPADO has been blocked from working in FATA.
After the demand by the Pashtuns earlier this year during their long march to Islamabad, the authorities promised they would start de-mining the area.
"Ghost Towns"

The murder of 27-year old Naqeebullah Mehsud, a young Pashtun shopkeeper from South Waziristan living in Karachi, by the police in a "fake encounter" opened up the floodgates of resentment and anger of the Pashtuns at their treatment by the state that has been pent up for decades, spurring what is today known as the Pashtun Tahaffuz Movement.

Gohar Mehsud, a journalist from South Waziristan, said it was a sad indictment of the Pakistani leadership that the
Pashtuns had to travel in the thousands to Islamabad to lodge their complaints. "The conversation that took place in whispers among themselves is now out in the open. For far too long they had been too scared to accost or even speak out against the high handedness and atrocities committed by the army officials and the political agent posted in their areas by the federal government," he said.

For the first time, said Mona Naseer, co-founder of the Khor Network of tribal women, the long march movement gave a new face to FATA and showed "there is more to this region than drones, militants and militancy; it's given voice to the miseries faced by the tribespeople," she said.

Mumtaz Khan, the schoolteacher from the South Waziristan village of Patwelai, recalled when he first re-entered his village, cutting through tall wild grass and wild shrubs, "it was like I had come to a ghost town hounded by wild boar." Khan said the road to the village was broken down and they had to walk a good couple of hours to get to their village.

"Not one house was intact -- either the walls had collapsed or the roof had given way. Our homes had been looted and ransacked. Cupboards and chests opened crockery heartlessly thrown with broken pieces, dust was strewn all over the place," he said, adding that it was painful to see the cruelty and disdain with which their homes had been ransacked.

The tribesmen say that the military operation has left their land poisoned. "The land has become infertile. The apple tree either does not give fruit and when it does, it is attacked by pests, the walnuts on the walnut trees is much smaller and not as sweeter," Mehsud said.

In addition, he said, many of the IDPs who have returned live in tents outside their homes as the houses are in a collapsed state and unsafe to live in.

The state had promised compensation of Rs 400,000 for homes that had been completely annihilated and Rs 150,000 for those partially damaged, but that is clearly not enough. "It costs Rs 5 to 6 million to build very basic homes!" said Mehsud.

Due to the remoteness of the area, he said, "The policy makers and the top government officials, who can make a difference, never visit the place to find out why the Pashtuns are angry. Even the media is not there to report the ground reality. The local administration and the army officials are their point of contact and whatever they tell them is what they know. The latter rule over the tribesmen as kings!"

But Shah said that unless India agreed to accede, Pakistan will not take the first step. “Perhaps the way to go about it is to bring the issue on the agenda during peace negotiations and when talks around confidence building measures take place between the two countries,” he said.
SPADO is also the official contact point of the International Campaign to Ban Landmines (ICBL) and Cluster Munitions Coalition (CMC). It openly advocates for the universalization of the Mine Ban Treaty and the Convention on Cluster Munitions.
Along with FATA, accidents due to landmines are happening in other places in Pakistan. In 2017, according to SPADO, among the 316 injuries and 153 deaths in total, Pakistan-administered Kashmir recorded seven; Balochistan province 171; FATA 230; and KPK 61.
A majority of the injured and dead were men who were found either driving, fetching water, taking livestock for grazing, rescuing others who had stepped on a bomb, passing by etc. Children were usually playing outside when they chanced upon a shiny object, like a “disc-shaped shoe polish box” hidden in the grass which they attempted to pick  up.
“The figures that SPADO has collected  includes only those that were reported in the media and are just the tip of the iceberg,” Shah emphasized.
He said there was an urgent need for a national registry where such a record is kept and a more comprehensive rehabilitation programme is instituted.
“Taking care of the injured and maimed is expensive and long term,” he said, noting that when the victim is a child, for example, he or she will grow and require new prosthetic limbs. “While the army takes care of its own, unfortunately, there are very few institutes where civilians can go and seek help,” he said.