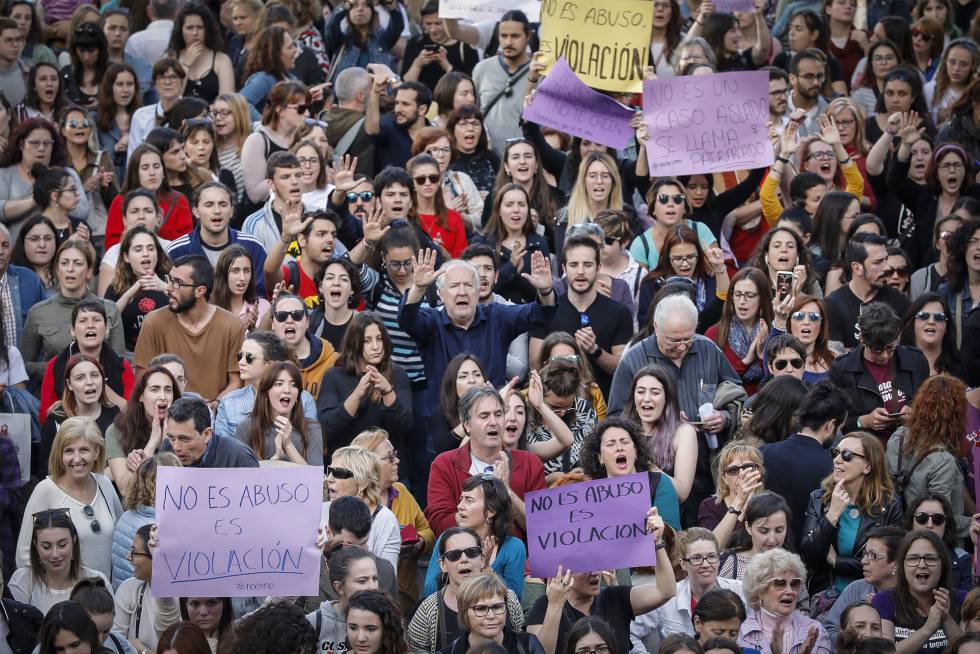 Protesters outside Valencia City Hall on Thursday. MÓNICA TORRES EL PAÍS
The verdict in the case known as “La Manada” has been deemed unsatisfactory by a large section of Spanish society. And no wonder. The social alarm triggered by a sexual assault against a young woman at the 2016 Running of the Bulls in Pamplona underscores how tolerance for sex crimes has shrunk in Spain.
There were nationwide protests on Thursday, some of them including the slogan “I believe you,” underscoring a fundamental and positive trait to emerge from this tragic event: that a majority of society gave credence to the victim and condemned the five attackers who, to top off their feat, shared videos of their deeds and tried to undermine the victim’s reputation in order to be cleared of blame for their heinous behavior. And society believed her, even though she admitted throughout that she had been passive in a violent and unexpected situation that followed a night of partying and alcohol.

Spanish society, as well as the Navarre court that heard the case, agreed that the victim did not consent to the encounter, and thus that the accused committed a very serious crime. Gone are the days when there was an obscene social connivance with unbearably sexist attitudes, and gone are the days when the victims were blamed for sex crimes.
But the debate triggered by the ruling goes further. Although the judges have punished the defendants with the highest possible penalty for sexual abuse – nine years in prison – what’s being questioned here is the category used to describe the crime, which many believe should have been rape, given the sequence of events described in the verdict itself.
The Criminal Code considers it to be sexual abuse, not assault (which includes rape) if it is not possible to prove that there was violence or intimidation that broke the victim’s will. And this is what the judges used to draft their verdict.

Even if no threats were uttered, the situation was intimidating for the victim, who was alone in a dark lobby and surrounded by five corpulent men ready to have sex with her

This legal nuance, which is not always easy to establish, leads to the painful question of just how much a person needs to fight to avoid being raped without risking getting killed, and still get recognized as a victim of a serious attack against sexual freedom while ensuring that the perpetrators do not enjoy impunity.
In this borderline case, the use of violence has been ruled out, but it is hard to accept that there was no intimidation. The verdict indicates that the young woman felt “intense uneasiness” that produced “a state of stupor and made her adopt a submissive, passive attitude.” Even if no threats were uttered, the situation was intimidating for the victim, who was alone in a dark lobby and surrounded by five corpulent men ready to have sex with her.
Only the judges have seen all the evidence in the case, but this verdict indicates that perhaps due account was not taken of the concept of intimidation in a sexual aggression case; this is the weakest point in the legal arguments. In any event, this case is a turning point: it has triggered a necessary social debate that would nevertheless be better off without rushed, demagogic opinions. Women should not feel less safe because of this verdict, nor are the sexual offenders getting off scot-free. Their prison conviction confirms it.
English version by Susana Urra.
Publicado por salud equitativa en 5:25