Print | Send by email |En español
Asma saw the roof collapse over her colleagues. Johora was dragged out of the rubble by her hair. Shirin was only 13 years old when her eyes and airways were filled with concrete dust. Five years have passed since the Rana Plaza garment factory in Bangladesh collapsed, killing 1 134 people. 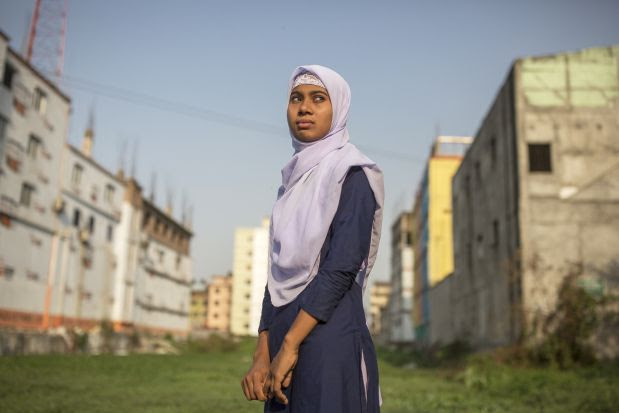 Since the accident, Shirin Akhter is too afraid to work in the garment industry again. Credit: Jonas Gratzer Arbetet-Global/IPS
DHAKA, Apr 24 2018 (IPS) - BANGLADESH. Garment factories lie side by side along the freeway leading into the capital, Dhaka. But between the concrete blocks, a square, uninhabited piece of land is overgrown with greenery. This is where Rana Plaza used to be. Shirin Akhter, 18, turns her eyes away.
”I don’t feel good about being here,” she says.
Five years have passed since the factory collapsed in what became the most deadly industrial accident in modern times.
Shirin was only 13 but had already worked in the garment industry for two years.
”I was very young. When visitors came to the factory, I had to hide in a storeroom. But there were other girls there who were even younger,” she says.
The memories are still fresh. The muffled sound of the roof caving in. The concrete dust that filled eyes and lungs. The horror when discovering that the exit was blocked by rubble.
Background: Rana Plaza and the garment industry

The Rana Plaza factory and office building collapsed early in the morning on April 24, 2013.

Property owner Sohel Rana, a local politician from the governing party Awami League, is said to have refused to close the building even though he knew the risk of collapse.

Sohel Rana tried to flee the country but was arrested shortly after the collapse and has been jailed since then. In 2016, a Dhaka court charged 41 people for involvement in the accident. 38 of them, including Sohel Rana, are charged with murder and risk the death penalty.

The garment industry employs around four million workers. It accounts for 12 per cent of Bangladesh’s gross domestic product and 80 per cent of its exports.

Bangladesh is the world’s largest clothing manufacturer after China. Its major competitive advantage is production costs.

The statutory minimum wage, due to be raised in 2018, is 5 300 taka or 63 USD per month. Garment workers at factories signed up to the Accord take home about 120 USD a month, including overtime.

The living wage – i.e., the income that allows a worker to support themselves and their family, pay for medical expenses and their children’s education, and save a small amount – is estimated at 25,687 taka or 305 USD per month.

Source: Clean Clothes Campaign
”We were huddled together in the stairwell, many cried and were scared. One person had broken their skull bone. When I saw the pouring blood, I started crying too,” says Shirin Akhter.


On the morning of April 24, rumours were swirling. The day before, large cracks had been discovered in the eight-storey Rana Plaza and the 5 000 garment workers who worked in it had been evacuated.
”Nobody wanted to go in, but the management said we would lose our jobs if we didn’t,” says Johora Khatun, 22.
Asma Begum, 28, walked up the stairs up to the factory’s third floor. For just under an hour, she and her colleagues sat by powerless sewing machines.
”Then they started the generator. Five minutes later, the building collapsed. I think it was the vibrations that did it.”
At 08.57am, the top floor collapsed. Asma Begum began running towards the exit as soon as she heard the sound. Shortly after, sha saw the ceiling coming down on top of her colleagues.
”I was sitting by the stairwell. But there were 1 000 people on my floor and not everyone made it out.”
Johora Khatun worked on the same floor, but further into the room.
”I started running but fell after a few metres.”
She was saved by a sewing table. Johora Khatun avoided being crushed but found herself stuck under concrete and rubbish.
”For the first few hours, I thought I might survive, but then I lost hope.
When rescue workers finally arrived, they could not reach Johora’s arms and had to pull her out of the rubble by her hair.
The search for survivors continued for weeks. The final death toll was recorded as 1 134. Another 2 500 were injured.
The Bangladesh garment industry had claimed fatalities before, but Rana Plaza put the working conditions in the international spotlight. The disaster was too big to ignore.
Just a few weeks later, the Accord on Fire and Building Safety in Bangladesh came into force. As a part of the five-year deal, about 200 international fashion companies committed to fund workplace improvements at their subcontractors.
”Thousands of things have been repaired and fixed. It has definitely contributed to a safer working environment,” says Petra Brännmark, communications manager at the global labour union IndustriAll, which was a key driver of deal negotiations.
The Accord ends in May. As of yet, 144 fashion companies have signed a five-year extension. The number of final signatories will give an indication of how highly the international buyers value the safety of the garment workers, now that the media has turned its spotlight off.
”Not all those who signed the first accord have signed the second one yet,” remarks Petra Brännmark.
The perception that the accord has been a success is shared by workers’ organisations in Bangladesh. Babul Akhter is the chairman of the trade union organisation BGIWF, which organizes 29,000 garment workers:
”Rana Plaza attracted the attention of the world and opened a small window for us. Much has changed. The working environment is better, and all factories have fire protection equipment now.”
But the price was high. It was paid by those who died. By those who lost their relatives. And by those who survived — but for whom life never became the same again.
One year after Rana Plaza, Shirin Akhter once again took up employment at a garment factory, but only managed five days before the panic attacks became too strong.
Without income, she is regarded as an economic burden for the family and her stepfather has decided she needs to get married.
”I would like to study,” she says. But my stepfather is the family’s only breadwinner. He decides.”
This story was originally published by Arbetet Global