Through our global network of local writers, we are continuing our award-winning coverage of global and local environmental challenges, with a focus on the people for whom the ecosphere matters in a direct way: rural dwellers who have little means to protect themselves against adverse conditions; communities that need to switch to sustainable development in order to survive; poor women and children, who are the most vulnerable in natural disasters.Sponsored by the United Nations Environment Program (UNEP), the United Nations Development Program (UNDP) and The World Bank (WB), IPS also maintains the award-winning Tierramérica, a specialised information service on environment and development. 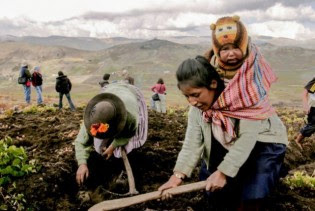 By IPS World Desk
The pilot version of a new index for measuring empowerment and the inclusion of women in agriculture was launched April 27 in Washington DC.

By Tharanga Yakupitiyage
While sustainable development may still seem elusive to some, a new initiative wants to pave a path for nations working towards a greener future.Partnering for Green Growth and the Global Goals 2030, or P4G, is a new partnership initiative that aims to boost countries’ efforts in achieving the globally adopted Sustainable Development Goals (SDGs).

By Mariela Jara
Getting children and adolescents to replace junk food with nutritious local organic foods is the aim of a group of women farmers in a rural area of Piura, on Peru’s north coast, as they struggle to overcome the impact of the El Niño climate phenomenon.

Can Sustainable Bioeconomy be a Driver of Green Growth?

By Frank Rijsberman
On April 19-20, I attended the second Global Bioeconomy Summit in Berlin. Bioeconomy is currently a hot topic for scientists and policymakers. Rapid advances in molecular biology combined with big data and artificial intelligence have resulted in big jumps in our understanding of living organisms as well as organic matter, the biomass produced by plants and animals, at the level of their DNA. That has gone hand in hand with technologies that allow scientists and industry to manipulate, easily, everything from enzymes to bacteria to plants and animals.

From Mega to Micro, a Transition that Will Democratise Energy in Brazil

By Mario Osava
An energy transition is spreading around the globe. But in Brazil it will be characterised by sharp contrasts, with large hydroelectric plants being replaced by solar microgenerators and government decisions being replaced by family and community decision-making.

Over to You, Children! Zambia’s ‘Plant a Million Trees’ Takes Root

By Friday Phiri
Trees are a vital component in the ecosystem—they not only give oxygen, store carbon, stabilise the soil and give refuge to wildlife, but also provide materials for tools, shelter and ultimately, food for both animals and human beings.

By Mengpin Ge and Kelly Levin
In the lead up to the historic Paris Agreement on climate change, adopted in 2015, more than 160 countries and the European Union submitted their own plans to address climate change, known as Intended Nationally Determined Contributions (INDCs).

Dreaming of A New Sustainable Economy

By Tharanga Yakupitiyage
Officials from around the world came together to create and support a vision for a new, sustainable economy: a bioeconomy.Almost 1000 bioeconomy experts, from former heads of state to civil society leaders, convened in Berlin for the second Global BIoeconomy Summit to discuss best practices and challenges.

By Maged Srour
Today the Food and Agriculture Organization (FAO) hosted an event at its headquarters in Rome, to present a set of eleven books jointly realized in collaboration with the Spanish newspaper El País.

Argentina Aims for a Delicate Climate Balance in the G20

By Daniel Gutman
As president this year of the Group of 20 (G20) developed and emerging nations, Argentina has now formally begun the task of trying to rebuild a consensus around climate change. It will be an uphill climb, since the position taken by the United States in 2017 led to a noisy failure in the group with regard to the issue.

By Emilio Godoy
Latin America is facing challenges in energy efficiency, transportation and power generation to move towards a low carbon economy and thus accelerate that transition, which is essential to cut emissions in order to reduce global warming before it reaches a critical level.

By Desmond Brown
At the start of 2017, the Caribbean Drought and Precipitation Monitoring Network (CDPN) warned eastern Caribbean countries that they were facing “abnormal climate conditions” and possibly another full-blown drought.

After More Than a Decade, Rights of Indigenous Peoples Not Fully Realized

By Miroslav Lajčák
First, I want to talk about how we got here.It was nearly 100 years ago, when indigenous peoples first asserted their rights, on the international stage. But, they did not see much progress. At least until 1982 - when the first Working Group on Indigenous Populations was established.

By Issa Sikiti da Silva
Thousands of logs loaded into makeshift boats at the port of Inongo at Lake Mai-Ndombe stand ready to be transported to Kinshasa, the capital of the Democratic Republic of Congo (DRC).

By Zadie Neufville
The Caribbean Community Climate Change Centre (CCCCC) also known as the 5Cs, is looking for ways to boost the region’s access to the Green Climate Fund (GCF).

Drowning for Progress in Cambodia

By Pascal Laureyn
Suddenly the road ends. The cart track disappears under the water. A vast lake stretches out in front of me. I have to transfer from a motorbike to a canoe. "Tuk laang," my guide says coolly. "The water is rising."