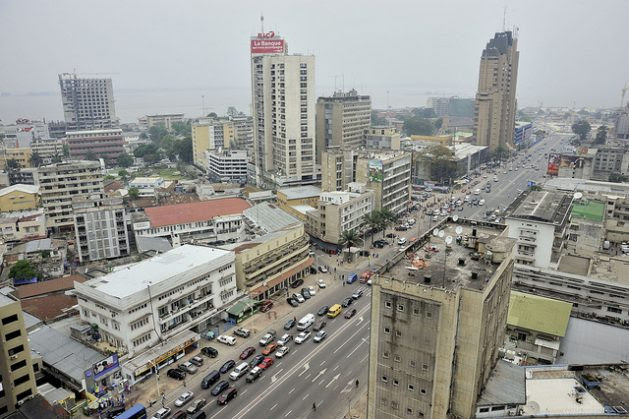 African cities are prone to feeling the effects of climate change. Pictured here is the Democratic Republic of Congo capital, Kinshasa. Credit: Einberger/argum/EED/IPS
UNITED NATIONS, Apr 27 2018 (IPS) - While sustainable development may still seem elusive to some, a new initiative wants to pave a path for nations working towards a greener future.
Partnering for Green Growth and the Global Goals 2030, or P4G, is a new partnership initiative that aims to boost countries’ efforts in achieving the globally adopted Sustainable Development Goals (SDGs).
By creating and accelerating public-private partnerships, P4G could provide market-driven solutions to real life challenges in developing nations.
“There is an increasing conviction and need that to solve some of the more challenging problems, people are wanting an inter-disciplinary forum where they can talk to financiers, companies, banks…they want a forum like that and they want a forum to be quick, practical, and action-oriented,” Global Green Growth Institute’s (GGGI) Assistant Director-General and Head of its Investment and Policy Solutions Division Mahua Acharya told IPS.
“P4G is really one of those coalitions that is responding to needs…where you can bring private companies, governments, and others together and try to get around a single problem,” she continued.
Established by the Government of Denmark, the initiative will bring together leaders in government, civil society, and business to work together in five key sectors in sustainable development: food, water, energy, healthy cities, and circular economy.
But why these sectors in particular?
“Because they present the biggest climate change challenges,” Acharya told IPS.
The world’s cities emit up to 70 percent of the world’s carbon dioxide—and the figure is likely to be even higher when consumption emissions are included, one of P4G’s organizational partners C40 Cities found.
As city populations are predicted to double by 2050, the amount of carbon emissions is only expected to increase.
In response, cities such as New York have already begun to step up and lead the way against climate change.
Despite the United States’ announced withdrawal from the landmark Paris climate accord, New York aims to cut its carbon emissions from buildings by 30 percent by 2025 and 80 percent by 2050.
Buildings account for almost three quarters of the Northeastern American city’s contribution to climate change.
Like what P4G represents, New York’s government has partnered with leaders in the private and non-profit sectors in order to achieve its ambitious goal. With assistance from the Mayor’s Office, a number of partners from universities, hospitals, and commercial offices have already met their 30 percent goal.
Acharya also pointed to the role that innovative partnerships have played in food waste.
Around the world, entrepreneurs have launched apps to help reduce food waste among households, restaurants, and supermarkets.
In the United Kingdom, FoodCloud allows supermarkets and farms to work with charities in order to donate surplus food, while YourLocal in Denmark gives consumers a discount to food that would otherwise go to waste.
According to the Food and Agriculture Organization of the United Nations (FAO), food loss and waste account for 3.3 billion tons of carbon dioxide each year.
Food waste is also a major source of other greenhouse gases such as methane, a pollutant that is at least 25 times more potent than carbon dioxide.
With apps like FoodCloud and YourLocal, stakeholders can work together to create a cleaner, greener society.
Though it will take time for P4G’s partnerships to have concrete results, the initiative acts as a foundation to get the conversation started.
“Can the public sector start to work with private companies towards a solution—short-term, quick, commercial, action-oriented solutions? Can private companies offer solutions that are not just observing but are creating solutions to issues affecting society? They need to come a little closer together and try to speak the same language,” Acharya told IPS.
Over 400 public-private partnerships from over 80 countries have applied to receive funding or support through P4G, proposing a range of solutions to drive sustainable development.
“It was really encouraging, I saw some really revolutionary ideas…I’m very inspired by these partnerships,” Acharya said.
Launched in 2017, P4G awards up to 4 million dollars annually to help between 10-15 partnerships and accelerate sustainable development solutions. Winners will be announced at the first P4G Summit in 19-20 October 2018 in Copenhagen, Denmark.