Naroda Patiya case: Will Maya Kodnani be more in demand in the BJP after her acquittal? | The Indian Express

Naroda Patiya case: Will Maya Kodnani be more in demand in the BJP after her acquittal? | The Indian Express

Naroda Patiya case: Will Maya Kodnani be more in demand in the BJP after her acquittal?

Among the only people who met Kodnani after her conviction was RSS chief Mohan Bhagwat, when she was in the Civil Hospital in Ahmedabad as a prisoner suffering from heart disease, tuberculosis and depression. 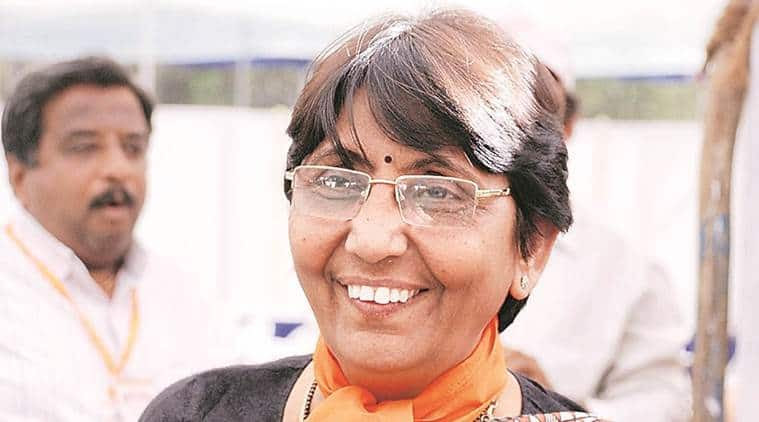 Naroda Patiya case: Gujarat High Court acquitted former BJP minister Maya Kodnani, 17 others. file photo
Even as Naroda Patiya smouldered after mobs burnt it down to kill 97 Muslims to avenge the killing of kar sevaks on the Sabarmati Express on February 27, 2002, the then chief minister Narendra Modi went to visit the sites where major massacres had taken place. Among the people accompanying him, apart from the police officers, was the then Naroda MLA Dr Maya Kodnani.
Six years later, she was arrested for ‘instigating mobs’ to kill Muslims. And eventually convicted for masterminding the largest single incident of the killing of Muslims in the Gujarat riots.
Maya Kodnani’s rise had been as swift as her fall.
From a firebrand leader who protested on the streets against temple demolitions by the Ahmedabad Municipal Corporation, when she was a corporator of the ruling BJP in the post-Babri Gujarat of 1990s, to joining protests against the US’ visa denial to Modi in 2005 over the Gujarat riots, as the BJP’s Ahmedabad city unit president (the first woman to hold the position), Kodnani, a practising gynaecologist, rose to become the minister for women and child welfare in the Modi government. Also Read: Naroda Patiya massacre: Gujarat High Court acquits former BJP minister Maya Kodnani,17 others
Top News
She was among the key women BJP leaders who were rooted in the RSS and owed their rise to Modi. They used to be referred to as “AaBha-RaMa” (for Anandi Patel, Bhavna Dave, Ramila Desai and Maya Kodnani). Anandiben, who continues to be close to Modi, went on to become chief minister and is now the Madhya Pradesh governor. Dave was Ahmedabad’s first woman mayor and went on to become Lok Sabha MP. She now heads the University Granth Nirman board. Desai, who was Ahmedabad district panchayat chief, contested assembly elections in 2002, but was suspended from the party in 2005 when she accused Modi of “plotting to kill her”. Kodnani, like Desai, contested her first assembly seat in 2002. Godhra: Burnt bogies of Sabarmati Express train. (Source: Express Archive)
Mentored by party patriarch LK Advani, Maya Kodnani won the 2002 elections riding on the Hindutva wave that followed the Gujarat riots (in which nearly 1200 people were killed), by a thumping majority. In 2007, she was minister of state for women and child development and elevated as a ranking Cabinet minister with additional charge of higher education. Also Read: Naroda Patiya verdict: Closeted in her bungalow, Maya Kodnani had ‘tears of joy’ in her eyes
When she was awarded the 28-year jail term for the murder of 97 Muslims in the Naroda Patiya post-Godhra riot case by a special trial court in 2012, she told the court in her defence that she was a “victim of politics”, a plea that was dismissed by the trial court at the time.
Around that time, too, things were changing for Modi.
After the SIT summoned him for questioning in 2010 but found no evidence to prosecute, the Supreme Court in 2011 left it to the magisterial court in Gujarat to decide on Zakia Jafri’s petition accusing him of culpability in the riots – the first sitting chief minister to be questioned in a communal riot case, the BJP would say. A relieved Modi launched a fast, calling it the “Sadbhavna mission” to reach out to minorities, especially Muslims. In 2012, the magisterial court gave Modi a clean chit.
Exactly a year before Modi fought the Lok Sabha elections to become prime minister, the government in Gujarat was preparing to seek death penalty for 10 people accused in the Naroda Patiya case. The list included Kodnani. The BJP touted it as a move purported to impress public opinion as “fair”. The proposal, however, was dropped for want of positive “legal opinion. ”
Kodnani’s conviction also became a talking point for the BJP against the Congress, as “the first communal riot case in which a minister is convicted”, when parallels were drawn between the handling of the Gujarat riots vis-a-vis the anti-Sikh riots of 1984.
But within the BJP, comparisons began to be drawn between her fate and that of Amit Shah. Named by the CBI as the “mastermind” in the Sohrabuddin Sheikh alleged fake encounter, Shah was made national president of the BJP soon after he was discharged from the case. Kodnani, named in the Naroda cases in 2008, was declared absconder by the Supreme Court-appointed Special Investigation Team (SIT) in 2009 and resigned as a minister only to surrender and go to jail.
The curtains fell on both her careers, as a gynaecologist and politician.
Among the only people who met Kodnani after her conviction was RSS chief Mohan Bhagwat, when she was in the Civil Hospital in Ahmedabad as a prisoner suffering from heart disease, tuberculosis and depression.
As the Modi government at the Centre began to put the Gujarat riots behind it, VHP leader Pravin Togadia who nursed political ambitions, saw the convictions of the VHP, Bajrang Dal workers in the riot cases as a “setback for Hindus”. Maya Kodnani was acquitted by the Gujarat High Court in the 2002 Naroda Patiya massacre case on Friday. (AP photo/File)
Gujarat Patidar quota leader Hardik Patel stoked the fire by blaming Modi for “putting Hindus in jail” in the 2002 riot cases, while campaigning in the Assembly elections last year. He spoke for the Patels. In the riot cases in Anand and Mehsana districts especially, it was the Patels that had been mostly convicted. Babu Bajrangi was also a Patel, with origins in Kutch.
Unlike 2002, when the riots polarised the votes and the BJP won its highest ever seats at 127 in the Gujarat assembly, last year the party just made it past the half-way mark at 99 seats of 182, largely owing to the Patidar factor which is also the dominant farming community in Gujarat.
Last year, the tide too began to turn in Kodnani’s favour. Amit Shah agreed to depose as a witness defending her in the Naroda Gam case – in which 11 Muslims died – the only one of nine cases supervised by the Supreme Court that is pending judgment. Al ong with Kodnani and Bajrangi, VHP leader Jaideep Patel is also a prime accused in this case .
Kodnani asked Shah to defend her alibi of not being present at Naroda on February 28, 2002, when the massacre took place. Shah told the court in September last year how he, then a legislator from Sarkhej constituency had seen Kodnani in the Gujarat assembly where a condolence resolution was passed for the victims of the Sabarmati express tragedy, and then again at the Civil hospital in Sola, (then on Ahmedabad’s outskirts), where the burnt bodies had been brought, from where he and Kodnani had left together.
Whether the trial court accepts the alibi, we will soon know, but the observations of the Gujarat High Court could possibly have a bearing on this case. The trial court had relied on witness statements to convict Kodnani , so the observations of the High Court could help in giving her the benefit of doubt. Moreover, rights activist Teesta Setalvad, actively involved in getting justice for the riot victims, is facing serious charges herself on several counts.
Here’s a minor detail in the continuing Naroda Patiya story – the four per cent Muslim population is mostly from Karnataka. With elections in that state taking place in a few weeks time, a BJP MLA has already kicked up a storm by declaring it as “Hindus vs Muslims” contest.
What happened in Naroda Patiya
Now both Amit Shah and Maya Kodnani were among the MLAs who won with consistent huge margins in their constituencies, both of which were part of the Gandhinagar parliamentary constituency represented by Advani.
As the BJP seeks to rebuild the Hindutva wave on which it hopes to ride the 2019 elections, it will surely need the backing of the RSS which has sometimes been seen to be critical of the Modi government at the Centre.
Kodnani’s acquittal is being seen inside the BJP as a confidence-building measure ahead of the general elections. In fact, through the acquittal of Swami Aseemanand in the Mecca Masjid blast case as well as the clean chit given to Judge Loya, the BJP is already shoring up its own defence against the Congress, which it has accused of “conspiracy.” The two acquittals and the clean chit may well become a core part of the campaign pitch in the 2019 elections.
As for Kodnani, her silence through her period of conviction could earn her the requisite political rehabilitation. Slowly and surely, the stage is being set in this last year in the run-up to the polls.
For all the latest Opinion News, download Indian Express App
© IE Online Media Services Pvt Ltd
More From Leena Misra