Women make up half the world's population, but don't nearly share half of the world's wealth, well-being and opportunity. Two-thirds of the world poor are women, disproportionally exposing women to precarious living conditions, disease and unmitigated natural disasters. The media, meanwhile, remains a male-dominated sector in much of the world, contributing to women's voices lacking a crucial amplifier to put their concerns on political agendas and unleash the development potential of their ingenuity. Rather than then stereotypical victims of local and global forces, women are also organizer, innovators, conservators and community builders. These are some of their stories 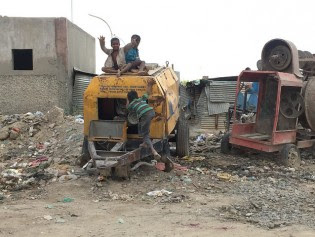 By Joseph Chamie
Premarital sex, defined as voluntary sexual intercourse between unmarried persons, is increasing worldwide. While traditional values, religious instructions and the laws of some countries continue to prescribe abstinence until marriage, the rapid societal changes that have occurred across all regions during the past half-century have resulted in the growing prevalence and acceptability of premarital sex.

By Thalif Deen
The 193-member General Assembly – one of the highest policy-making bodies at the United Nations – will get a much-needed break, come September, when a woman will preside over its 73rd session, only the fourth in the history of the world body.

By Devi Asmarani
More than a century has passed since Putri Mardika, Indonesia’s first ever women's organization, was established but challenges persist in the efforts to influence national politics to bring progress to all women.

By Jeannette Urquilla
Mayra Veronica Figueroa Marroquin (34) was released from prison earlier this month after serving time for what she argued was a miscarriage. Her sentence was reduced from 30 years to the 15 years she had already spent behind bars.

Accelerating Universal Health Coverage in Kenya-How do we get there?

By Werner Schultink and Rudi Eggers & Siddharth Chatterjee
The Government of Kenya has prioritized universal health coverage (UHC) in its Big 4 agenda over the next 5 years.This is a significant and perhaps the most important strategic priority. Why? Every year over a million Kenyans get trapped into poverty because of a catastrophic out of pocket payments due to health reasons.

Sexual Abuse Where UN Chief has No Jurisdiction to Act

By Thalif Deen
As sexual harassment charges in the UN system keep piling up, the UN Secretariat has a new administrative problem on its hands: accusations of sexual abuse in the New York office of the International Civil Service Commission (ICSC) whose members are elected by the 193-member General Assembly – but not answerable either to the Secretary-General or the President of the Assembly.

Africa’s Corporate Boardrooms: Where are the Women?

By Kwamboka Oyaro
When a woman rises to the top rung of the traditionally all-male corporate ladder in Africa, it’s front-page news because women’s progress in business leadership on the continent continues to be achingly slow.

A Pledge for Parity

By Ann-Kathrin Pohlers
With March marking Women’s History Month, the debate over gender-based discrimination couldn’t have reached its new peak at a more critical time.

By Geetika Dang , Vani S. Kulkarni and Raghav Gaiha
Dowry deaths rose from about 19 per day in 2001 to 21 per day in 2016.It is indeed alarming that the rise in dowry deaths is unabated despite greater stringency of anti-dowry laws. In 1961, the Dowry Prohibition Act made giving and taking of dowry, its abetment or the demand for it an offence punishable with imprisonment and fine or without the latter. This was an abysmal failure as dowries became a nationwide phenomenon, replacing bride price. More stringent laws followed. The Criminal Law Amendment Act in 1983 inserted a new section (498-A) to deal with persistent and grave instances of dowry demand and such offences were punishable with imprisonment extendable to three years. As cases of brutal harassment and dowry deaths continued to rise, another Act was passed in 1986, relating specifically to the offence of dowry death.

The Role of Law Schools in Shaping Global Gender Justice

By Rangita de Silva de Alwis
March 8th, 2018, International Women’s Day, saw an extraordinary global mobilization for gender equality. In the last year, global movements for gender equality-- from marches to powerful grassroots organizing and viral social media campaigns, such as #MeToo and #TimesUp in the United States and other countries-- have galvanized the world’s attention like never before.

By Siddharth Chatterjee
Mr. Maina Kiai’s account (Nation, 24 February) of the exciting dialogue hosted at Stanford University, USA does not present a true account of what transpired at that meeting.

By Tharanga Yakupitiyage
The United Nations Headquarters and Brooklyn Bridge were lit up on Thursday night not to help tourists navigate the major landmarks but to bring attention to a key issue that many women and girls face today: period poverty.

We can no longer accept discrimination of half of the world’s population, says Chair, Geneva Centre

By Geneva Centre
On the occasion of International Women’s Day 2018, celebrated on the 8th of March, the Chairman of the Geneva Centre for Human Rights Advancement and Global Dialogue, Dr. Hanif Hassan Ali Al Qassim reiterated the importance of empowering and giving a voice to women worldwide so as to achieve gender equality. “This year, the International Women’s Day is celebrated against the backdrop of an unprecedented mobilization for women’s rights, equality and justice” stated Dr Al Qassim. From the private sector, to the film and art industry and the political scene, women worldwide have been joining their voices, coming together to denounce discrimination, violence, sexual harassment and abuse. In this context, according to UN Women, the theme for International Women’s Day 2018 is “Time is now: Rural and urban activists transforming women’s lives”.

By Sally Nyakanyanga
Tapiwa Moyo, 40, religiously leaves her home each day when the first cock crows and joins a throng of women who have taken up artisanal mining in her community.

By Mario Osava
"Here we empower women and we do not tolerate domestic violence, which we treat as our own, not as an intra-family, issue," says Lurdinha Lopes, a leader of the squatting movement in Brazil.

By Mavic Cabrera-Balleza
I am one of millions of women who posted #MeToo on social media. The call to post was like a flash of light that brought back vivid memories of cat calls, male colleagues making passes, lewd jokes, men rubbing their bodies against mine in packed buses and trains and a man in an act of public sexual self-gratification on the subway.

By Lakshmi Puri
When we celebrate the International Women’s Day (IWD) this year we shine the brightest light on the vast majority of women - especially in developing countries that live and work in rural areas and whose empowerment is about bringing the farthest left behind to the forefront of being the prime beneficiaries and drivers of sustainable development, peace and security, human rights and humanitarian action.

A Fair Reflection? Women and the Media

By Audrey Azoulay
Information and communication technologies have the potential to open up new worlds of ideas and the media - television, newspapers, advertising, blogs, social networks, film – is increasingly omnipresent in the lives of many of us. In line with one of the major themes of this year’s Commission on the Status of Women, UNESCO is assessing how the media and ICTs shape the lives of women.

Ensuring Equality & Inclusion Essential to Weed Out Roots of Extremism

By Ambassador Anwarul K. Chowdhury
In the next seven days two of the biggest events that drive the women’s equality agenda will energize all well-meaning people of the world. The first on 8 March the International Women’s Day will assert renewed energy for women’s activism for peace, rights and development.