Bharat Bandh: The Ministry of Home Affairs said it was closely monitoring the situation and was in constant touch with the affected states after violent protests erupted during the nationwide bandh. Protests during the nationwide Bandh in Ludhiana. (Express Photos by Gurmeet Singh)
In Madhya Pradesh, four persons were killed and five others sustained gunshot wounds as clashes erupted in Morena, Gwalior, and Bhind districts forcing the authorities to clamp curfew in parts of these three districts and impose prohibitory orders in Sagar, Datia and Balaghat districts.
In Uttar Pradesh, a person was killed and nearly 75 persons including 40 policemen were injured in violent protests during the bharat bandh called by Dalit groups. Around 448 people were detained on various charges including arson and damage to public property, police said. In Rajasthan, one person was killed and 26 others, including nine policemen, were injured in Khairthal in Rajasthan’s Alwar district during the protests.
Normal life was disrupted in many states as Dalit protesters blocked trains, clashed with police and set ablaze vehicles in violent protests, officials said. Transport and communications services were severely hit in many states with over 100 trains getting affected. Many trains, including premier Rajdhani and Shatabdi expresses, were stopped by protestors while some were short-terminated as precautionary measures. Protests on Railway tracks during the nationwide Bandh in Ludhiana. (Express Photos by Gurmeet Singh)
While some states ordered closure of educational institutions, and curtailed internet and mobile services, incidents of arson, firing and vandalism were reported from Madhya Pradesh, Rajasthan, Uttar Pradesh, Bihar and Punjab, among other states.
The CBSE postponed Class 12 and Class 10 examinations scheduled to be held today in Punjab at the request of the state government in view of the ‘Bharat Bandh’.
In Delhi, protesters squatted on tracks at several places, stopping trains, including the Dehradun Express and the Ranchi Rajdhani, while a Northern Railway official said services were also disrupted by a mob in Ghaziabad. The protesters gathered at Mandi House in Delhi and blocked roads. Shouting slogans of ‘Jai Bhim’, the protesters also blocked one of the carriageways of Barakhamba Road affecting traffic movement on the stretch, police said.
Why are the Dalits protesting ?
On March 20, the Supreme Court had diluted certain provisions of the SC/ST (Prevention of Atrocities) Act in a bid to protect ‘honest’ public servants discharging bona fide duties from being blackmailed with false cases under the Act. However, the verdict elicited strong reactions from the Dalits and the Opposition who claim that the dilution of the Act will lead to more discrimination and crimes against the backward community.
In its March 20 judgment, a bench of Justices A K Goel and U U Lalit had expressed concern that “working of the SC/ST Atrocities Act should not result in perpetuating casteism” and went on to lay down certain procedures to keep a “check on false implications of innocent citizens on caste lines”. 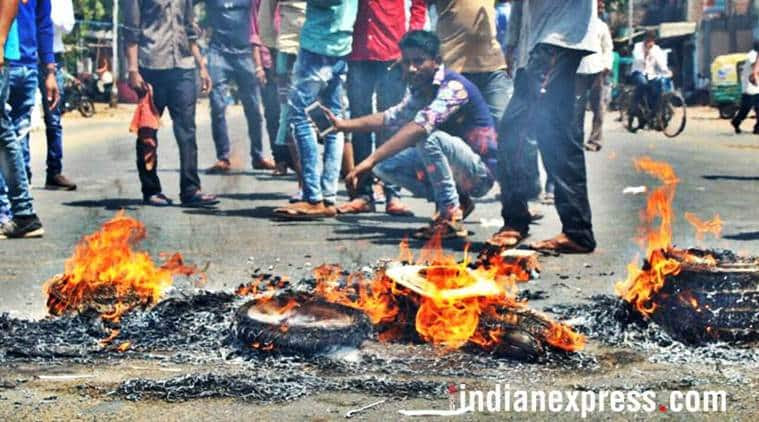 The Centre has moved a review petition in the Supreme Court on Monday. (Express Photo by Javed Raja)
Flagging “rampant misuse” of the Act, the two-judge bench said it was being used “as an instrument to blackmail or to wreak personal vengeance”, and allowed anticipatory bail for the accused in certain cases.  The court also mandated prior sanction by a superior officer before the arrest of an accused, and brought in a provision for a preliminary inquiry — all of which have been criticised as potentially diluting the scope for justice for the victims of atrocities. READ | Rising pendency, falling convictions: what data on SC/ST Act trials show
Centre seeks review of SC/ST verdict, SC declines urgent hearing on similar plea
Earlier in the day, the Centre moved the Supreme Court seeking review of its recent verdict by which safeguards were put on the provisions of immediate arrest under the Act. However, the apex court declined urgent hearing on a writ petition filed by All India Federation of SC/ST Organisations claiming that the entire nation has witnessed large-scale violence during today’s ‘Bharat Bandh’. The court said the plea would be listed and heard in due course.
In its review petition, the union government said the March 20 verdict has “wide ramification and implication resulting in dilution of the stringent provisions of law enacted under the 1989 enactment. It adversely affects a substantial portion of the population of India being the members of SC/ST. It is also contrary to the legislative policy of Parliament as reflected in the Prevention Of Atrocities Act 1989”. 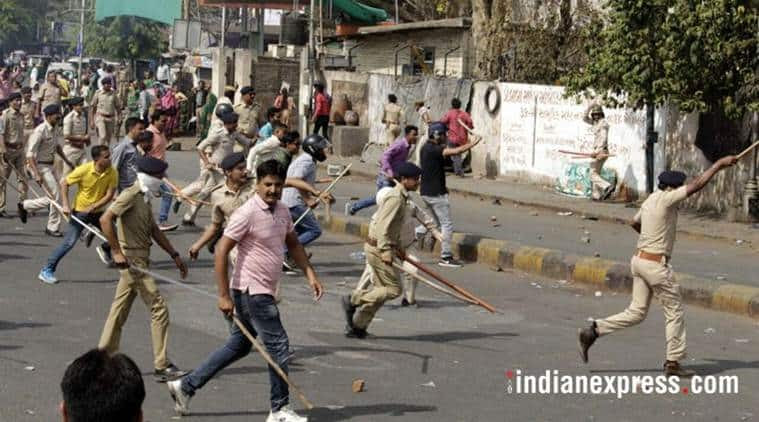 Normal life was disrupted in many states as Dalit protesters blocked trains, clashed with police and set ablaze vehicles in violent protests, officials said (Express Photo: Javed Raja)
Justifying the petition, the Centre said that despite various measures to improve the socio-economic conditions of the SCs and STs, they still remained vulnerable. “They are denied a number of civil rights. They are subjected to various offences, indignities, humiliations and harassments. They have, in several brutal incidents, been deprived of their life and properties, serious crimes are committed against them for various historical, social and economic reasons,” it said. READ | SC/ST Act: Centre files review petition in Supreme Court, Ravi Shankar says verdict needs to be reconsidered
How politicians reacted to the protests
Reviving his attack on the RSS-BJP combine, Congress president Rahul Gandhi said he saluted “brothers and sisters” from the Dalit community who have hit the streets to demand protection of their rights from the Modi government. “It is in the DNA of the RSS/BJP to keep Dalits at the lowest level in Indian society. Any one who challenges this thought is crushed with violence. Our Dalit brothers and sisters are today on the streets demanding protection of their rights from the Modi Government. We salute them,” he said on Twitter.
BSP chief Mayawati also launched a blistering attack on the BJP-led central government over the ‘delay’ in filing the review petition against the Supreme Court verdict. Addressing the media in the party office, Mayawati said, “The central government took a lot of time in filing the review petition against the Supreme Court verdict on the SC/ST Act. Had they filed the review petition in time, there wouldn’t be any protests or Bharat bandh.” The BSP chief, however, condemned the violence and clarified that the BSP has no role in the violence. 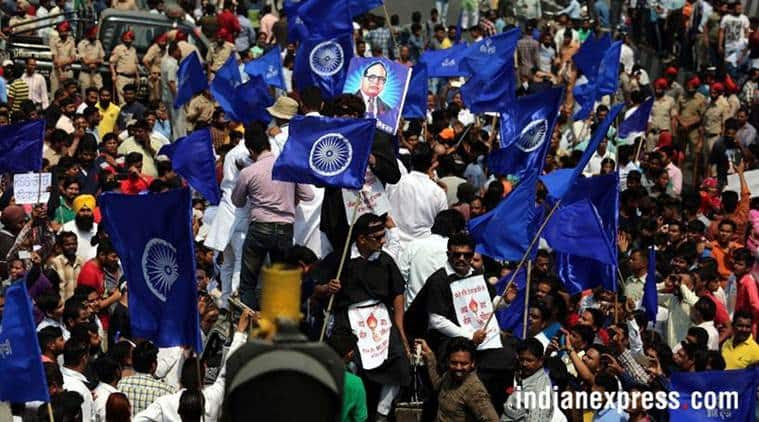 (Express Photos by Gurmeet Singh)
“The protest is justified. I support it. However, I have got to know that some people are spreading violence during the protests. I strongly condemn this. Our party is not behind the violence. I urge the authorities to initiate strong action against the culprits,” she said.
While Union Home Minister Rajnath Singh appealed for peace, Law Minister Ravi Shankar Prasad said the government was not a party to the Supreme Court decision on the SC/ST Act and “respectfully” did not agree with its reasoning behind the verdict.
Union Minister Ram Vilas Paswan, a prominent Dalit leader and head of NDA constituent LJP, appreciated the government’s quick decision to file the petition and accused the Congress of having done nothing for Dalit icon B R Ambedkar.
Senior Congress leader Ghulam Nabi Azad alleged that incidents of atrocities on Dalits and minorities have increased in the country since the NDA came to power in 2014, while AAP leader and Delhi Chief Minister Arvind Kejriwal extended his support to the protesting groups.
Uttar Pradesh Chief Minister Yogi Adityanath also appealed for peace and urged the people not to vitiate law and order.
With PTI inputs
For all the latest India News, download Indian Express App
© IE Online Media Services Pvt Ltd
Publicado por salud equitativa en 14:22