After More Than a Decade, Rights of Indigenous Peoples Not Fully Realized | Inter Press Service

After More Than a Decade, Rights of Indigenous Peoples Not Fully Realized | Inter Press Service

After More Than a Decade, Rights of Indigenous Peoples Not Fully Realized

Print | Send by email
Miroslav Lajčák, is President of the UN General Assembly 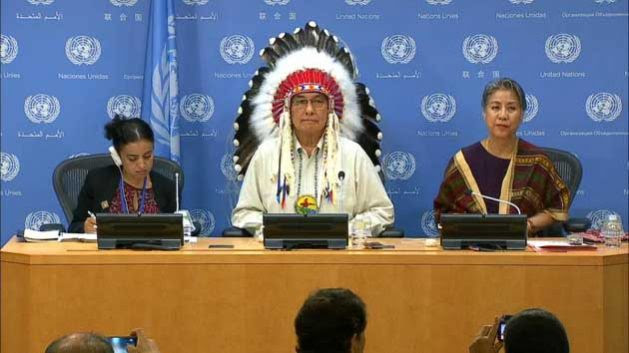 A UN press conference on indigenous peoples. Credit: UN Photo
UNITED NATIONS, Apr 18 2018 (IPS) - First, I want to talk about how we got here.
It was nearly 100 years ago, when indigenous peoples first asserted their rights, on the international stage. But, they did not see much progress. At least until 1982 – when the first Working Group on Indigenous Populations was established.
And, in 2007, the rights of indigenous peoples were, finally, set out in an international instrument.
Let us be clear here. Rights are not aspirational. They are not ideals. They are not best-case scenarios. They are minimum standards. They are non-negotiable. And, they must be respected, and promoted.
Yet, here we are. More than a decade after the Declaration on the Rights of Indigenous Peoples was adopted. And the fact is, these rights are not being realized.
That is not to say that there has been no progress. In fact, we heard many success stories, during yesterday’s opening of the Permanent Forum.
But, they are not enough.
Which is why, as my second point, I want to say that we need to do much more.
Last September, the General Assembly gave my office a new mandate. It requested that I organise informal interactive hearings – to look at how indigenous peoples can better participate at the United Nations.
So, that is why we are all sitting here. But, before we launch into our discussions, I want to acknowledge the elephant in the room.
I know that many of you were disappointed, with the General Assembly’s decision last year. After two years of talking, many of you wanted more than these interactive hearings.
We cannot gloss over this. And that is why I want to address it – from the outset. But I must also say this: Things may be moving slowly. But they are still moving.
When our predecessors formed the first indigenous working group, in 1982, their chances were slim. Many doubted whether an international instrument could be adopted. And, frankly, it took longer than it should have. But, it still happened.
So, we need to acknowledge the challenges, and frustrations. We cannot sweep them under the rug.
But we also cannot let them take away from the opportunities we have, in front of us.
And that brings me to my third point, on our discussions today.
This is your hearing. So, please be blunt. Please be concrete. Please be innovative.
Like I have said, we should not pretend that everything is perfect. Major problems persist – particularly at the national level. And, we need to draw attention to them. Today, however, we have a very specific mandate. And that is, to explore how we can carve out more space, for indigenous peoples, on the international stage.
That is why I ask you to focus on the future of our work, here, at the United Nations. And to try to come up with as many ideas and proposals as possible.
In particular, we should look at the following questions:
Which venues and forums are most suitable?
What modalities should govern participation?
What kind of participants should be selected?
And how will this selection happen?
We should also try to form a broader vision. This will allow us to better advise the General Assembly’s ongoing process to enhance indigenous peoples’ participation.
Finally, next steps.
As you know, this is our very first informal, interactive hearing. There will be two further hearings – next year, and the year after.
Then – during what we call the 75th Session of the General Assembly – negotiations between governments will start up again.
Turning back to today, the immediate outcome of our hearing will be a President’s Summary. But, I am confident that the longer-term outcome will be yet another step, in the direction of change.
So, this is where I will conclude. My main job, now, is to listen.