SENT FOR HOUSE WORK: MANY TRICKED INTO SEX WORK 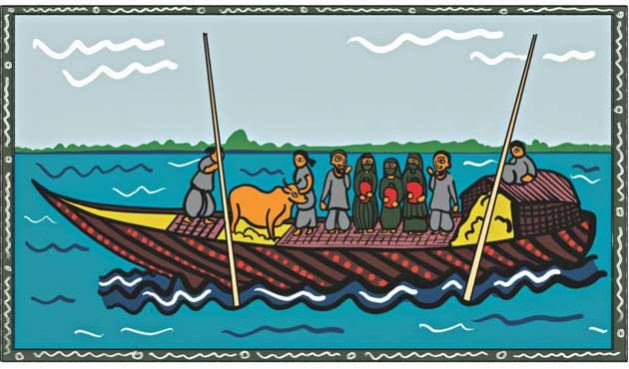 Illustration: SHARARA ZAHEEN
May 24 2019 - Little-educated women from remote villages find themselves sold as sex-workers in the Middle East, because neither the government nor recruiting agencies can authenticate foreign employers seeking housemaids.
Her home is two boat rides away from central Narsingdi—first, a boat drops you off on the outermost banks of the char, and then after crossing half a mile across the sandy islet, a smaller dinghy takes you down a canal that feeds into the body of char. On either side of the sediment-heavy canal is pure unadulterated beauty—long sandy banks that get overridden with the tall grassy kashful in autumn, followed by lush green woodlands deeper inland. The only other traffic in the canal are families of waddling ducks and the rare clique of kids splashing about. The dinghy drops you at a place where you get your first glimpse of a paved road—that too, one that is barely wide enough to fit a single battery-run three-wheeler that you have to take all the way to the very end of the road. From there her home is once again a half mile away across fields.
Her landless parents work as sharecroppers on other people’s fields where the going-rate is Tk 60 per day, making their family “ultra-poor” in academic terms. As a result, neither Kohinur, nor her younger brothers and sisters have completed even primary school. Scat trails around the house points out that the family practices open defecation.
So, when this teenager was approached a local broker named Badol, offering her a job as a housemaid with a Tk 18,000 monthly salary in Saudi Arabia, her parents found no reason to say no. “We thought she was going to the land of Makkah and Madina, she was going to be close to Allah, so we chose to send her,” says her mother, a woman who is barely in her forties, but looks decades older as a result of a life of hard labour.
Kohinur was stuffed into a head-to-toe black burkha to get her passport photo taken. The tiny nervous face peering through the burkha’s visor in her official portrait, was passed off as a 26-year-old married woman with two children in her passport, because it is not legal to send any woman under the age of 25 abroad. Then, clutching her fabricated passport, the teenager left her pristine homeland on a town-bound boat loaded with harvest, livestock, farmers and traders—the only vessels large enough to ply the Meghna river. 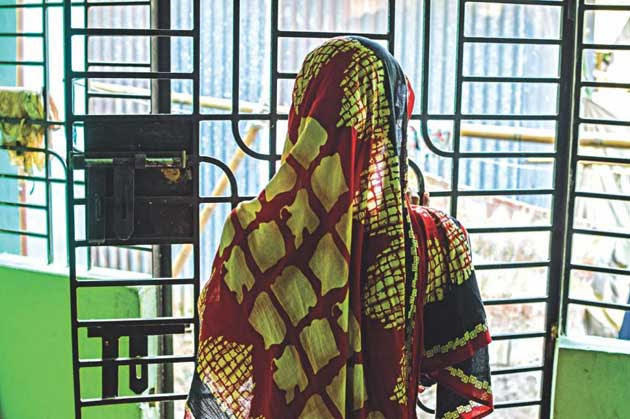 Atiyah was sold to a brothel in Lebanon by brokers of a government accredited recruiting agency.
Her recruiting agency, M/S Biplob International, secured a work clearance for her from the Bureau of Manpower, Employment and Training (BMET), and her details were uploaded to a database run by the Saudi government. They then matched her up with an employer who said he was looking for a housemaid. Kohinur flew out on October 30, 2018.
But once she reached Saudi Arabia, she realised that the house was not a family home; it was a brothel.
“They traded her like we trade goats and cattle,” says Kohinur’s mother, “Every day in the evening, men would come to the home to take her and return her by the morning.” Sometimes the customers took her for days, and one even kept her for a month.
“They beat her twice a day with wound up cables. She begged one of the other girls in the brothel to let her use a phone to call us. We informed the broker Badol that our daughter is in a brothel, and to prove that, she had to manage a video call. The girls helped her,” describes her mother.
The broker demanded Tk 45,000 from the family to bring back the girl. “We loaned the money from a moneylender at a steep interest,” says the mother. Kohinur finally came back on January 13, 2019.
“We got her married last month to a construction worker, before word spread that she was made to do sex work in Saudi Arabia. She is not 18 yet. Such is the luck of my daughter, that her husband was too poor to even buy her a wedding sari. They gave her a normal cotton sari, and a cotton salwar kameez set,” laments the mother. 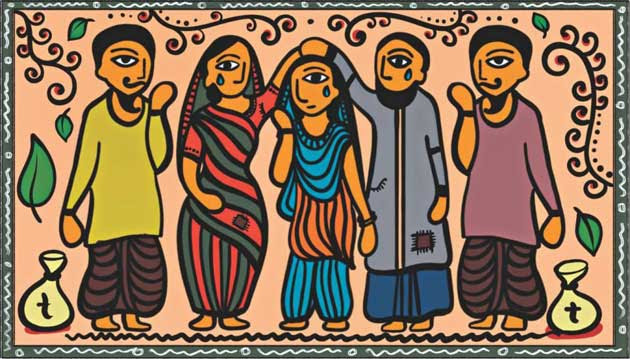 Illustration: SHARARA ZAHEEN
Just a few miles away, on the same char, another ultra-poor family’s daughter was also sent to Saudi Arabia to do sex work. 25-year-old Armin* and her two children were abandoned by her husband, leaving her to live with her parents. Her father barely scrapes a living by picking peanuts on others’ land. Her home is a broken-down one-roomed shanty shared with their livestock. Cooking fuel made with dried cow dung and grass were stacked up to the ceiling by the foot of the bed, making the entire room smell—but they have nowhere else to keep it.
“They threw my daughter off the second floor of the brothel because she refused to give in to their demands,” says Armin’s mother. Armin survived the fall, but now has a crippled arm and a foot. The doctors had to surgically insert a rod into her leg to mend the fracture. A long scar extends from her upper arm to her shoulder, where the skin had split upon impact. Another scar nestles between her eyebrows on her forehead. The fall also broke two of her front teeth. A disabled, penniless Armin was deported from Saudi Arabia and sent back to Bangladesh on June 8, 2018.
Both Kohinur and Armin had gone through legal channels. The BMET had cleared them for work. A Saudi government-accredited recruiting agency from Saudi Arabia had uploaded the details of their employers to a database system that is accessible to the recruiting agencies in Bangladesh and the BMET—so both of them were aware of whom the women were being sent to. How is it that after Kohinur and Armin were legally sent to Saudi Arabia, they ended up doing sex work?
It seems as if every single person and body involved in Bangladesh send these women abroad like throwing a stone in the dark and hoping it hits the target. In spite of the introduction of digital database systems for employers and microchip-enabled smartcards for workers, nobody in Bangladesh has any way to verify whether the employers are legit. 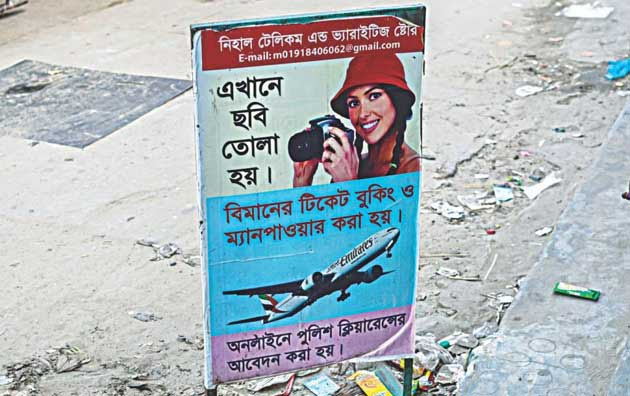